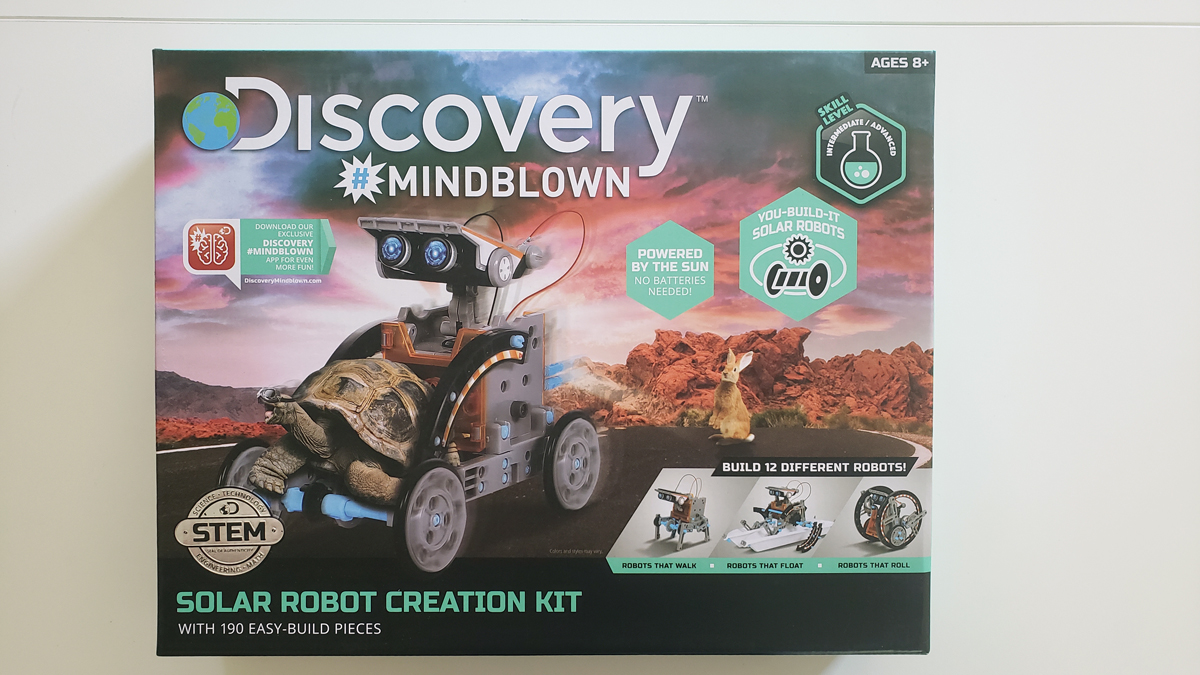 A, our fourth grader, has gained a steady love of STEM-related toys over the past year. He is particularly fond of anything where he gets to build something with movable parts like vehicles and catapults. Given his interests, I was excited to get my hands on a copy of the #Mindblown Solar Robot Creation Kit from Discovery Kids for reviewing.

What Is The #Mindblown Solar Robot Creation Kit?

The Solar Robot Creation Kit is a STEM building set from Discovery that lets kids create 12 different solar powered robots including walking robots, floating robots, and rolling robots. It’s aimed at kids ages 8+ and described as being an an Intermediate/Advanced level. It has a MSRP of $19.97.

What Comes In The #Mindblown Solar Robot Creation Kit?

Overall, it seems like a pretty decent set for something that retails for about $20. There’s a huge variety of small plastic pieces and the plastic bags and stickers that come with the kit are designed to help you sort and keep track of them all (please do this, it’s a huge help).  There’s also some decorative stickers for the creations and a file for smoothing any remnants still stuck to the building pieces after they are punched out. The pieces seem sturdy enough for their purposes and should hold up decently. The solar cell is a neat little addition as compared to a lot of sets that require batteries that I’m used to coming across and a really nice change up. With this variety in pieces, I’m curious if older kids might be able to create their own unique creations. The instruction booklet is fairly typical, but it might be worth noting that unlike other building sets, there’s no use of color or anything to help identify which pieces are being used in which steps, a change that would be helpful.

The first thing we ended up doing was punching out all of the tiny pieces. Again, use the bags and sticker labels that are included. We failed to do that at first and had to go back and re-sort pieces later. Younger kids need to especially pay attention to some of the subtle differences in the pieces so that they don’t try to use the wrong ones.

A wanted to jump right into building and we almost had a few complications. Make sure to read the instruction book from the beginning. Things like the little housing unit for the solar cell need to be put together first and the robot directions will assume those pieces are a built unit. This is one of those areas where again, a younger kid who’s a bit to excited to jump in may find themselves confused. We found that the best way to build the solar unit was to do a few steps and hold it up to a sunny window to test it and make certain things were moving correctly before doing a few more steps.

One of A’s picks ended up being the little Roly-Poly Bot. Once we had the solar cell as a built unit, he was able to do a fair amount on his own. However, some of the pieces with a tighter fit did require some help. My husband tagged in to help with those parts making it a nice activity for the two of them to do together. Once the pieces were together, A was thrilled at seeing his creation move and ran to the backyard to check it out a bit more.

Overall, I think it’s a pretty decent set with lots of variety for the price range. I do think the age recommendation/skill level might throw a few people. A is close to ten and has built a lot of other STEM sets, but certainly needed more help with this one so I agree with the Intermediate/Advanced skill level, but I’m not sure I know many eight-year-olds who would have had an easier time with some of the pieces than he did. I would say an older kid can build more independently. However for younger kids as an activity to do with a parent to help explore STEM, we thought it was pretty fun and there was certainly a sense of satisfaction in seeing the finished product actually move. Independently, I think younger kids are more prone to skipping steps in the instruction booklet or not correctly differentiating the parts and getting frustrated. I certainly would not grab the kit for kids younger than eight years old.

The variety of pieces and quality are extremely fair for the price range and again, I would be curious to see how older kids might try to use those pieces to create their own design. With the variety of different projects included, kids definitely get a wide exposure to how different parts interact with each other to make something move.  I can certainly see this getting added to at-home activities for kids who need a break from screen time but still crave something interactive.

Where Can I Buy The #Mindblown Solar Robot Creation Kit?

The #Mindblown Solar Robot Creation Kit can be purchased for $18.69 from Amazon.