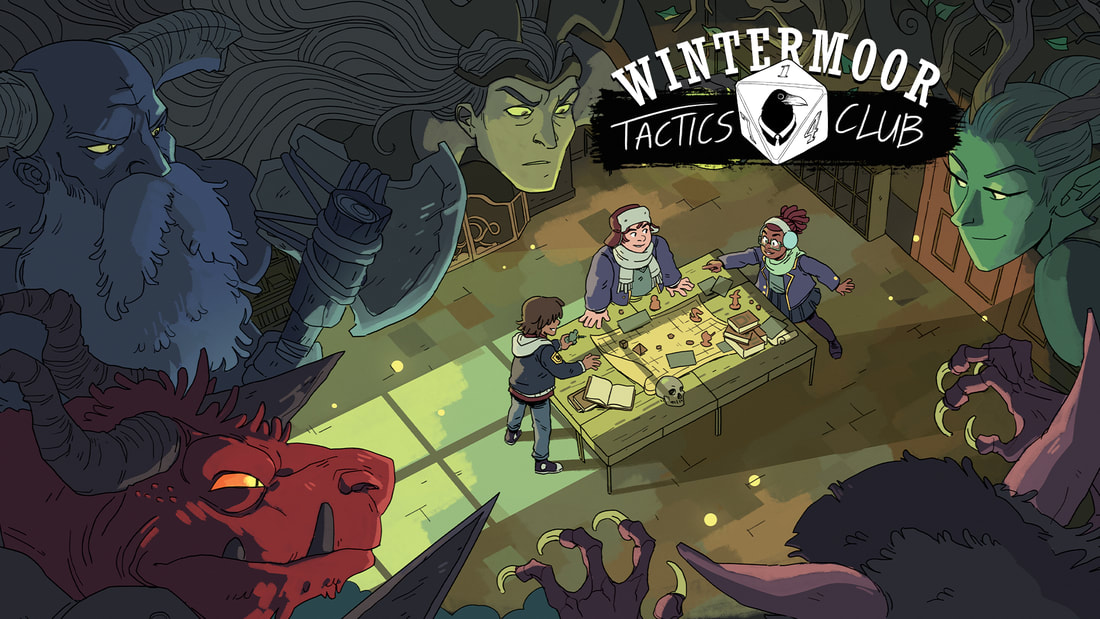 Role-playing games are built on imagination and tactics, two skills often underrated in the real world. That’s the key attraction to Wintermoor Tactics Club, a new game available on Switch, Xbox, and PS4. It is two games in one: the novel visual game set in a North America boarding school, and the in-game fantasy role-playing filled with magic and mayhem. While the characters learn how to use their RPG skills in their ‘real-life’ snowball war, players can also learn how tactical skills in RPG can apply in our own real-life situations. It’s a win-win scenario for everyone.

What Is Wintermoor Tactics Club?

New game alert: this one has just arrived on Switch, Xbox, and PS4 (with some earlier airtime on Steam). It’s a single-player game incorporating both visual novel and tactical RPG board format. It has been a load of fun playing this game, both by myself and with the spawnlings. For some ‘behind the scenes’ input, I chatted with Jackie Kreitzberg (producer for Wintermoor Tactics Club).

The story places you in the role of Alicia, a young student at Wintermoor Academy. It is Winter sometime in the mid-1980s, and the school is filled with various social clubs: Equestrian Club, Monarchist Club, and Alicia’s personal favorite–the Wintermoor Tactics Club. It is the perfect place for Alicia and her friends to play out some old school RPG Tabletop, filled with fantasy and strategic planning. Unfortunately, Alicia’s haven is under threat; so too are ALL the social clubs. The school principal has enforced a compulsory snowball war for all social clubs. The winner is crowned Ultimate Club; however, all other groups will be disbanded. Here comes the perfect opportunity to use those RPG tactics to save their club, while learning how to use other RPG skills in surviving High School life in general.

Placing the storyline in the mid-1980s is a brilliant strategy for this game. Generation X are major players in the rebirth of D&D and all-round geek-nostalgia right now. And yes, many of us would have been ‘school-age’ for the mid-1980s. However, there is a universal nature in the approach with the game, building a nice generational bridge to share our geeky interests with our own kids. Wintermoor is definitely a better choice and presentation of my geeky-’80s, making for a less awkward ‘flashback’ with my kids.

Jackie: “We wanted to deconstruct some fo the central themes of underdog comedies and sports movies from the 1980s; when ‘nerds’ have to fight against ‘jocks’. It’s an era when this dynamic really feels natural, where you could plausibly say that a few kids playing a tabletop RPG would be seen as hopeless nerds and really looked down on. These days D&D and other TT games are so popular, it would be hard for such a club to have the same underdog status. Back then, games like D&D were in their infancy and still under a lot of suspicion and scrutiny from the mainstream.”

Gameplay: A Game Within a Game

What really brings this game together is the incorporation of an RPG Tabletop within the visual novel gameplay. The primary game of Wintermoor Tactics Club is the story behind the Snowball War of Wintermoor. Throughout the story, Alicia has the freedom to move around various locations, interacting with many students and their side quests. What I loved about this was how the exploration ties back to the Tactics Club and character development.

The second part of the game is combative in the form of tabletop tactical RPG. Small fields with squared-off grids, turn-based moves, and strategic attacks are all there. Training starts in the ‘Curses & Catacombs’ (C&C) campaigns with the Tactics Club. They are set like styled mini-games which then transfer the same skills to the ‘real-life’ snowball battles. As each school club is defeated, new members are brought into the Tactics Club with subsequent new characters in the fantasy campaigns.

So what came first: The Storytelling or the tactical gameplay?

Jackie: “The initial inspiration was the snowball fight tutorial from Final Fantasy Tactics Advance. The game’s director and initial concept artist drew up some ideas for ‘a bunch of boarding school kids that play a tactics game and get caught up in some kind of mysterious snowball tournament.’ … We played with the idea of a typical ‘nerds vs. cool kids’ plot at first but the more we thought about it, the more we realized that an arc about fixing everything by defeating evil “cool” characters wasn’t very healthy or realistic–especially since those narratives can justify gatekeeping and ‘us vs. them’ mentality for the many sorts of people who consider themselves to be underdogs. So instead, we tried to tell a less conventional story about trying to fit in and bring people together. Alicia feels isolated by her status as a Black female nerd at a traditionally pretty white elitists boarding school. How can she overcome those problems of gatekeeping and feelings of isolation?

“Alicia uses empathy to reach out to others and gather together a group that can help combat these feelings. With this in mind, that tactical gameplay really fell into place. Since this is a game about reaching out to new people who have never tried tactics before, we wanted to do the same thing for our players: make a game that felt cozy and accessible. We wanted people to be able to feel the same way about the game that Alicia feels about C&C something cozy, welcoming, and familiar that they can come back to.”

How to Play Wintermoor Tactics Club

Given the storyline of Wintermoor is very introductory and inclusive, it is comforting to see the same approach taken with the game itself. The first Act is akin to a basic introduction or ‘warm-up’ to the game. Characters are introduced and maps are laid out. The Player’s first experience with the C&C table is delivered with guidance and pace, explaining each of the elements and goals for gameplay. As the general game progresses, so too does the RPG game. You can build on each character’s skill base from campaign quests and additional battles. Each character has their own equipment and skills, gaining ranks and additional abilities too.

The only downside I found with the game was the physical play using the Switch joy-control within the C&C campaigns. Using the stick to move between squares on the grid was highly sensitive and slightly frustrating. I was called upon a few times to help 7-year-old Zaltu with her movements but to be honest, I was not much better myself. Without a professional understanding of the coding pitfalls, perhaps it would be better to incorporate the touchscreen abilities with the Switch and simply touch the square you want to move to. I have not played this game on any other device so this may simply be a Switch issue.

Another feature I feel would enhance the game would be the inclusion of two-player, either co-operative or competitive. Currently, Wintermoor is a single-player game, with no plans for sequels or DLC or additional features in the future. However, I know a lot of families and friends will gain plenty of enjoyment in sharing with the game-time, supporting whoever is the primary player at the time. It is definitely the type of game to foster supportive strategy planning and discussion during play.

My favorite element of Wintermoor is the character list. Alicia is the main protagonist and the only character playable in the game. Yet the game is raised up even higher by the amazing diversity across all non-playable characters (NPC). They felt so real and varied, I had to ask if they were based on any of the development team.

Jackie: “Absolutely! Everyone on the team put a little of themselves into Wintermoor. Many of the quirks on campus are the two writers gently poking fun at their undergraduate alma mater. And a lot of the books that Alicia is reading (and writing!) are based on favorites and personal works of the writers as well. The cat jokes are a favorite pastime of the director, the shy character of ‘Todd’ was a special request from the producer, and we talked a lot with our nonbinary combat designer about the best ways to present our non-binary character, Avery. There are tons of little touches like these, and more; like any good creative work, we tried to draw from ourselves and our experiences as much as we could.”

For me, the cast of Wintermoor is very realistic and relatable. While it may initially feel like the social clubs are filling the stereotypes, the students themselves are definitely not the usual archetypes you would find in RPG. Instead, it is a diverse mix of people and backstories, which in turn builds a school spirit within their story. As Jackie explained, “Diversity isn’t really a set of boxes to check as you write characters; it’s just the intrinsic sum of the characteristics of any realistic group of people.” 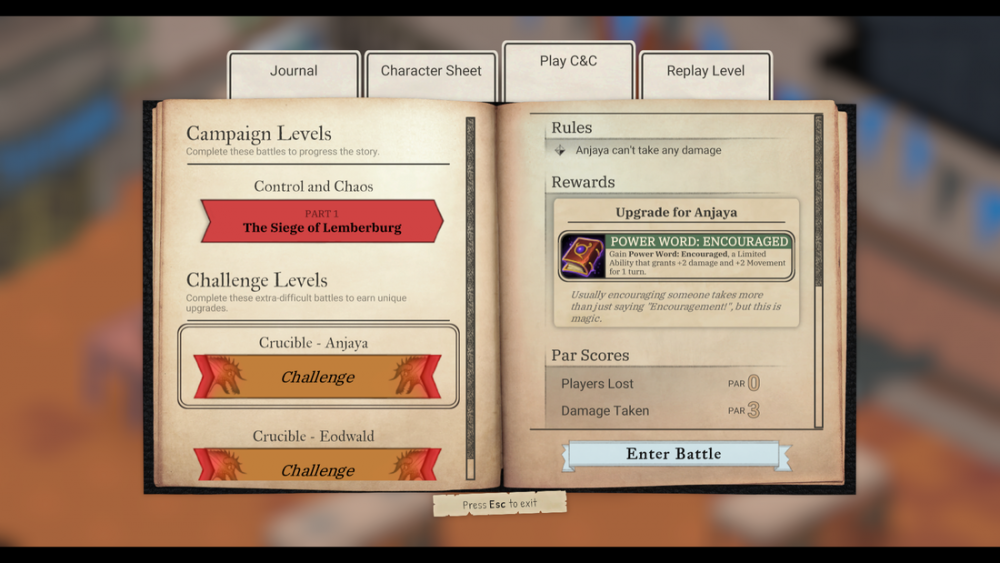 Wintermoor Tactics Club is the perfect escape for gameplay. It’s fun, it’s entertaining, and it comes with no pressure at all. It probably won’t appeal to the hardcore RPG players looking for high stakes/high rewards but it is the nice warm hug for those who are new or hesitant to jump in. While the younger players may need a little help every now and then, older siblings will probably enjoy the opportunity to share the RPG world with them. The comic-book style graphics are enjoyable and the soundtrack fits neatly with the gameplay; nothing outstanding or offputting here at all.  Definitely a game I can enjoy rugging up with on the couch.

This review is based on a free copy I received from the publisher. All views are my own.