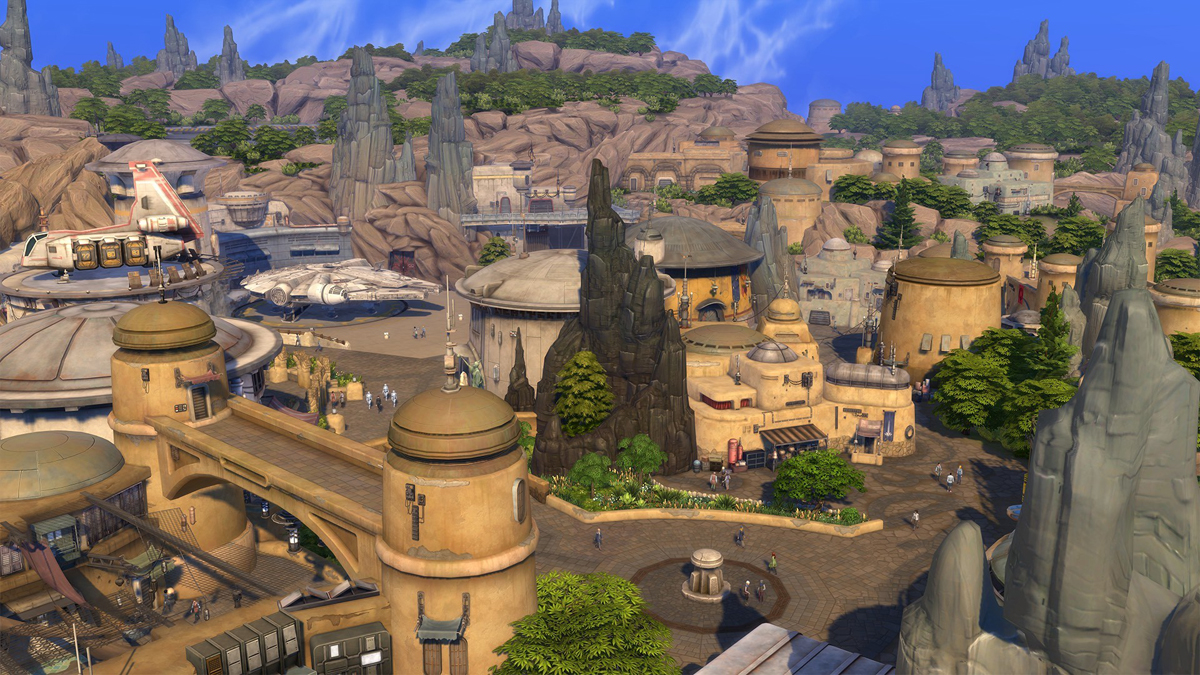 What is the Sims 4 Star Wars: Journey to Batuu?

The Sims 4 Star Wars: Journey to Batuu is a game pack for the Sims 4 Base Game. A popular life simulation game, The Sims franchise allows players to play the life of people known as “Sims.” A Sims game pack is a half-size expansion pack. It brings new content to the game, but not as much as a full expansion would. In this newest game pack, Sims can explore Batuu from Galaxy’s Edge at Disneyland and Disney World with new clothing, build objects, and a new vacation spot of Batuu. On Batuu, Sims can buy custom droids, lightsabers, and take part in missions for the Smugglers, the First Order, or the Resistance.

What is The Sims 4 Star Wars: Journey to Batuu Rated?

The Sims 4 Star Wars: Journey to Batuu is rated T by ERSB for Crude Humor, Sexual Themes, and Violence.  You can see the GeekDad break down of the reasons for this rating in this article about the base game. Teen Sims can “mess around,” adult Sims can “woohoo” or “try for baby,” but none of these acts are shown explicitly and occur behind other objects. When Sims are unclothed (such as in a shower) they are blurred. Some clothing items are more revealing than others. Sims can die in a variety of ways other than old age and can get into very cartoonish “fights” with other Sims. These types of actions carry over into this newest game pack as well. The rating is just about right, although pre-teen players who simply want to run missions for different factions and not romance other Sims can probably avoid a lot of the more T-rated aspects of the game.

Can I Watch the Trailer for The Sims 4 Star Wars: Journey to Batuu?

This Game Pack has been a little controversial with the fan base since it was announced. I’m hesitant about bringing such blatantly licensed lines this prominently into the game, but an open sandbox way to play Star Wars felt intriguing. I decided to give it a chance, but created my own game rather than try to mesh it with my preexisting one. Since this new addition doesn’t include any new households or full neighborhoods (Batuu is a vacation spot really), I played with some of the new hairstyles and outfits in Create-a-Sim to make a new Sim to use for this adventure. I picked a new Aspiration connected to this pack so that I had a nice guide to navigate the new features.

There’s some fun new choices as well as some options you have to earn reputation to unlock. The first thing I noticed was that there aren’t clothing options for all of the categories, which did disappoint me a little. I noticed the same with the build items. Lots of cool new stuff, but little things like the lack of a bed made it feel like I couldn’t really recreate Star Wars in the game.

Batuu is available by taking a vacation, so I made the call and quickly sent my new Sim off to Batuu for some new adventures.

Once I arrived on Batuu, I was given some simple goals like ordering food or freshening up in a little house. Unfortunately, I quickly learned that most of the buildings are rabbit hole styles and while the scenery is lovely, I wanted more lots to really explore.

Oga’s Cantina is a fun spot though. You can meet new Sims of various factions, order fun themed drinks, play a game of sabacc to earn some credits, or pick up Scoundrel related missions.

Shortly after arriving, you may wish to pick a faction to join. I picked the Resistance, and found myself being given different missions to unlock new ranks. They included things like slicing First Order systems, gathering intel, and even making some runs in an X-Wing. The missions are pretty fun, and I know my nine-year-old would really enjoy getting to play them too. Head’s up that while you can do missions for the Scoundrels and another Faction, you can’t do Resistance missions without negatively impacting your reputation with the First Order and vice versa.

Later on, I even went off to buy my own little droid. I’m trying to save up enough credits for a lightsaber too.

Overall, my feelings on this Game Pack have been a little mixed. Batuu is pretty neat, and the missions are fun, but I really don’t like how many buildings are rabbit hole based. Simple things like finding a bathroom in the Resistance camp is suddenly a challenge and that seems frustrating.  While there’s a similar amount of clothing and items compared to other Game Packs, they are Star Wars-themed so they don’t always mesh well with the existing stuff, and there’s not enough to really make your own Star Wars world. It’s a odd balance. If you’re going to have a Star Wars game for The Sims, I feel that you really want to be able to play Star Wars. This would almost be better as a separate Sims game where expansions could add additional Star Wars content so that you can truly play a open sandbox game. Instead you get an addition that feels like it doesn’t quite mesh as well with the rest of The Sims, but doesn’t quite fully let you play Star Wars either. That being said, I think the pre-teen crowd like our nine-year-old, A, might enjoy this an a simpler introduction to the franchise. I’d probably recommend waiting for a sale to pick it up rather than paying full price for it because it does add some fun things, but I don’t feel it’s as strong as other Game Packs in the past have been.

What Formats is The Sims 4 Star Wars: Journey to Batuu Available In?

Currently, The Sims 4 Star Wars: Journey to Batuu is available on PC/Mac, but often expansions release on Xbox One and Playstation 4 at a later date.

*The Sims 4 Star Wars: Journey to Batuu is a game pack, so players must have The Sims 4 Base Game to play.

Where Can I Buy The Sims 4 Star Wars: Journey to Batuu?

The Sims 4 Star Wars: Journey to Batuu can be purchased as a digital download via the Origin store for $19.99.

1 thought on “Is the Force with ‘The Sims 4 Star Wars: Journey to Batuu?’”