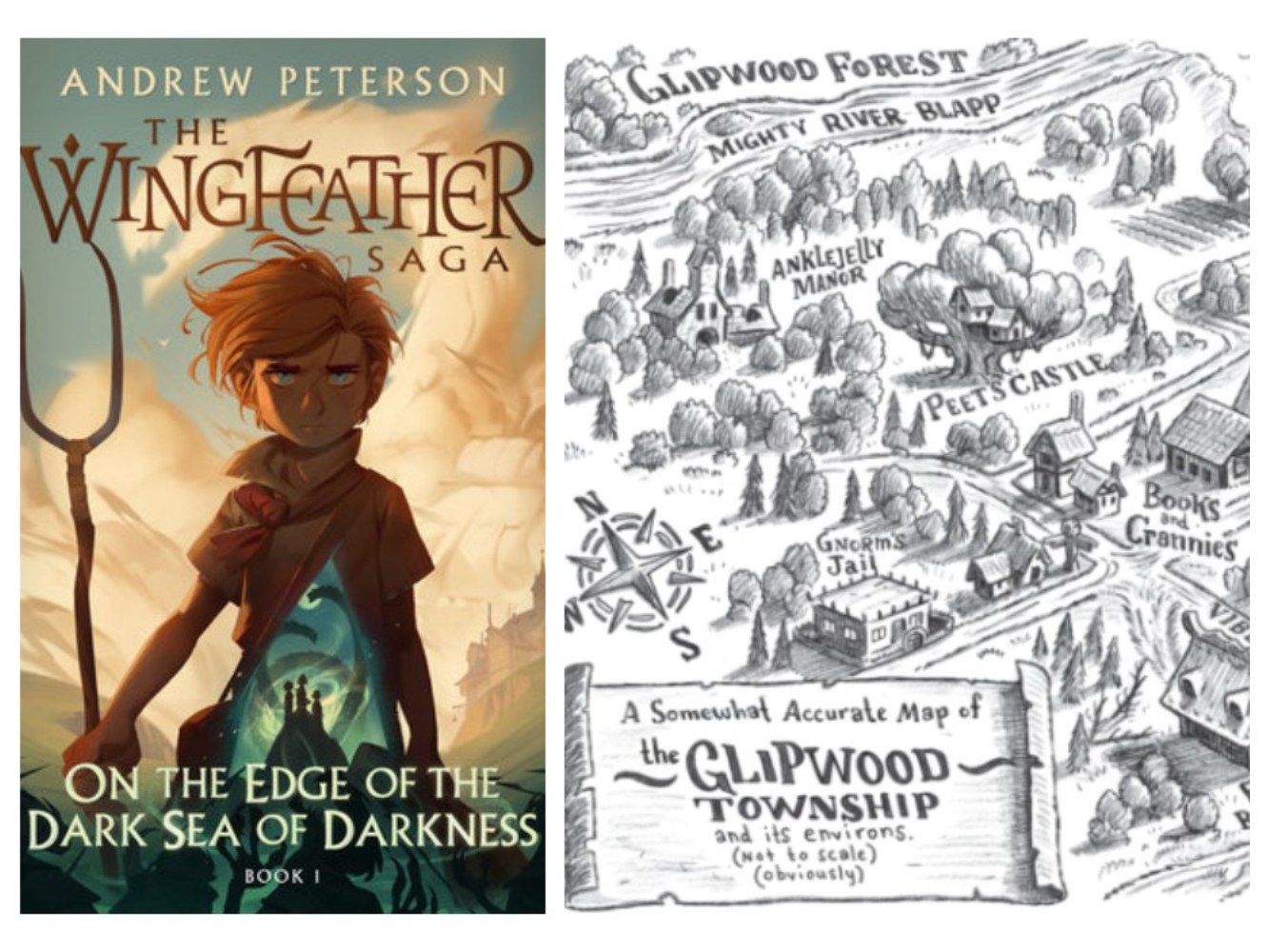 World building is my jam. Give me a parallel universe, a multiverse, a fairy tale spin off world, a Time Lord planet, there’s just something about diving into a whole new place. Somewhere with new geographical boundaries, new animals, new types of “people.” The work that goes into creating such a thing is impressive, immersive, and just downright delicious to read. This year sees the re-release of a series I had never heard of before, The Wingfeather Saga by Andrew Peterson. The first two of four books are currently available, with the final two to follow later this year. Think Narnia meets Middle Earth, with a splash of Rainbow Brite and the Star Stealer thrown in. How could I resist? 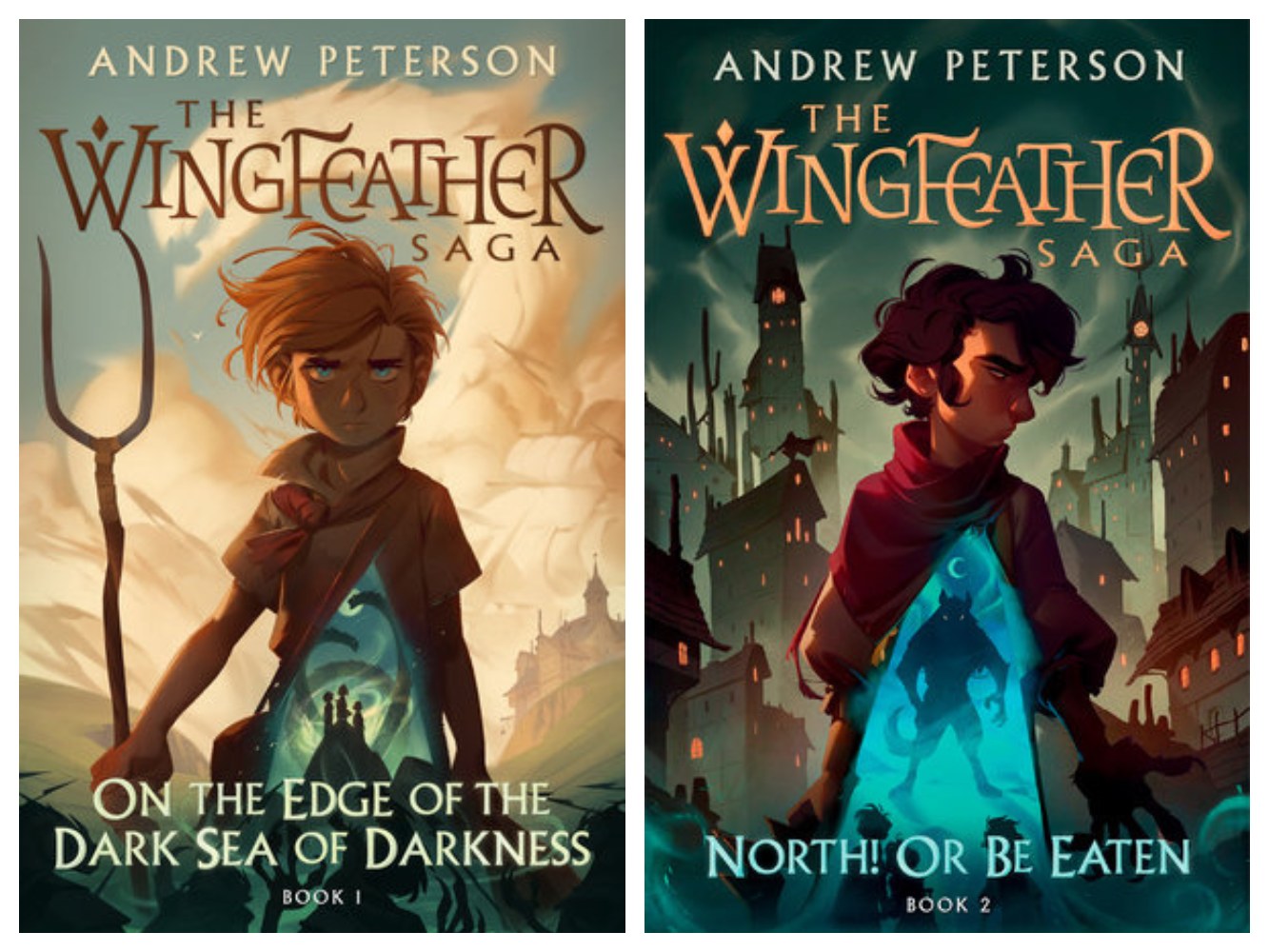 In the first installment, On the Edge of the Dark Sea of Darkness, we are introduced to the mythology of the world of Aerwiar, a short history of the land of Skree, and the Igiby family. Ravaged by Gnag the nameless and his army of Fangs, the people of Skree live not in servitude, but under occupation. A tentative peace exists in the minds of the children, though not in the adults who can remember the time before. The story focuses on the three Igiby children, who live on the edge of town with their mother and grandfather, who we are told, was a Pirate in a previous life. Janner the eldest boy, Tink his younger brother, and Leeli their sister, who along with her dog Nugget are the main focus of the story. Janner yearns for more physical freedom, but gets more responsibility. Tink yearns for safety and adventure in equal parts. Leeli yearns for a more existential freedom, and will fight anyone who denies her, or defies her for that matter. They are being taught by their mother in an unusual manner under a system she calls T.H.A.G.S which means Three Honored and Great Subjects: Word, Form and Song. Janner studies writing and poetry, Tink studies art, through practical painting and drawing, mostly, Leeli learns music. In Tink’s words “not one other child in Glipwood was forced to spend hours upon hours drawing the same tree over and over from different angles.” Having just gone through several months of virtual school, and facing several more, reading about this was particularly interesting. This unique education is not the only thing that sets them apart from the other residents of Glipwood, and as we come to know and adventure with our protagonists more and more, we become aware that there is a lot more going on here than would appear at first blush. 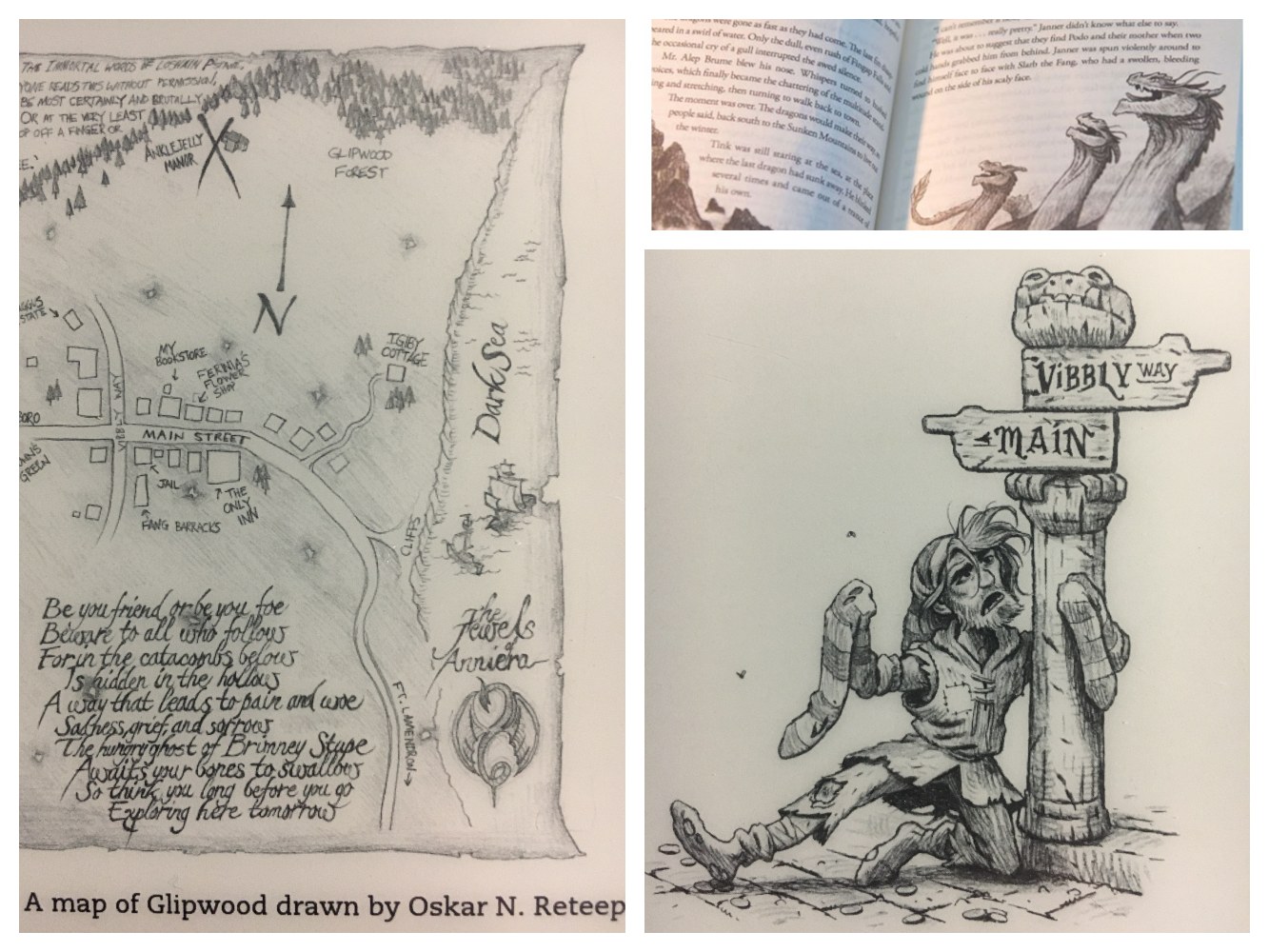 While we are given some information on the danger around them in the form of a brief history. The terror of living in a captive land is made real to us in the first chapter where we are introduced to “the carriage black”. This is what I imagine the child catcher’s carriage from Chitty Chitty Bang Bang would be like if it were used in a series of American Horror Story. This is no Voldemort bad guy, but neither is it a Sauron. There is something familiar about Gnag the nameless, that distant horror you feel may snatch you up at any moment, but something new and different that draws you in with fear and trepidation. Or if you are Tink, draws you in to go places you shouldn’t, pursue things you shouldn’t, and otherwise get into trouble.

Janner may resent the responsibility pushed upon him by his grandfather, but as his sister and brother begin to get into more and more trouble, he grows, and you realize that he is a protector of sorts, a role that he seems to resent but also is starting to blossom in. The three children develop so much during this first story, yet remain children, which is something that can often be a failing in child-as-hero books. Peterson lends a sense of realism to their childhood, whilst also instilling the fantastical, and the heroic in our young heroes. 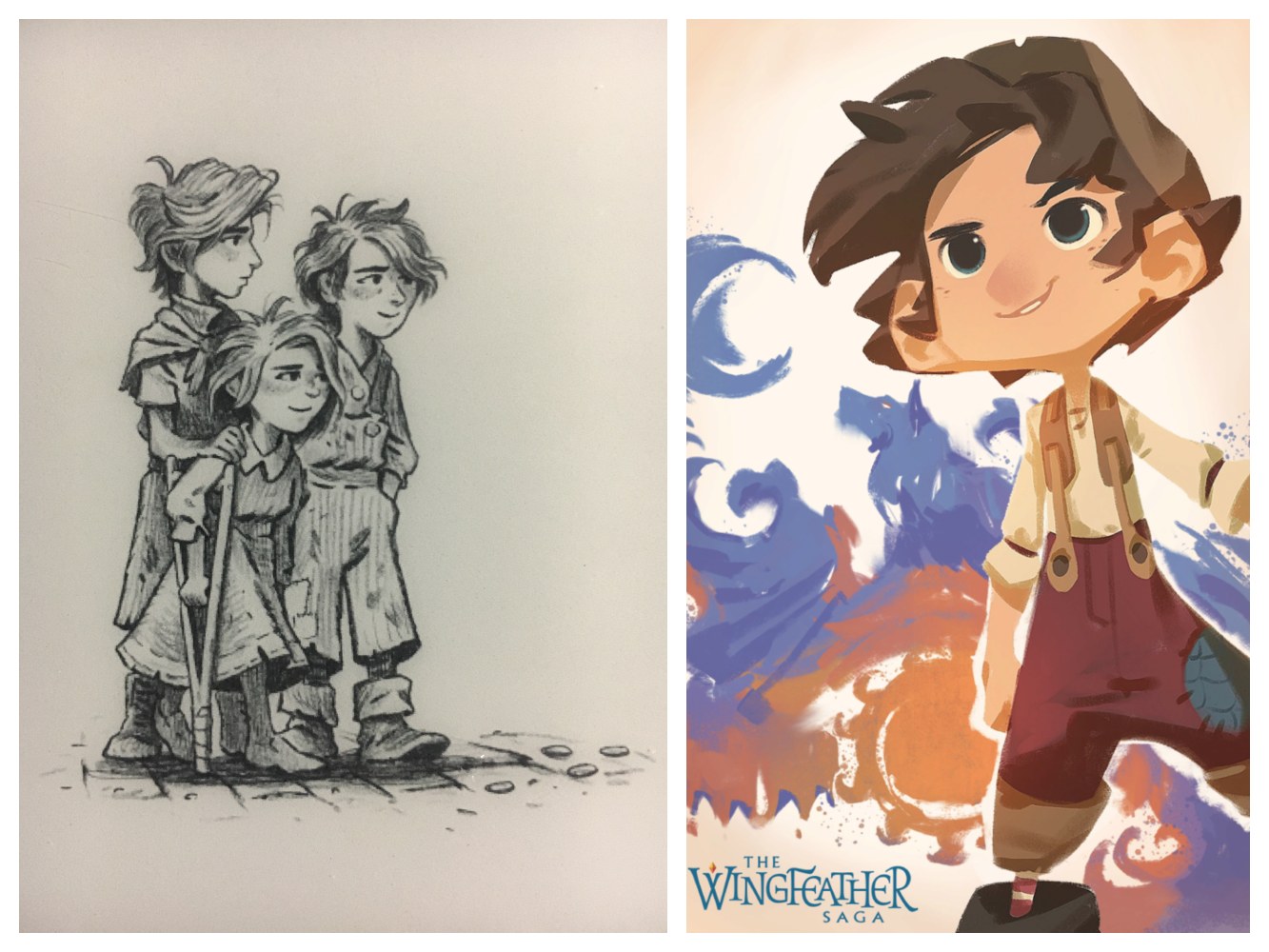 The children have been raised in the small town of Glipwood, with no link to the wider world around them. But events conspire to entangle them firmly in the clutches of Gnag the nameless and the machinations of his hordes. With every decision they make, they are drawn further from home, and closer to something that seems to ever elude them. As Gnag the nameless pursues that which he has longed for, the Igiby family becomes inextricably linked with the pursuit. No spoilers here, the book ends with both dark foreboding, and hope for the future. I have high hopes for the remaining three volumes of TThe Wingfeather Saga.

Structurally the book just tickles my fancy. Before we even get into chapter 1, we have three short humorous but expositional preludes, and are given our introduction to the style of humor we should expect of Peterson.

“The Fangs walked about like humans, and in fact they looked exactly like humans, except for the greenish scales that covered their bodies and the lizard-like snout and the two long, venomous fangs that jutted downward from their snarling mouths. Also, they had tails.”

In style and sentence structure the book is greatly reminiscent of Jonathan Strange and Mr Norrell. Situations and history are treated as fact even as we encounter them for the first time, and footnotes are delightfully used as both funny distractions, and as a means to aid the story. In what is certainly an homage to Tolkien and The Lord of the Rings Peterson inserts song and poems of the world of Aerwiar to deepen our affinity for the world, and help with some exposition. Peterson is also one of the founders of the creativity hub The Rabbit Room in Nashville, where they recently installed the fireplace from Tolkien’s former home in Oxford into their meeting place, so the link is not just imagined on my part. You will find “The Legend of the Sunken Mountains” a traditional tale from “Fletcher’s Comprehensive History of Sad, Sad Songs” in the appendices of On the Edge of the Dark Sea of Darkness. The chapter titles are likewise full of wit and whimsy. Who can fail to enjoy something entitled “Not the same as Ships and Sharks” or “Cave Blats and Quill Diggles.” 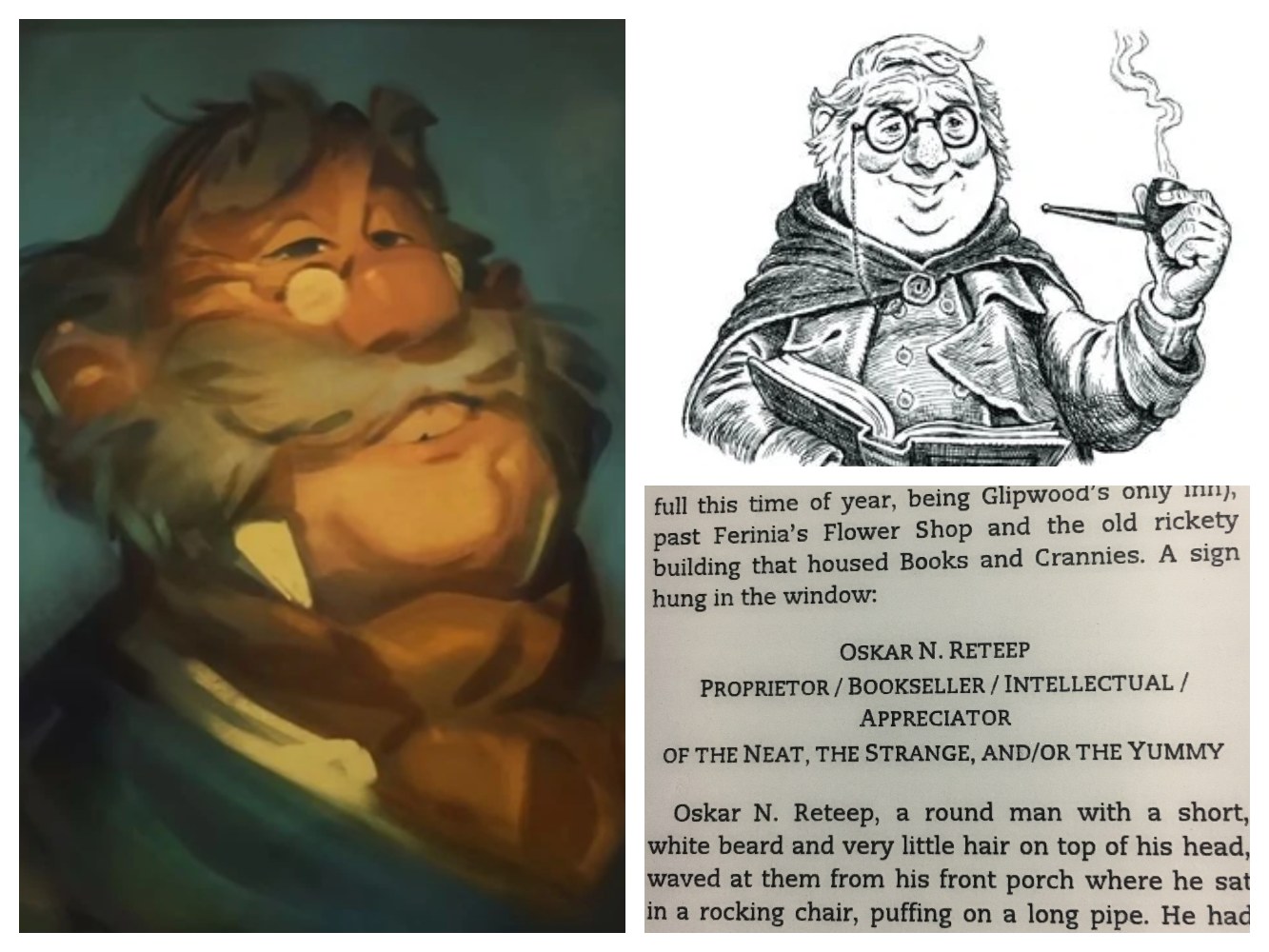 One of my favorite characters is not in much of the book, though his presence is keenly felt in many scenes when he is present, and when he is not. The proprietor of “Books and Crannies,” the lone bookshop in the town of Glipwood, is a man after my own heart. While devastation reigns across the land, Oskar N Reteep seeks out tome and text, to preserve the literature and histories of a fallen people. He will beg, borrow, and barter to acquire books that are no longer of any use to people whose homes were destroyed. Oskar knows that the words within are worth far more to the land of his forebears, then any measurement in food or shelter could buy. His life’s work is to preserve and protect the written treasures of his land. He is also a man full of the most ridiculous quotes, from the most ridiculous books, and I couldn’t love them more.

“We took a wrong turn at SKREEAN HISTORY,” Janner said, “and then another at POINTLESS POEMS and-”
“No matter,” he (Oskar) said with a wave of his hand. “I believe it was the great Chorton who wrote, ‘To worry over dallying brothers is not worth the trouble when a large shipment [of books] has just arrived.’ Or something to that effect.”

You are left wondering if he is changing the quote to suit the occasion, making it all up, or quoting Chorton verbatim, and quite frankly, any of those scenarios is delightfully acceptable to me.

The book does fall down in the representation of female characters. There are only two of any import, with the other key figures all being men or boys, or lizard men, which count. It would have been nice to have maybe two sisters and one brother, or maybe Olivia N Reteep in charge of the bookstore. But this is the first of four books, so I’ll reserve judgement for future secondary characters to develop. The manner in which Mrs Igiby handles herself throughout the story, is setting her up to easily be one of my favorite characters in young adult fiction. She is part Eliza Bennett, part Arwen, and part Susan Pevensie, and I cannot wait to see what happens to her. 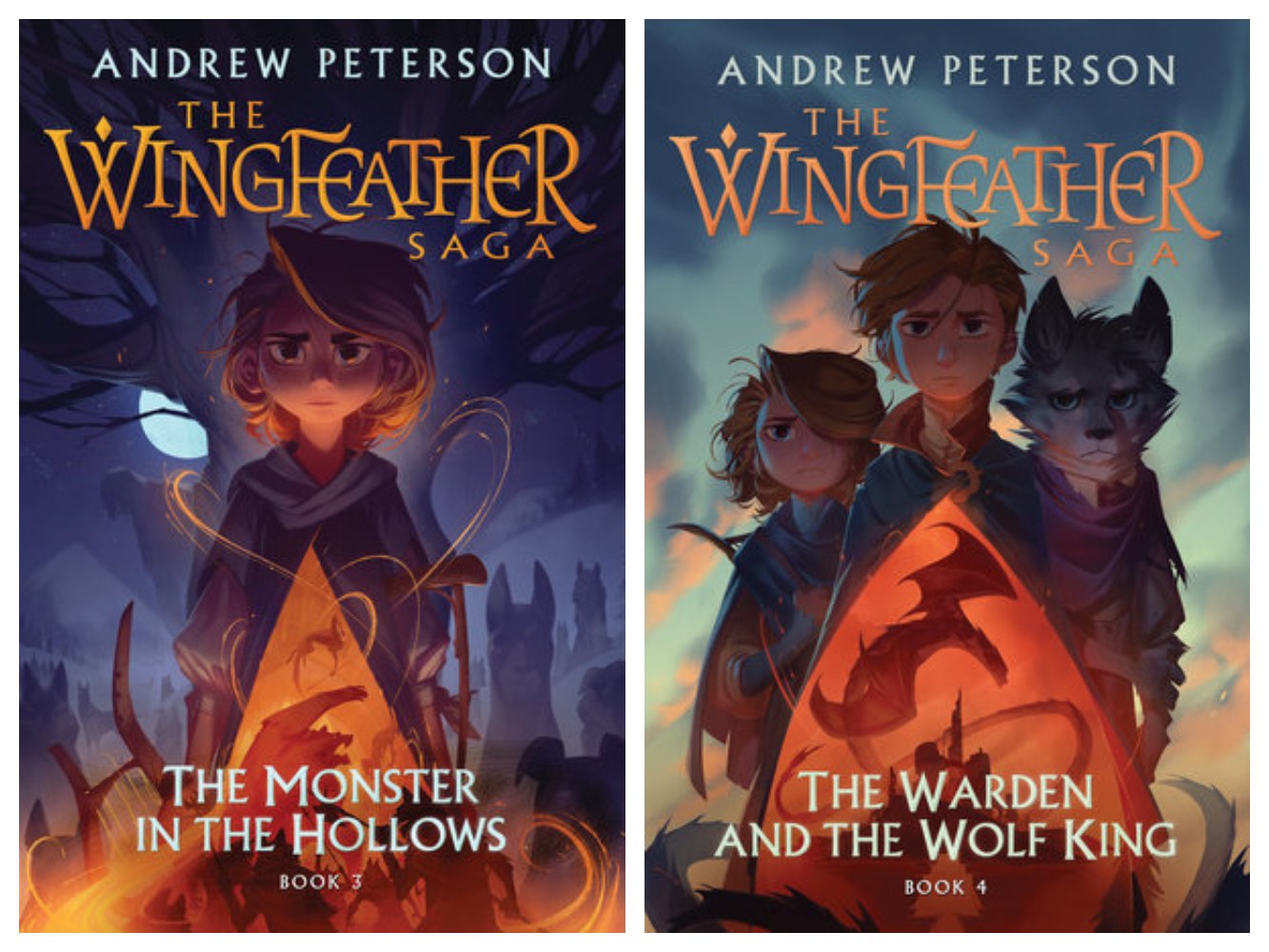 The Wingfeather Saga has been around for well over a decade, but new life was instilled in 2017 when a Kickstarter to fund an animated series was fully funded and a 15 minute short film released at Christmas of that year. The story is currently being developed for distribution as five feature films by Shining Isle Productions, which is a team composed of the author, Andrew Peterson, Tom Owens (head of story for How to Train Your Dragon 2), Keith Lango (Valve Corp), Nicholas Kole (Disney, Hasbro) and J. Chris Wall (VeggieTales). For 2020 the saga is being re-released by WaterBrook & Multnomah an imprint of Penguin Random House. The new editions feature new cover art by Nicholas Kole and are illustrated by Joe Sutphin. The first two books were released on March 10, 2020. The final two are set to be released this coming September. The companion book Pembrick’s Creaturepedia will follow sometime in 2021. The books can be purchased from Amazon or directly from The Rabbit Room for just $10 each, with the option of a whole host of goodies to go along with the books. The Wingfeather Saga website is a cornucopia of information, activities, and special features. If you become an Igiby addict, there is plenty around for you to do a deep dive. I don’t feel like I’m coming late to the game with this book, I just feel sheer excitement at what is already at my fingertips.

My eight year old came upon me reading this book and I promised him that I would read it to them next. Reading a book together is on our summer bucket list, and I cannot wait to introduce my kids to the Igiby children, Oskar N Reteep, and the town of Glipwood in the land of Skree.

GeekMom received a digital copy of this book for review.

Pokémon: Should You Catch The Call Of Legends?