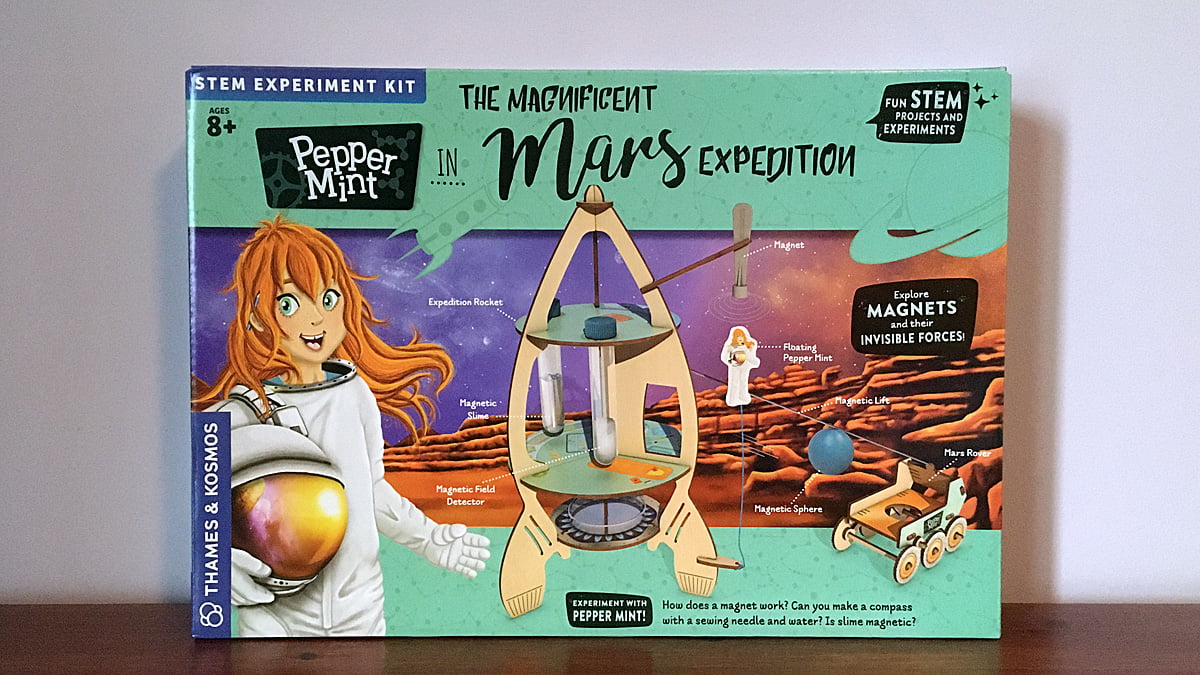 Throughout July, GeekMom is preparing for the planned launch of the Perseverance rover on July 20th with Mars Month, a month filled with Mars-themed content. Be sure to follow the Mars Month tag to find all of this month’s content so far in one place. Today I am reviewing Pepper Mint in The Magnificent Mars Expedition – a science experiment kit with a Mars theme.

What is Pepper Mint in The Magnificent Mars Expedition?

The Magnificent Mars Expedition is one of a range of STEM kits from Thames and Kosmos that center around an eleven-year-old girl named Pepper Mint. The kits include a story that links to a variety of experiments and activities you can do at home using the items included in the kit. These activities are designed for children aged eight and up but many will require adult supervision for many of the activities.

You will also need some basic additional items to work through your experiments, these include scissors, a ruler, sticky tape, craft glue, a kitchen knife, weighing scales, and access to tap water.

I was pleasantly surprised by how little plastic was included in this kit. While there was certainly some of it, many of the components were made from wood, cardboard, metal and other recyclable materials. Most of the plastics included were part of items that are designed to be kept long-term rather than single-use items or packaging. As for the packaging, the box was larger than it needed to be with some wasted space which could be reduced to help the product be a little more environmentally friendly.

The Experiment Manual is at the heart of the Magnificent Mars Expedition kit. Rather than a standard science kit that simply contains experiments to complete in any order, the manual guides your children through a story, pausing to allow you to conduct your experiments along the way.

The Magnificent Mars Expedition opens with Pepper out delivering sandwiches. She has decided to begin delivering the food orders in order to save enough money to buy herself a new cordless screwdriver. Out at the edge of town, Pepper finds herself delivering to a compound filled with buildings. After misremembering her directions from the gate guard, Pepper finds herself in a large chamber where her pants button is yanked straight off her clothes.

After breaking for your first activity, the story continues as Pepper discovers she is responsible for destroying days worth of work about artificial magnetic fields being conducted by a group of scientists for a future mission to Mars. By the next day, Pepper has made herself part of the team, discovered their mission will launch in just a few days’ time, and accidentally blasted off to Mars after sneaking aboard the rocket for a quick look around. Of course, all is never quite as it seems…

This was a short but fun story that helped draw together all the various activities included in the kit and make them feel part of a cohesive narrative rather than just another science kit.

There are seven activities and experiments to work through in The Magnificent Mars Expedition. These range from constructing a rocket from pre-cut wooden pieces, assembling a magnetic navigator, building and controlling a Mars rover, and making your own magnetic slime. As you may be able to tell, magnetism is the key theme throughout this kit.

We found that we had a very varied success rate with the different activities from some that worked perfectly the first time to others that were a total failure. Some of the best activities in the kit were building the Mars Rocket and Rover, the Magnetic Field Detector, and making our paper Pepper appear weightless. Failures included the Magnetic Slime which never mixed correctly and the Magnetic Elevator which worked partially but could never dock successfully.

I loved putting together our vehicles which look nice enough to keep out on display. The rocket acts as a kind of mission base with spaces cut out to hold the various test tubes and the petri dish you will use throughout the story/mission. This lets you keep everything together and in the end, you will have a little Martian science station of your own.

Throughout the Experiment Manual, there are pages filled with extra facts and information related to your activities, plus bonus details from Pepper herself who explains what’s happening in your experiments in kid-friendly language. These fact pages explain key concepts like Earth’s magnetic field and introduce key figures related to the topic including Valentina Tereshkova and Carl Friedrich Gauss.

The Magnificent Mars Expedition was by far one of the best science kits I have used. The instructions were clear, I didn’t need to run around finding lots of extra supplies, and the story helped us feel that we were working through something defined rather than just messing about aimlessly. I would suggest that you may struggle to work through this kit with multiple kids at once as many things can only be done once so if you have siblings all wanting to join in then multiple kits might be a good idea.

Admittedly, having only seven experiments doesn’t feel like many, certainly compared to other science kits, however, I didn’t feel short-changed here. The quality alone makes this kit feel worth the money (roughly $30) and my ten-year-old son genuinely enjoyed working through the various activities, although he was disappointed that the slime didn’t work out because he had been looking to that one all the way through. Altogether, we probably spent 3-4 hours working through the Experiment Manual over a few days and my son has gone back to some of the items repeatedly since we “finished”.

I would definitely be interested in picking up more Pepper Mint science kits. There are currently four different Pepper Mint kits in the series, the other three being The Great Treehouse Engineering Adventure (looks at pulleys, catapults, and basic electric circuits), The Fantastic Underwater Science Voyage (water power, propellors, and physical properties of water), and The Daring Escape from Hidden Island (solar power and electricity). All of them look like a lot of fun and I hope to see even more added to the range in the future.

This was a great way to spend a few hours getting hands-on with science with my son. The experiments and activities were well-balanced in that we had to concentrate on what we were doing but didn’t really struggle with any of them so there was minimal frustration. If you’re looking for a great science kit to work through with your kids, then I’d highly recommend The Magnificent Mars Expedition.

The BB-8 Toy Coming to a Store Near You Soon!