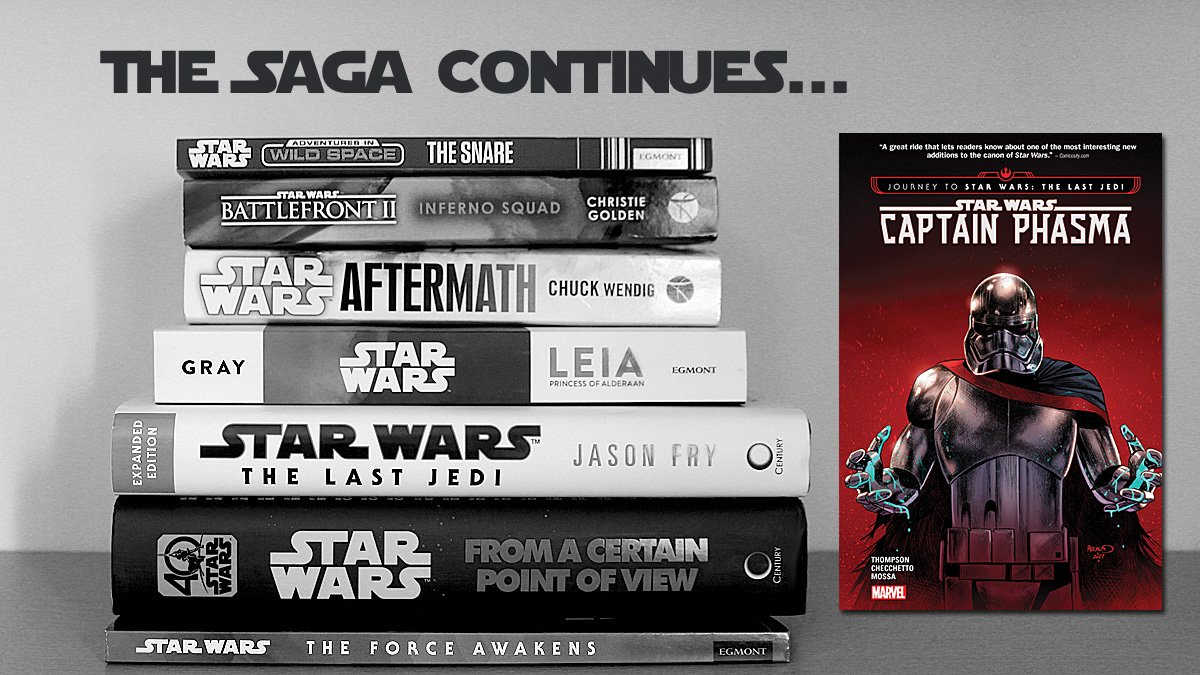 One of my goals in 2020 is to catch up with the Star Wars comic universe because despite reading the majority of new canon novels, the comics have somehow always passed me by. I kicked off this goal by picking up Captain Phasma by Kelly Thompson at my local library for an easy, standalone story.

Part of the Journey to Star Wars: The Last Jedi collection of titles, Captain Phasma follows its title character over the few days immediately following the destruction of Starkiller Base in The Force Awakens. As you may remember, Phasma was left in the base’s trash compactor by Han and Finn after being forced at blaster-point to lower the base’s shields, allowing the Resistance to begin their assault.

During the course of the story, we see how Phasma escapes from Starkiller Base while simultaneously plotting to deflect blame for the lowering of the shields onto another First Order officer. Commandeering a TIE fighter and its pilot, Phasma follows her patsy to the nearby planet of Luprora where she follows her plan to clear her name to its inevitable and inexorable conclusion.

I loved this story, especially its ties back to Delilah S Dawson’s novel Phasma which explored the character’s origins. This is the ruthless Phasma I came to know and respect in that book, the one absolutely determined to survive no matter the cost and whose loyalty is only to herself. The ending is chilling, if not unpredictable, and neatly explains how Phasma is back in a position of authority by the time we briefly meet her in The Last Jedi – something I must admit I was curious about.

This is neat, precise storytelling which leaves no loose ends but which fits perfectly into Phasma’s ongoing story.

The artwork, created by Marco Checchetto and Andres Mossa, suited the story perfectly. The lines are as harsh and unforgiving as the environment being pictured and both reflect Phasma’s personality throughout the story. Blues, blacks, and shades of grey form the majority of the color palette, with splashes of red across the pages such as Phasma’s red cloak and the red viewfinder of a First Order targeting scope. The one exception to this is a brief flashback to Phasma’s pre-First Order life which we view in more gentle, sepia tones.

Phasma remains a woefully underused character, but with stories like this and the Phasma novel fleshing her out, she remains a powerful addition to the Star Wars universe. While it seems likely that Phasma did indeed perish on the Supremacy given that the character did not return for The Rise of Skywalker, if the final installment of the Skywalker Saga taught us anything it’s that any character might be brought back and so I’m still holding out a little hope that we might one day get the onscreen exploration that both Phasma and actress Gwendoline Christie deserve.

For now, Captain Phasma gives her fans another glimpse into the life of one of the galaxy far, far away’s most ruthless characters.