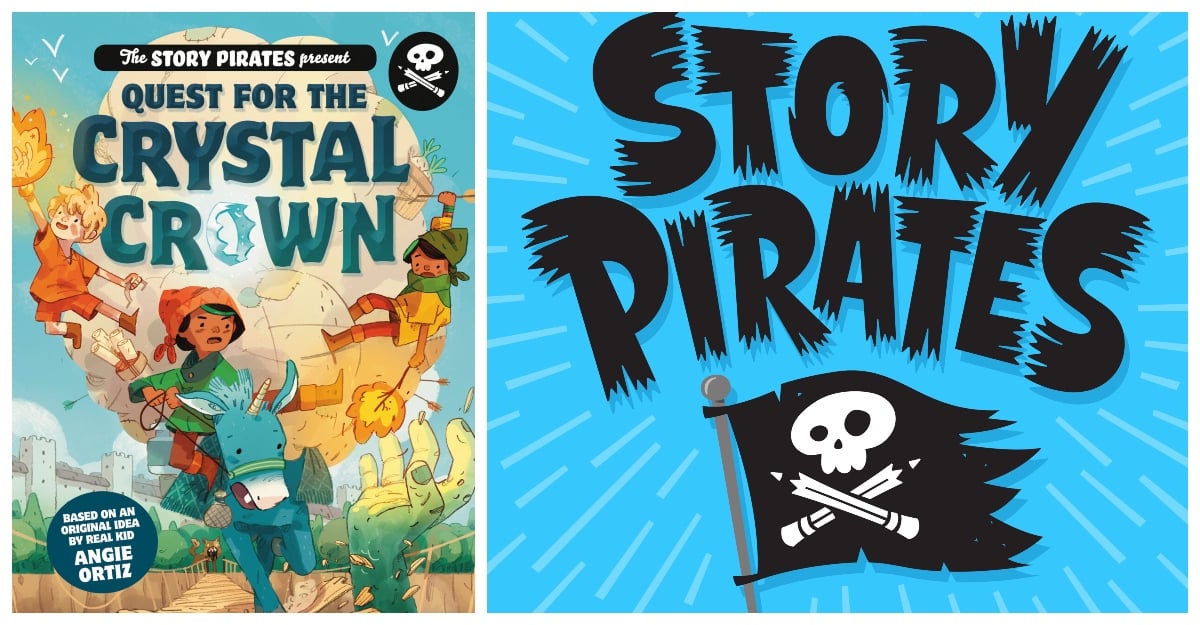 How We Fell in Love With Story Pirates

In the Summer of 2019, back when we were all less than 13 feet apart, we loaded our three children into our truck and drove from Maine to Wisconsin.

We drove to Niagara Falls, then through Canada, and down through Michigan. The kids were three, seven and nine at the time, and all on the same single row in the truck. We didn’t get a peep or complaint out of them until we were just outside of Chicago, almost two days into our drive.

For that, we have The Story Pirates to thank.

Presented by Gimlet Media, the Story Pirates are a group of professional comedians and teachers, who bring to life original writing from kids across the world. Their motto is “Changing kids’ lives, one story at our time.”

Prior to our trip we had loaded an old Iphone with the entire back catalog of the Story Pirates podcast, my husband rigged up partitions between each child, then he hooked up a sound system so that each of them had headphones feeding into the phone. We drove the first ten hours with only the sounds of giggles, and the occasional “gasp,” coming from the back seat. We had brought along our own music to listen to, but found that we liked this far more.

Since 2004, the Story Pirates has been the gift that keeps on giving.

From their beginnings in a classroom in Harlem, they now boast a podcast, a live show if you’re lucky enough to live local, a series of books, and now the Story Pirates Creator Club. But let me back up a second.

This February the Story Pirates released their third full length work of fiction; The Quest For The Crystal Crown. This book is how my ten year old got through the first week of “English class” at pseudo home school; reading the book, reviewing the book, and interviewing Lee Overtree, one of the honest to goodness Story Pirates. My son devoured the book, and was completely star struck when talking to Lee.

Quest for the Crystal Crown

The Quest for The Crystal Crown was ostensibly written by Annabeth Bondor-Stone and Connor White and illustrated by Joe Todd-Stanton, but the genesis for the book comes from an original story written by real life kid Angie Ortiz, of New York.

It starts, as any good book should, with a beautifully illustrated map, showing Hobbly Knobbly’s Place, the Putrid Forest and the Goblin Cave among other charming destinations. The Quest for the Crystal Crown is about a magical people called the Lysors, once the protectors of the world, now living in retreat in a walled off secret settlement. When their wall is attacked they are forced to face their past, and a young Lysor called Laura sets off on a heroic quest to find the mythical Crystal Crown. Legend tells that the crown once gave the Lysors their power. With her mother’s notes to guide her, and the support of her friends, Laura faces Hexors, goblins and her own insecurities on her path to completing her quest, and thus restoring the former glory of the Lysors.

Angie’s story is only the first part of this book, as the Story Pirates never want kids to just sit and consume, oh no, they want you to get creative.

The last 100 pages of the book is a book in itself called the “Fantasy Creation Zone.” Written by Quinton Johnson, you are taken step by step through creating a world, and writing a fantasy story. There are some great tips in here for budding authors, be they young or seasoned. If you are looking for a good home school English lesson, you can work through the story alongside the guide to identify the different aspects of a story. 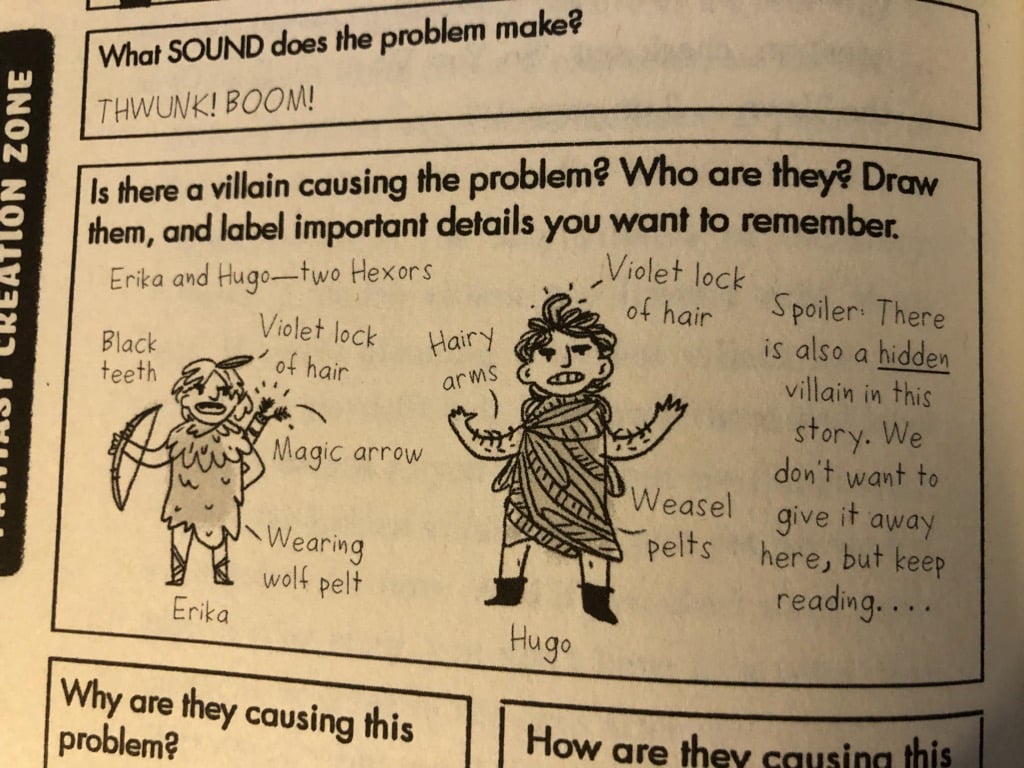 Toby’s Review:
Who was your favorite character and why? My favorite character was Quin. I like Quin because I like the element fire, and he can control fire. Also, I think that it is cool that he is a small mage, small mages can control one element.
What was your favorite part and why? When Donkeycorn was a goblin and they covered his mouth. When he tried to say Hee-Haw they stopped him at Hee.
What do you think happens next? Maybe Laura and the Lysors make peace with the Hexors.

After reading and reviewing the book in brief, we got to work prepping Toby’s interview questions, before Lee Overtree called to chat with him.

Toby’s first question was to ask Lee if he (Lee) could write any story himself, what would it be about?

You can currently keep up with Lee on a limited run of the Story Pirates Radio Show, but story wise, he is  currently writing a theater camp mystery. After that, Toby wanted to know a couple of things that you can only learn directly from a Story Pirate. He wanted to know why the shipmates stop and do stories at the craziest of times. Well, Lee informed him that they want people to be just as excited to return to the ship once the story is over, so they use cliffhangers to hook people into the whole thing.

Toby was concerned as to how Lee would get back on the ship if he were to fall off, but Lee reminded him that he has a seagull friend that would swoop in. Lee told him that it was mostly fun being a Story Pirate, and always silly, but that it can sometimes be a really weird thing to be.

While Toby laughed, I was able to ask my question. Given everything going on in the world of the Story Pirates right now, I wanted to know what Lee’s favorite format was, did he prefer the live shows, the podcast, or the books? For Lee, in true Story Pirates form, it doesn’t really matter. For him, talking to kids is the best part of being a Story Pirate, and as part of that getting to meet kids from all over the world. In a pinch, he would say he prefers doing the songs, but laments that he doesn’t get to sing too much on the show.

In between giggles, Toby came up with some more questions for Lee. First wanting to know why they say “gasp” instead of simply gasping. Lee told Toby that he didn’t really know about that until he read it, so instead of making the sound he said it as a word and it stuck. It’s pretty contagious. We are constantly saying “gasp’ in our house.

Toby was keen to know what Lee liked to do when he wasn’t podcasting, to which he replied exercise or watching Basketball. Toby asked if Lee ever wondered whether Peter has a secret stash of amazing food. Lee suspects that there is cavernous storage of deliciousness somewhere, which prompted Toby to suggest that Peter’s bed was a fridge and to wonder if he had an ice teddy bear. Lee said that Peter did have an ice teddy bear, but that it melted.

Toby’s final question for Lee was extremely serious. What was Lee’s favorite sandwich? The answer? An Italian sandwich with mozzarella, salami, balsamic vinegar, and Arugula. Toby was left with the strictest instructions not to tell Peter about Lee’s sandwich.

At the conclusion of the interview, Toby’s four-year-old sister piped up with her question, which was to ask Lee if next time he could come to our house and push her on the swing. He said he would love to, so at some point I expect to see the ship landing in Maine.

We will have plenty of sandwiches waiting for them. 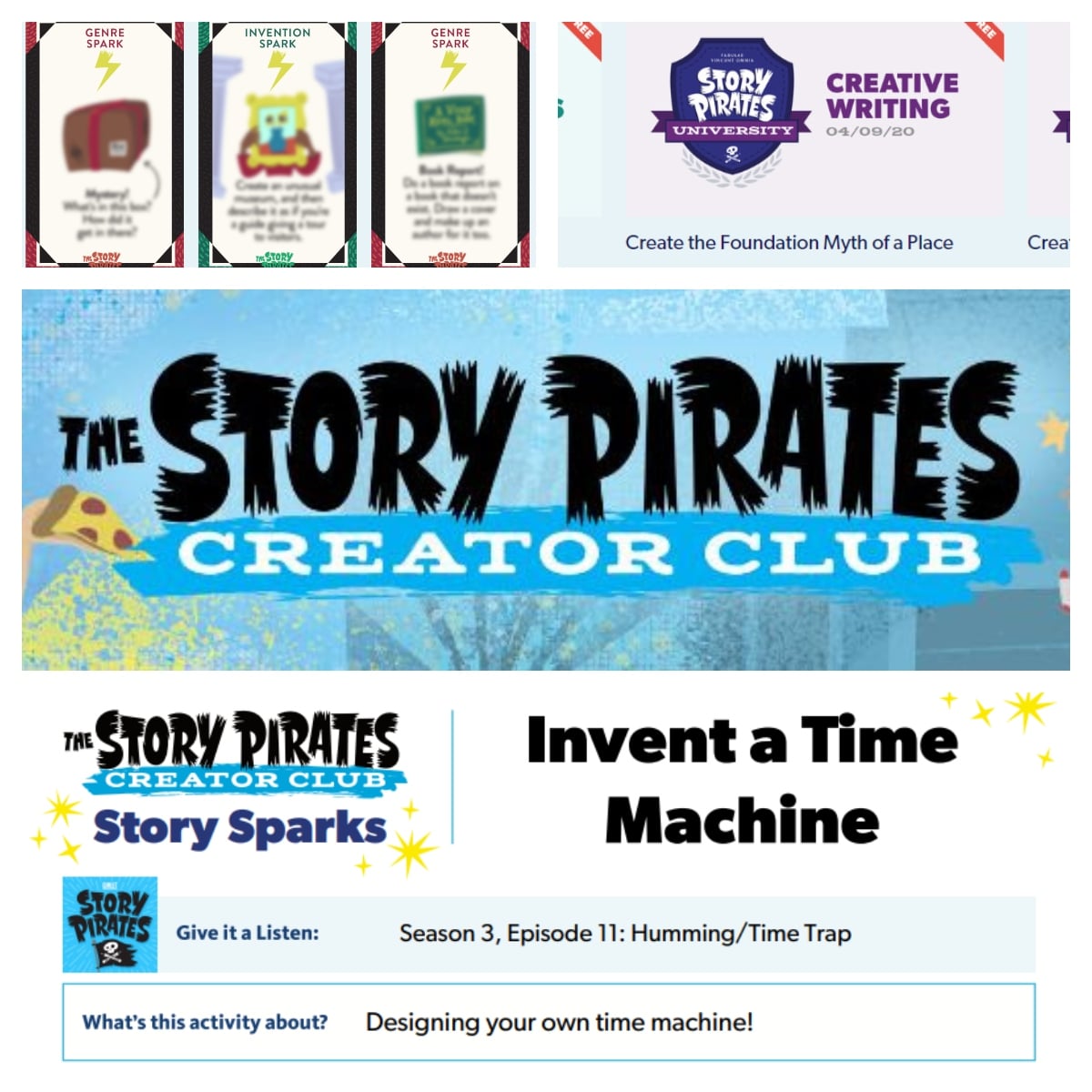 How You Can Use Story Pirates

The Story Pirates helped us survive our first big family road trip, and now is helping us keep our creativity mojo while we navigate pseudo home school.

The Story Pirates Creator Club is a content and activity subscription where kids, families, and educators can access a virtual cornucopia of creativity. You can watch live stream classes, listen to the limited special series on Story Pirates Radio, and get exclusive activities that link to each week’s podcast episode. In addition you have full access to a growing library of creative writing curriculum videos, and access to Story Sparks, a collection of exclusive illustrated writing prompts. There’s so much more contained within a membership, and given the nature of the group at the helm, I’m sure it will only continue to grow.

In the schooling world of 2020, this could not have come at a better time. The premium membership members offers some extras, such as the ability to collaborate with other members to create art and writing content. Your kids could create with their classmates, or with someone from the other side of the world. Memberships are only $5 or $8 a month, but you can get the first month absolutely free to see if it’s going to be a fit for your kids. It’s a win win situation.

The Story Pirates are constantly coming up with new ways to inspire creativity in kids, and to encourage kids to use their talents. There couldn’t be a better time to introduce this marvelous group to your family.

GeekMom received a copy of this book for review purposes and took advantage of the first free month of Creator Club that is available to every new member.

How to Introduce Your Kids to Things You Love