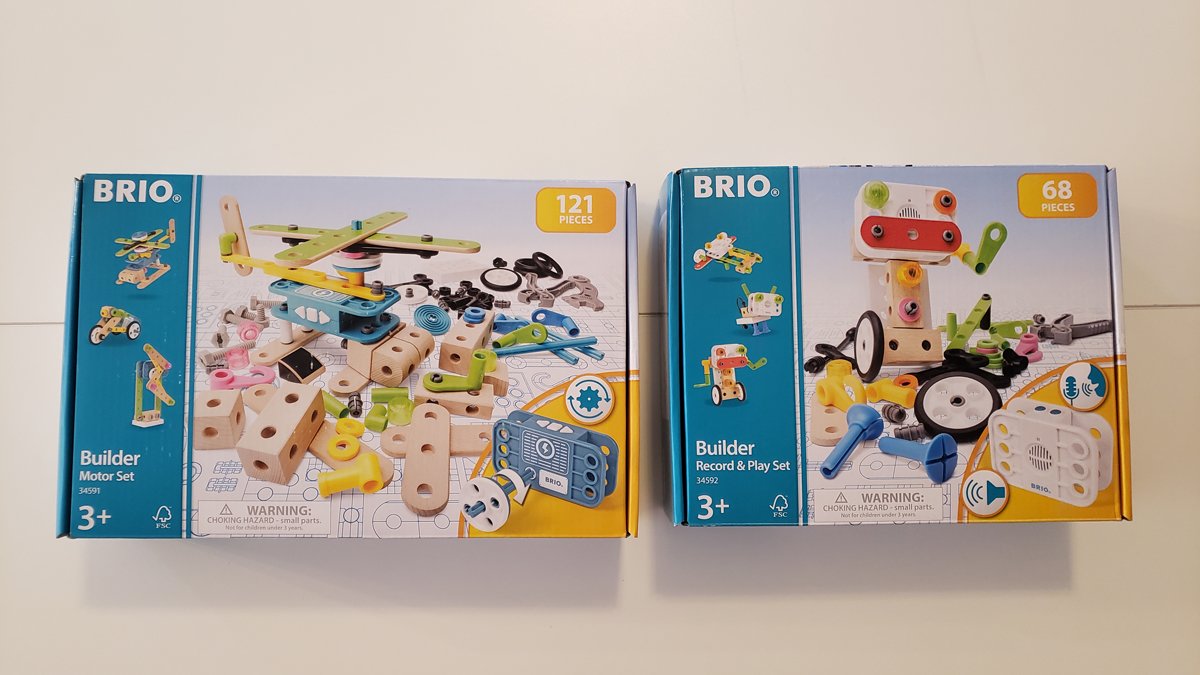 A, our nine-year-old, has been a LEGO fan for a long time, but in the past six months or so he’s really gotten into other STEM type building sets. We’re familiar with the BRIO brand because of their famous wooden train sets, but I hadn’t branched out into their other products. Then I got a chance to check out and review some of the newest editions to the BRIO Builder line, the BRIO Builder Motor Set (MSRP $59.99) and the BRIO Builder Record and Play Set (MSRP $39.99).

We cracked into the Motor Set first. It’s a decent-sized set (121 pieces) with a lot of piece variety. They’re all made of both wood and plastic, but like other BRIO products, they’re the sturdy sort of solid quality that makes these the kind of toys most likely to be handed down through siblings. It comes with a little booklet that gives some ideas on things to build, but there’s clearly strong encouragement for kids to build whatever they can dream up.

The boys wanted to build the windmill looking thing first and set right to it. The idea book does not include step-by-step directions, so there was a lot of looking at the picture and sorting things out from there. A really takes to that, and after a few little corrections, he was able to figure it out. Some of the pieces were a little more challenging to place together than others, but using one of the included tools to help put in pieces and not just to take them apart really helped.

The motor unit does require 2 AAA batteries, and you’ll need a screwdriver to open up the unit to put them in. However, the boys loved watching what they built actually move.

Next up was the Record and Play Set. This one has 68 pieces with the focus being a unit that can record and play small sound snippets. Like the other set, it includes sturdy wooden and plastic pieces with enough variety to really let a kid’s creativity get going. This one also had a booklet with some ideas, and the boys selected the cat-like creature. Now that they had gotten the hang of things from their first build, building this second project went a touch easier. A still took the lead on things, but W (age 6) was able to help build with some guidance. Once they got the cat together, they were able to press the little record button, make a silly noise, and then play with it (no batteries needed for this one). They honestly spent about the next hour playing with the cat alone once it was built.

The next day, A gravitated back to the sets to try to build a robot, so I can tell this is already going to be a toy series he’s really going to enjoy. We’ll likely store both sets in the same box to also encourage some freestyle building, and I’m curious to see what they might come up on their own. The toy is marked ages 3+, and while the pieces are probably safe for this age range, I’m going to say that being able to use the idea book and actually pop things together is going to put play age more like 8+ with some wiggle room if you’ve got one of those kids who got their hands on a more toddler-geared version and never looked back.

Overall, it’s a worthy toy for your collection because of the obvious STEM learning it encourages, especially with so many kids stuck at home right now. The quality and variety of pieces, the interactive features, and the clear educational value make the prices for these sets well worth it. Replayability is high and the more sets you have, the more complex things kids can make from them. If you’ve got a kid who loves to build things, especially interactive things, this is a toy they’re really going to be into. Honestly, I can see quite a few parents who are going to have fun building things with their kids too.

GoldieBlox: An Interview with Debbie Sterling and a GeekMom's Take On Girls and STEM

The Ultimate Lego Manual – The Cult of Lego