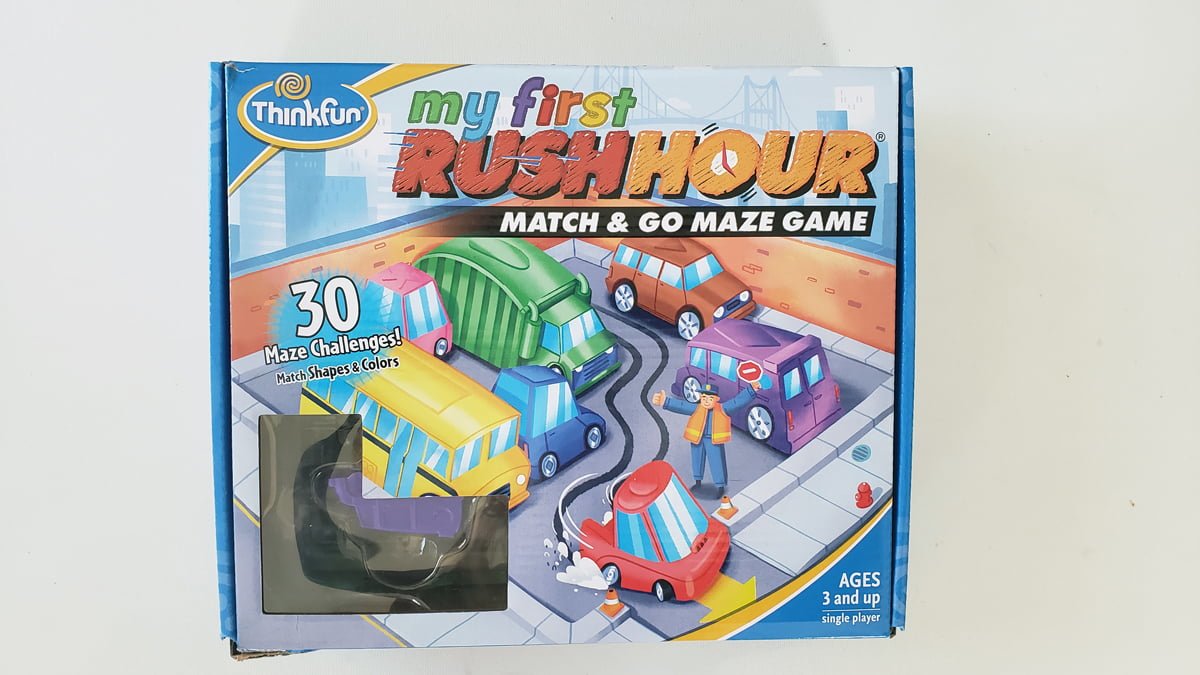 Logic puzzles are very big in my house right now, especially since they are calm activities a single kid can do on their own, and sometimes my kids need downtime from each other which has become a much bigger thing while we, like many families right now, are social distancing. The challenge comes with W, our six-year-old. A lot of logic puzzles are at an age range just a touch above his abilities so he gets frustrated trying to do them. So when I got the opportunity to receive a copy of My First Rush Hour from ThinkFun, I was eager to see if it might be a better fit for W.

What is My First Rush Hour?

My First Rush Hour is a single-played logic puzzle game for ages 3+ made up of 30 Challenges that each take a few minutes or so to play. It has a MSRP of $23.99.

Overall, it’s a nice sturdy game for the age that it’s geared towards. The Plastic Vehicles, Hero Car, and Safety Officer are made of brightly colored plastic and sturdy enough that stepping on them upside down would be akin to your bare foot meeting a LEGO.

The Parking Lot Game Grid is also a very solid clear plastic and designed so that the Challenge Cards easily slide beneath and give a blue print for players to set up each Challenge.

The Instruction Card and Challenge Cards feel like a slightly thicker playing card. They’re a good size for little hands and everything is visually large and clear enough to be identifiable for the younger crowd.

How to Play My First Rush Hour

The goal of My First Rush Hour is to help the Red Hero Card escape the Parking Lot Game Grid through a series of 30 Challenges with increasing difficulty. To set things up, players will have to match shapes and colors.

Because it’s a game with a target audience of preschoolers, setup is pretty easy. Simply slide a Challenge Card into the Parking Lot Game Grid and then set up the Red Hero Car, Safety Officer, and relevant Vehicles as shown on the Card. Players should make sure they are noting where the headlights go. Colors, shapes, or size may be used to indicate where the pieces go. This helps the preschool crowd practice color and shape matching in particular. Once the pieces are all in place, you’re ready to play.

The pieces can move in the following ways:

Like with setup, gameplay is pretty straightforward. Players must navigate the Red Hero Cararound the other pieces, but other Vehicles may also need to be shifted to allow it to move. Once the Hero Car can escape, the Challenge has been beaten and you can set up for the next one. The Challenges do increase in complexity for setup and solving.

Really, you can play as much or as little of the game you want in one sitting although the ultimate goal is to be able to beat all 30 Challenges.

Why You Should Play My First Rush Hour

I’m a big fan of the educational value of logic puzzles, and if you have a kid of preschool age, My First Rush Hour is a great way to start teaching them the critical thinking skills needed for such activities. W had a lot of fun playing, but as a Kindergartner, it took the much later numbered puzzles for him to really pick up on feeling the challenge. He was however, able to go from this to taking on the Beginner Levels in Rush Hour which is recommended for ages 8+, so I do think this did build some of his confidence up. That being said, I think the age range for My First Rush Hour should be about 3-5. Once a younger kid can master My First Rush Hour, bounce them up to Rush Hour Jr and for kids of at least 8+ you can go straight to Rush Hour.

For the preschool age, it’s a sturdy game clearly designed for younger kids with durable parts that should be easy to use. Setting it up, cleaning it up, and playing it should quickly become something the can do all by themselves. There’s not as many logic games out their aimed for kids as young as three, and there’s an added bonus of the fact it doesn’t require batteries or need to make pre-programmed noises. The MSRP of $23.99 is right about where I would it expect it be and you can currently get it for that price on Amazon. 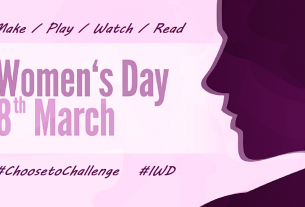 Make/Play/Watch/Read: IWD 2021 and Choose to Challenge