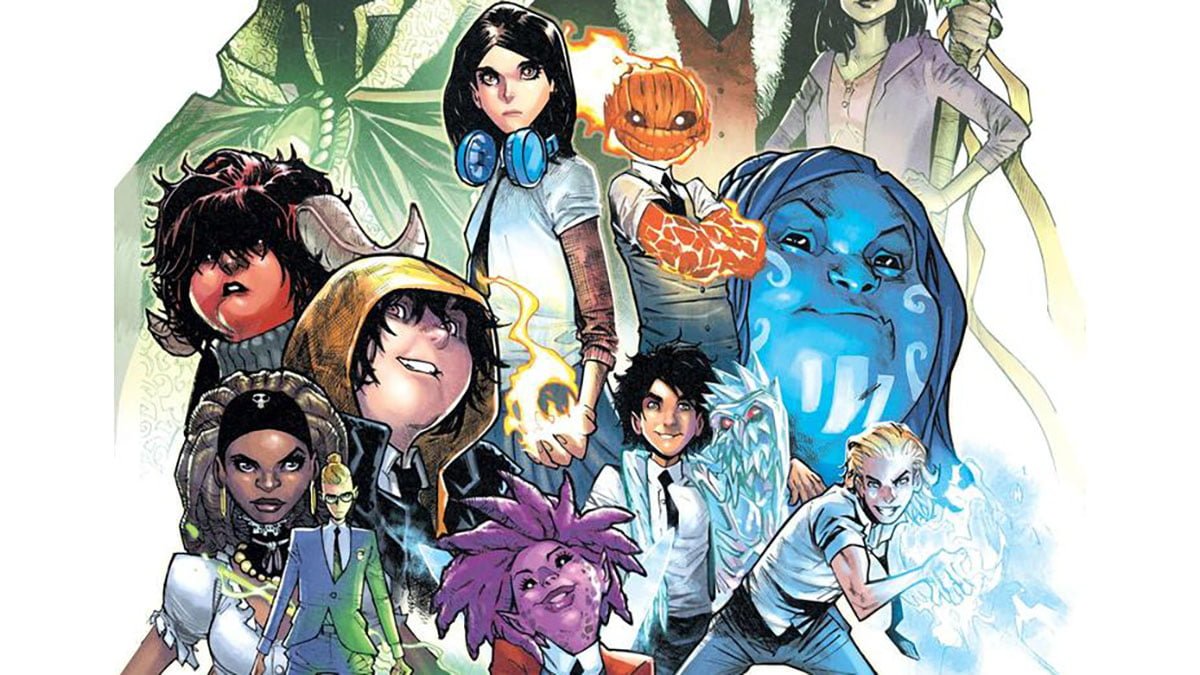 Strange Academy #1 launched March 4th and the Marvel comic universe all at once became a much stranger and more interesting place. Skottie Young and Humberto Ramos bring together the greatest magical powered teachers, under the guidance of the Sorcerer Supreme and hand them a freshman class filled with diverse, decidedly unique magical adepts who are brimming with both talent and personality.

Strange Academy #1 is the comic book we’ve been needing from Marvel. The story is an energetic and engaging read for both adult readers and younger fans, it’s the kind of story that is equal parts familiar and fresh. Yes, we’re once more at a school for gifted youngsters but we’re not wading through a morass of alternate timelines watching rehashed versions of decades-old plots that require a half a dozen extra issues of tangentially related titles and an understanding of events that occurred a hundred issues ago. All you need to enjoy the story in Strange Academy #1 exists between the covers of this issue. This is a series that is going to be entertaining for both longtime Marvel fans and new comics readers. 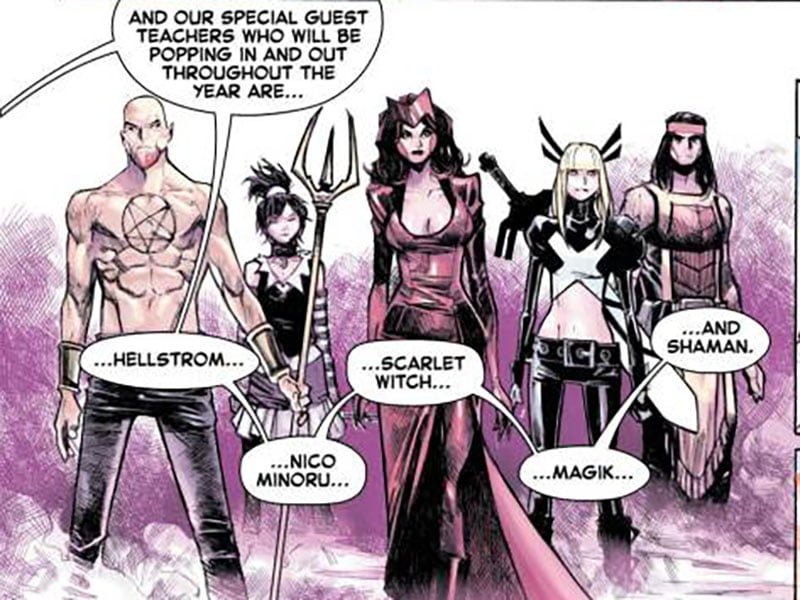 Strange Academy #1  might seem like a re-spin of the long-running popular series X-Men because once more we are seeing gifted youngsters with incredible powers and dealing with a crazy world while they try to live their lives. I expect though that the base premise is where the similarity will end – unless you count the fact that this is going to be a hugely popular series. If this first issue is anything to judge by then you can expect an insane amount of fun mixed into every story. I’ve said it before Marvel tagged the best comic book veterans for this high-action, fantastic, fun-filled journey through the world of arcane education:

Skottie Young is the perfect writer to bring us fresh stories about intriguing characters. he sets the tone from the start with his signature mixture of fantastic wonder, whimsical moments. From day one he lays the groundwork for readers to expect the unexpected tinted with a bit of the familiar. He takes all your favorite flavors of tales and blends them into a completely new cocktail of humor and sobriety.

Humberto Ramos is as Skottie told us, the perfect artist to bring this story to life. Ramos’ style falls between cartoons and in-depth life drawing. It’s this balance that he deftly strikes that makes these young characters stand out. Ramos flair for exaggerated styles lends itself well to the unique, eye-catching designs of these promising students. In Strange Academy, #1 Ramos demonstrates his talent with imaginative backgrounds and emotive expressions.

From the backgrounds to characters (both teachers and students) to the nasty beastie that pops-up for an unexpected first lesson, the colors are bright, vivid, breathing life into every part of this issue. Delgado does some of his best work whether it’s the nuanced coloration of the full-page splash of the campus, the New Orleans energy, or the action-packed, first lesson the freshman class undertakes, Delgado’s colors infuse this new world with exactly the right amount of fun, and fantasy that lifts Ramos art to another level. 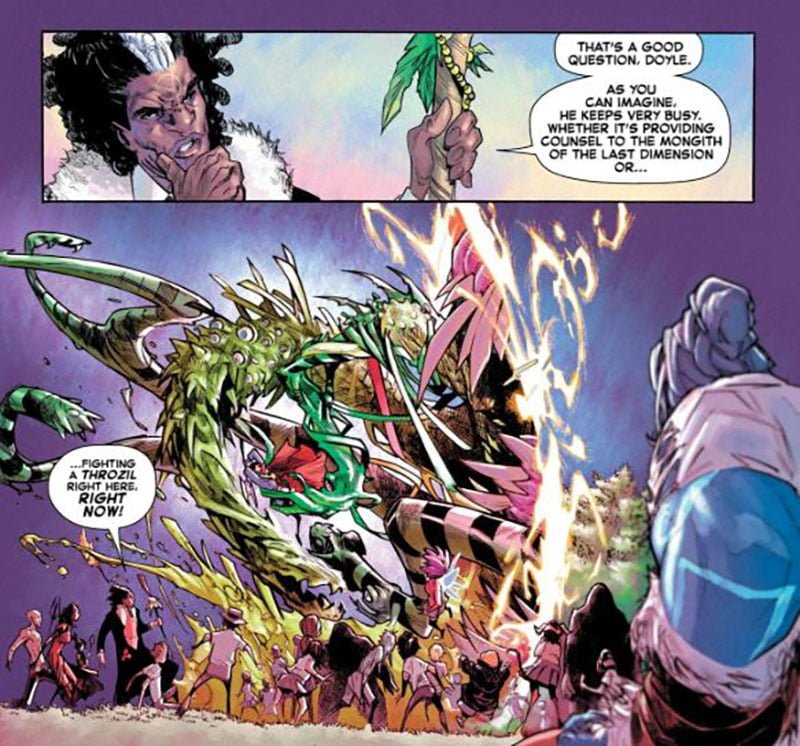 The story starts off centering on Emily Bright a young girl who’s had immense magical power since birth. Rarely is a child so young able to send death packing! Unfortunately, what Emily and her family don’t realize is that magic comes with a cost and her formidable abilities make her a target. Emily enrolls eagerly in Strange Academy to understand her gifts. Her worried parents reluctantly accept it because it’s clear she will need protection. Zelma escorts Emily to Strange Academy where she meets her classmates. From this point on the feel is that this is going to be an ensemble series with this cast there’s no doubt it’s going to be fun.

Emily is certainly not the only magical adept to realize that they need training. Upon arrival to Strange Academy, Emily is introduced to … or more accurately pounced upon by Shaylee Moonpeddle. Shaylee’s exuberance is only outshined by her vivid pink skin. Anyone with half a brain can see these girls are going to be BFF’s but this isn’t going to be a girl buddy series. Nope, toss is several children of sworn enemies, add a touch of attitude, sprinkled a full dose of sarcasm and you have the perfect teenage cast. 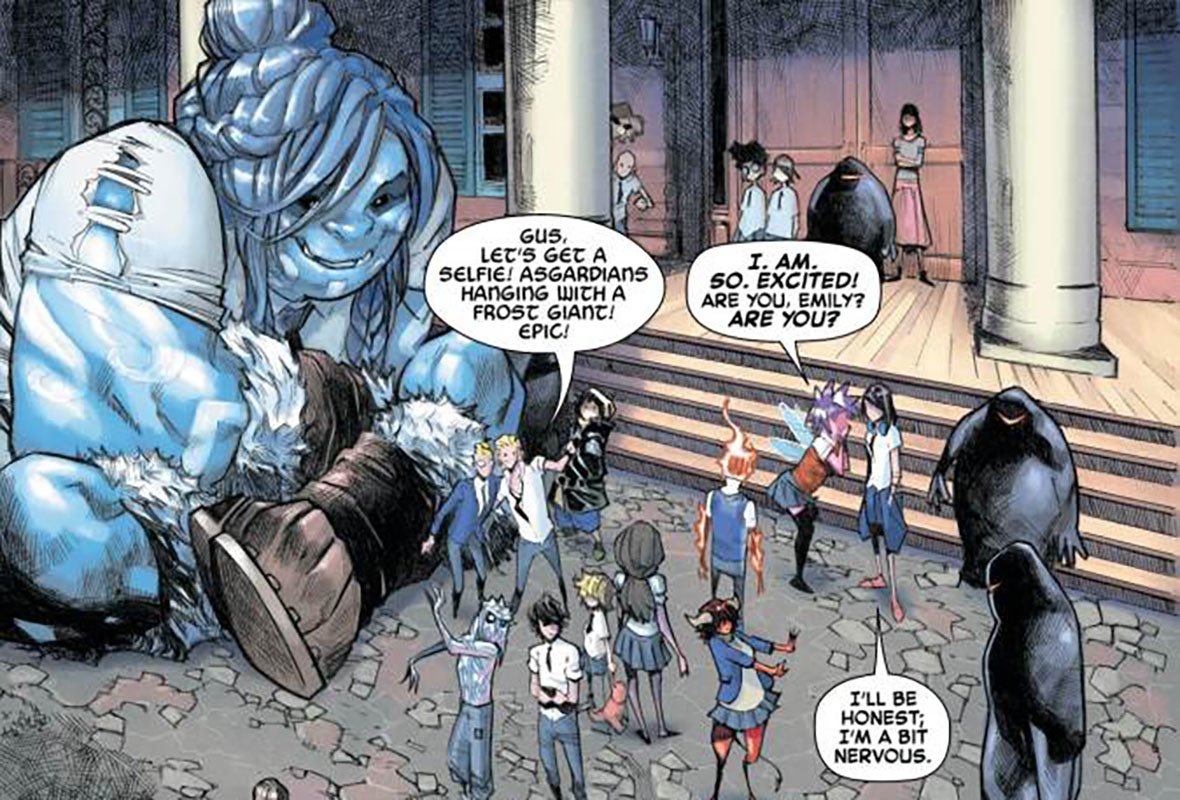 Bright, bouncy, with the most positive attitude this side of oblivion, Shaylee, is eager to make friends and learn magic. This effervescent fairy winds up being Emily’s roommate and it looks like her dream of eating popcorn late night with a friend is about to come true. Let’s hope fairies aren’t allergic to popcorn.

Way to calm, and chill for a guy who is the illegitimate son of Doctor Strange’s arch-enemy Dormammu of the Dark Dimension. It’s not just family resemblance that is uncanny, because Doyle clearly gets his power from his father. When we see who his roommate is we know it’s going to be a wild ride.

Magically-gifted, twin brothers from Asgard (no, they don’t know Thor) who’ve brought with them all the prejudice and arrogance any teen god could muster. Their reaction to seeing a Frost Giant earns them a scolding from Loki but doesn’t stop them from taking a selfie.

This enormous Frost Giant from Jotunheim seems to be of special interest to Loki given that the God of Mischief ( also the new King of the Frost Giants) is personally handling arrangements Guslaug’s attendance at Strange Academy. We don’t learn much about Guslag this issue but I have a feeling placing a Frost Giant in the same class with Asgardians is a recipe for messy moments. 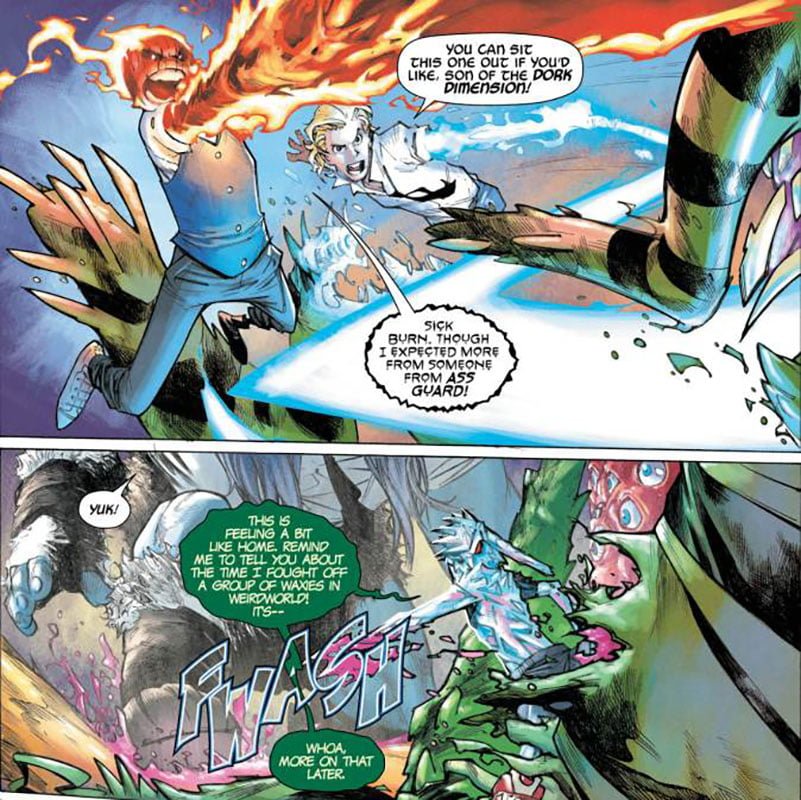 The great, great, granddaughter of Marie Laveau, the Voodoo priestess who trained Doctor Voodoo, and tried to kill Doctor Strange (Multiple times) seems to be the most low-key of the group. Her roommate suggests she might be hiding something but let’s face it Zoe’s roommate is a bit…extra.

A child of earth’s foster system who found an enchanted leather jacket, Calvin is easily the happiest kid at Strange Academy (except maybe Shaylee). The foster system hasn’t been kind to him but he seems resilient even if he does annoy his roommate just a bit.

Demon from Limbo with the ability to see things as they truly are. Dessy is the goth girl all Goth Girls wish they could be and yet there’s something about her. She’s very self-aware but unapologetically herself. I can’t wait until she meets Nico Minoru.

Toth is a half-Crystal Warrior and half-Man-Thing from the swamps of Weirdworld, and other than the fact he has no issue swimming in the bayou (yikes) we don’t learn too much about him.

Another unknown quantity, Germán seems to be human and during their first lesson we see that he is some form of animage. We don’t get much else except that he tries to be friendly to Toth.

I’ve been waiting for a series like Strange Academy for a long time. I really can love this issue more. I’m all in for this series. It’s not that I don’t love my X-Men, I still do but the relationship has gotten…complicated. With Strange Academy #1 I feel confident recommending it to most Marvel fans out there. I’d especially recommend it to new readers who want an easy entrance to the Marvel Comic Universe. You won’t feel overwhelmed or need to grab a tons of back issues to understand the plot. Grab it while you still can. Issue #2 comes out on April 1, 2020 – interestingly. 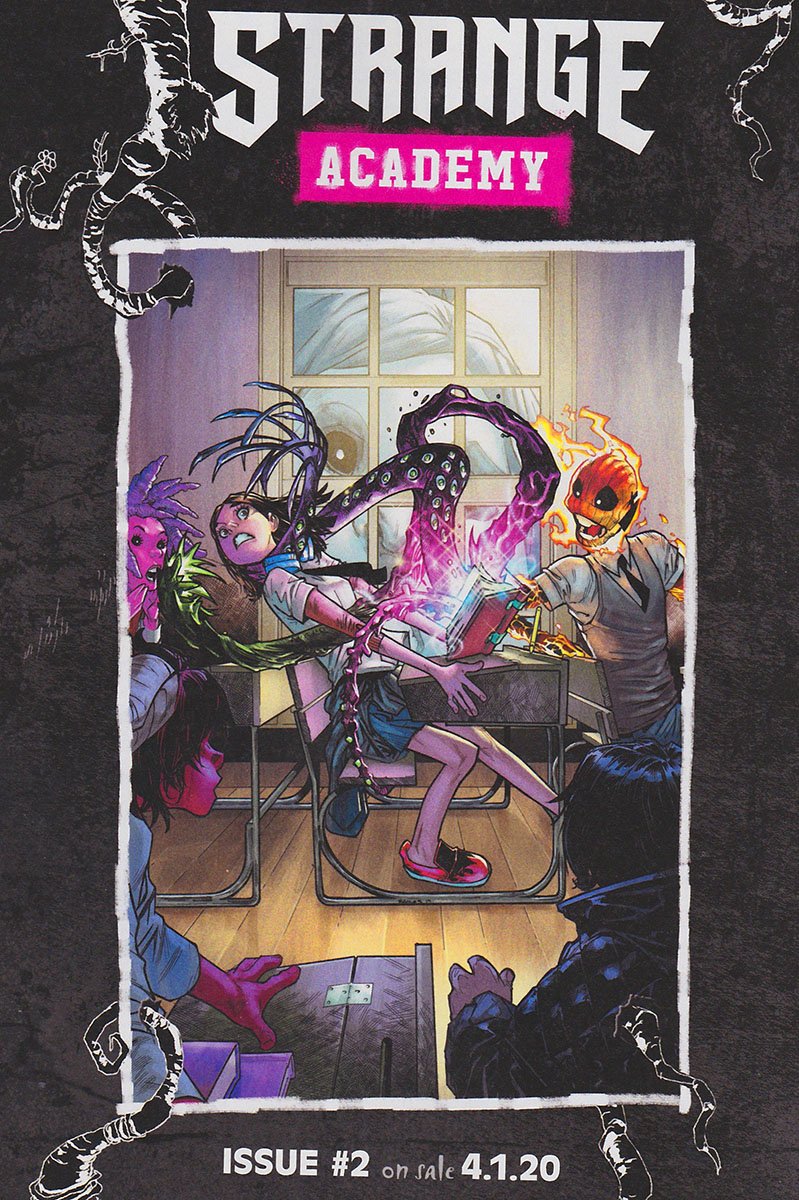 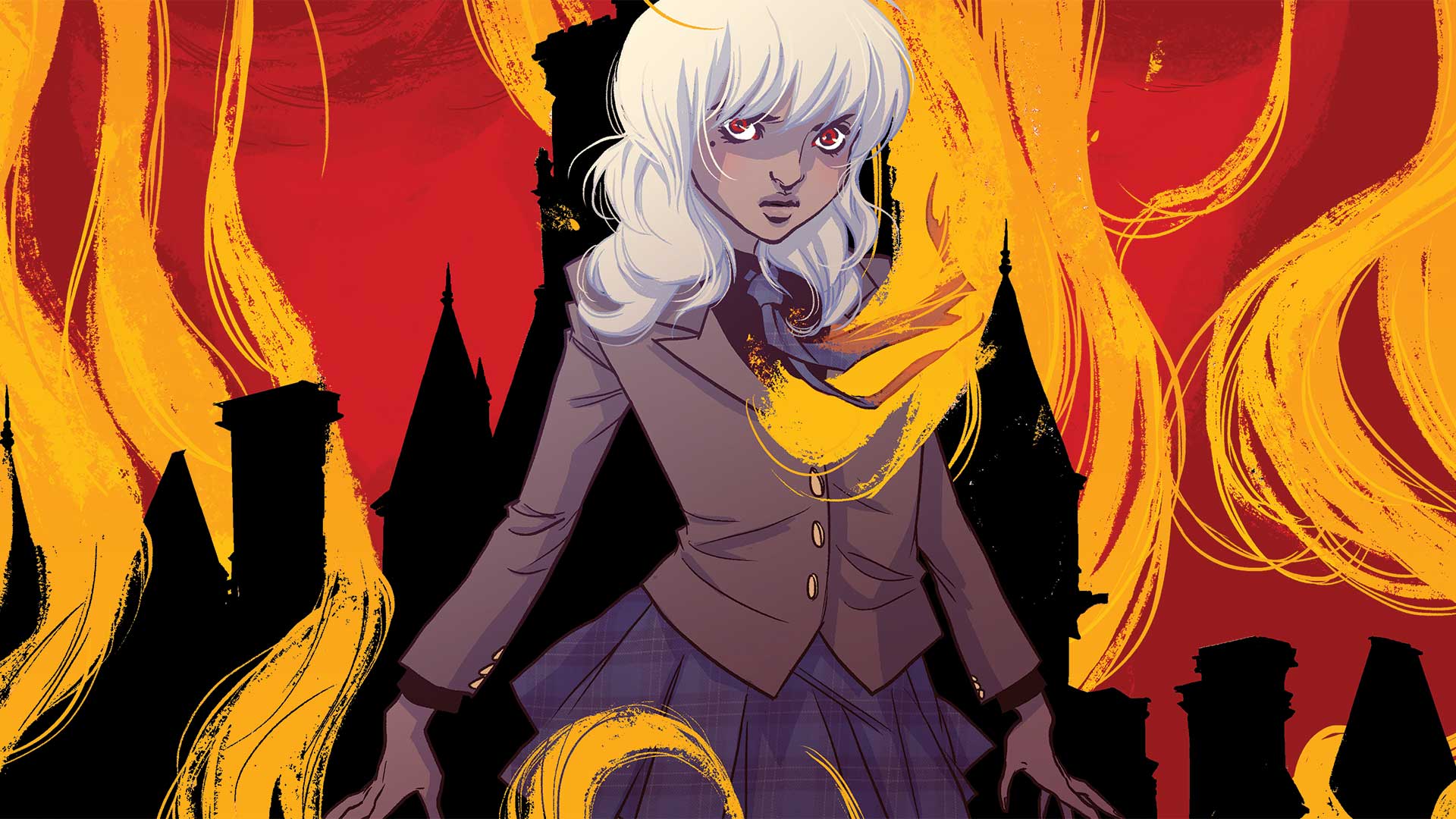 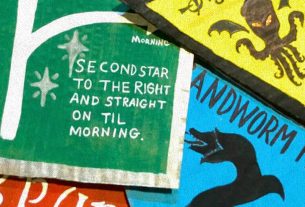 Be the Artist: The Art of the Road Sign