As we settled into the new decade, we continued on with our reading journeys. This month, Sophie and Rebecca share some of the books that saw them into 2020.

The Spirit of Springer: The Real-Life Rescue of an Orphaned Orca by Amanda Abler

Sophie’s first book this month was a short one with a long title. The Spirit of Springer: The Real-Life Rescue of an Orphaned Orca by Amanda Abler is a beautifully illustrated telling of a true story with a truly happy ending.

In 2002, an abandoned killer whale calf was spotted in Puget Sound just off the coast of Seattle. The calf was identified as Springer, a member of the A4 pod of Nothern Resident orcas who swim off the coast of British Columbia—several hundred miles north of where this calf was found after the apparent death of her mother. A group of scientists from the USA and Canada banded together to work out how to safely capture, rehabilitate, and release Springer so she could be reunited with her family.

The book tracks the work put in by these scientists from explaining how they identified Springer, why the decision was made to move her, and the difficult processes needed to do so. All throughout the book are gorgeous full-page illustrations by Levi Hastings that really bring Springer’s story to life and, at the end of the story, there are pages detailing the route used, a guide to Springer’s family tree, and information about Springer’s life after her voyage.

Sophie absolutely loved this gorgeous book. The happy ending is just what she needed during these dark, winter months, and she thinks that this will delight anyone with an interest in marine life and the scientists who work with orcas.

Sophie’s second book of the month was American Food: A Not-So-Serious History by Rachel Wharton. This interesting book takes readers on a journey from A to Z through classic American dishes and is thoroughly illustrated by Kimberly Ellen Hall in a really unique and unusual style that fits perfectly with the road-trip feel of the book.

For each of the 26 featured dishes, Wharton explores their cultural significance and history, occasionally sharing a recipe as well. The history of food is the history of culture and this book offers a look at the unique circumstances that led to the creation of many of these dishes. Many of the items you would expect to find here are indeed included: donuts, shrimp and grits, hot wings, and Jell-o are among the entries, but there were also some surprises—xantham gum being prime amongst these, although admittedly there probably weren’t too many options for the letter X.

As a non-American, Sophie certainly found several dishes included here that she had never heard of before. Ambrosia and green goddess salads, zucchini bread, and vinegar pie were chief among these and she found herself wondering just how big a part they play in the national consciousness compared with say, t-bone steaks and Italian sandwiches? Regardless, she quickly racked up a long list of things she wants to try on the coast-to-coast road trip she still hopes to embark upon one day.

As the title suggests, this is a not-so-serious look at American cuisine, so don’t expect anything too detailed here. Rather, each entry is just enough to whet your appetite for more and leave you feeling hungry too—Sophie suggests you don’t read this one before bed unless you’re planning on a midnight snack! Ideal for social historians and food lovers alike, American Food is a cute little book on a subject dear to all of us.

Catfishing on CatNet by Naomi Kritzer

Based on a Hugo Award-winning short story, Catfishing on CatNet is a thought-provoking and pleasingly diverse YA novel that Sophie really enjoyed and thought was much better than its title. Trigger warnings apply for domestic abuse.

CatNet is an online social media site where users are automatically bundled into groups with like-minded others. Unlike other social sites, however, it is secretly run entirely by a sentient AI known as CheshireCat who is trying their hardest to understand the world and their place in it, and who happens to really enjoy looking at photographs of cats.

Steph is a teenage girl forever on the run with her mother from her abusive father. Unable to ever settle anywhere or put down roots, her only long-term friends are the members of her group on CatNet, although she is desperate to form friendships in real life too. When CheshireCat experiments with influencing the real world and improving the lives of their human users, just as events also cause Steph to have doubts about the stories her mother has always told, it throws Steph’s life into chaos. With her mother stuck in hospital—allowing their past to catch up—Steph has to rely on her CatNet friends and the new friends she has made in school to help save herself and CheshireCat too.

While Sophie found the first half of the book quite slow going, the latter more than made up for it, turning into a well-paced thrilling adventure she couldn’t put down. The book explores a lot of relevant topics regarding the future of AI, self-driving cars, facial recognition technology, and more, while also introducing likable characters and a constant sense of doubt about everyone’s motivations. If you’re interested in this book, Sophie recommends also checking out the short story it is based on—Cat Pictures Please—-for free on the Clarkesworld Magazine site.

The picture book Snowy Race is every little kid’s dream, or any kid, or Rebecca, actually. Riding a snowplow! Not a truck with a plow on it, but an actual, huge, official snowplow. Rebecca’s children grew up in Syracuse, NY, one of the snowiest cities in America, so the sight of the enormous plows was a familiar and exciting one.

The main character is a young girl who wakes up and sees it’s snowing. It is also a special day on her calendar, though the reader won’t know why until the very end of the book. The dad makes them a quick, hot breakfast and then they hop into his snowplow, making their way through huge mounds of snow in rural areas and the town, clearing a path on their way to a very specific, happy destination.

The story is told in rhyme that Rebecca’s young children used to be able to memorize quickly so they could “read” the book alongside her.

The illustrations are colorful and soft with joyful and expectant faces in the characters as they go into the storm. What a perfect book for kids who live with snow and always wondered what it would be like to ride in the big snowplows, or for kids who have never seen a flake to read about a new experience.

The Luckiest Snowball By Elliot Kreloff

The picture book The Luckiest Snowball is one of the most creative stories to explain the differences in the seasons to small children that Rebecca has ever read. Originally, she thought it was a winter book, but it only begins in winter. We meet Larry, a talking, friendly snowball created by a young boy named Izzy (accompanied by a small, plaid coat-wearing pup). They play all day long in the winter and Larry can’t bear to part with his new friend, so he brings him inside his house, introduces him to his mother, and sticks him in the freezer.

And this is where it gets really interesting. We then see the changes of the seasons from Larry’s POV, from what foods the family puts in their freezer. All the foods chat with Larry about their season, though none last very long. Once a season, Izzy takes Larry out of the freezer to show him the outside world, which is amazing to the snowball until he starts to melt. He is saved just in time and put back into the freezer, though the summer cooler on the beach was a close one!

Eventually, we make it back to winter, where Larry gets to play all day in his natural element and decides to stay in his proper season. It’s a fun story with such a unique POV of what season are both inside the house and out. The back of the book has science notes on seasons in general and snow properties.

Rebecca recommends this book for ages 3-5. 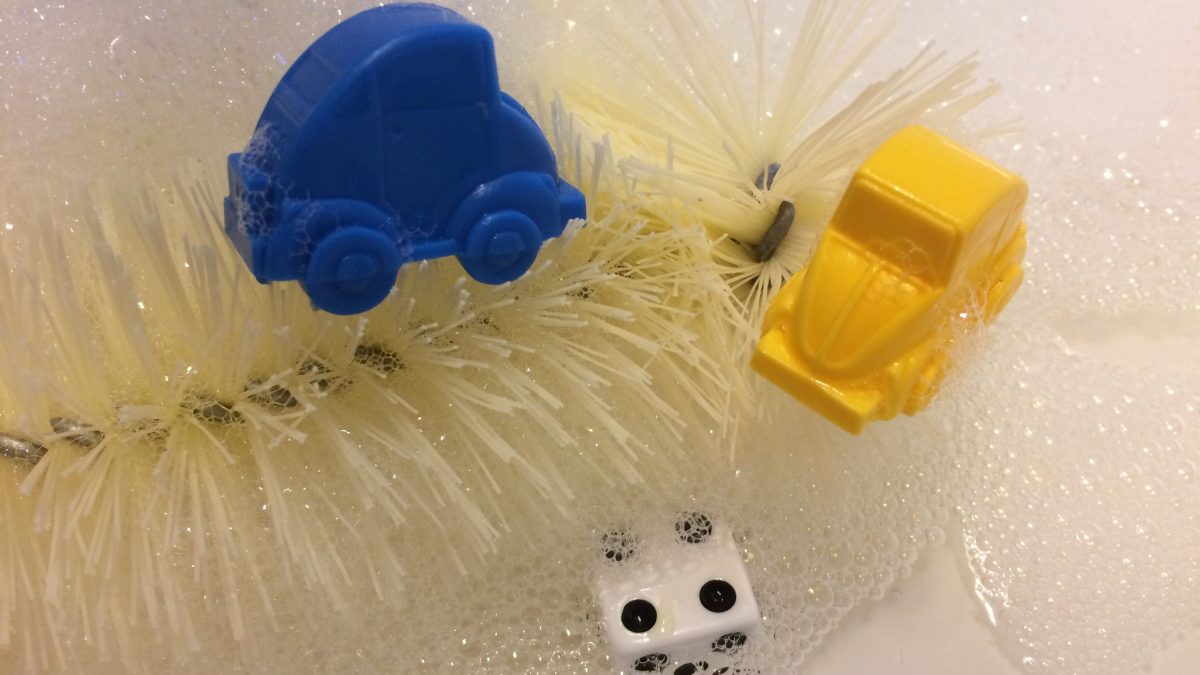 Disaster at the Car Wash Shows My Live-Action Gaming Style

Fund This! Crafteeo, iBesties, Maxwell's Soaps, and ReBoot the Suit!