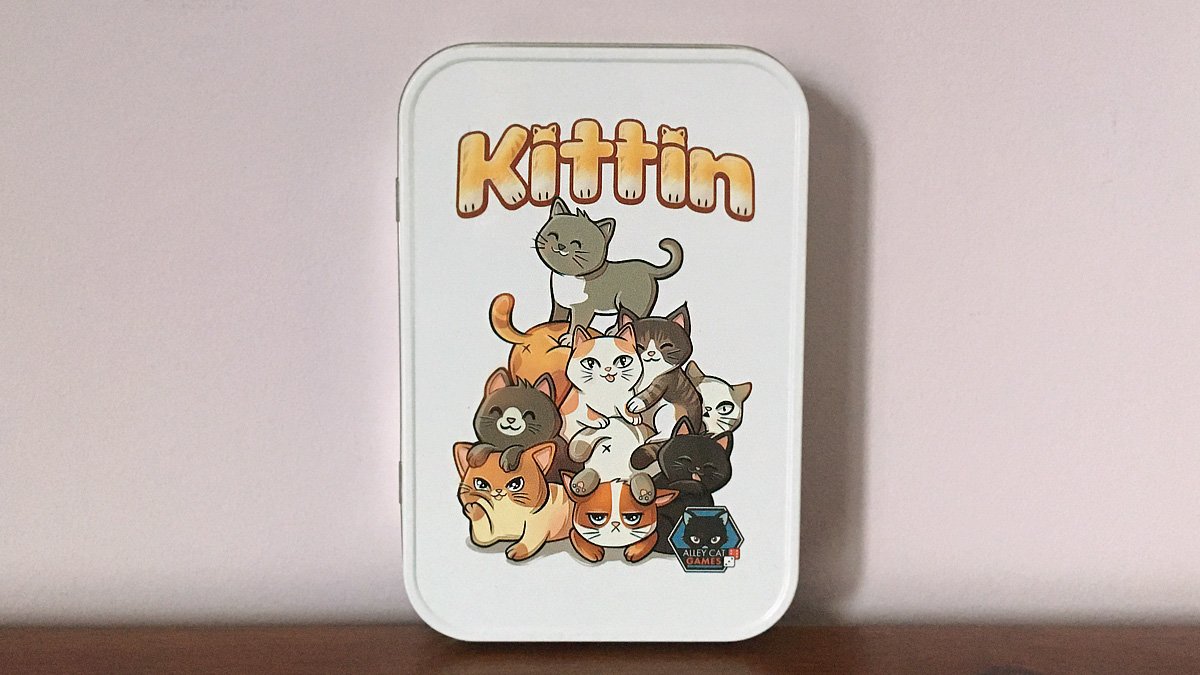 Kittin is a new speed and dexterity game from Alley Cat Games currently funding on Kickstarter alongside another similar game from the same company – Tinderblox. You play by building stacks of wooden cats to match the design shown on the active card, but can you build fast and accurately enough to beat the other players?

My copy of Kittin was a prototype so it may differ from final production copies, but I absolutely loved all the components. The wooden Kittin pieces feel great to handle and manage to be unusually shaped while still being recognizably cat-shaped, and the bright, bold colors make them really stand out. The box art is utterly irresistible and will no doubt help you convince even the most reluctant tabletop gamers to have a go.

As with Tinderblox, the cards are very small which is great for storage but might make the symbols difficult to read for some players, however, as there is no text to read, hopefully, this shouldn’t be too much of a problem.

Finally, in the prototype I received there is very minimal plastic, and I hope to see this continued across to the production version of the game.

How Do You Play Kittin?

Begin by tipping out all the wooden Kittin pieces into the middle of the playing area. Shuffle the deck of cards and place them in a facedown stack beside the Kittin pieces to make a draw pile.

You will also need to decide whether you are playing individually (two-four players) or in teams of two (two-eight players). This review focuses on the individual players’ game but instructions are included for both individual and team games. Once this is decided, you are ready to begin playing.

The oldest player flips over the top card of the draw pile and lays it so that all players can see it. All players then grab for Kittin pieces that match the colors shown on the card and begin stacking them to exactly match the design shown. The Kittin pieces must be stacked on top of one another and not laid flat on the floor (although this method could be used to help younger children play). If your stack falls down during construction, just rebuild it again until it matches the card.

When a player has built a stack that they believe exactly matches the design on the active card, they shout “Meow!” All other players must immediately stop stacking and check that player’s stack. If it is correct, that player wins the current card. If it is wrong or falls down, that player is out of the round. The other players begin stacking again and the process is repeated until a winner is found.

The winner of the game is the first player to win three cards.

Should You Buy Kittin?

I really enjoyed playing Kittin, which says a lot considering I am not generally a fan of speed games or games where things fall down suddenly (Jenga is exceptionally triggering for me). Here, however, speed is only one of the elements required for successful play. There are enough pieces for all players to be able to grab what they need – so no need for Hunger Games-style theatrics to grab your pieces before other players, not that that will stop some people! Once you have your pieces, Kittin becomes a balancing act between speed and care, yes you’ll need to stack your Kittin pieces quickly to be able to win, but go too quickly and you’ll risk knocking everything down and having to start again, so some caution is also required.

One of my issues with Kittin was that it includes relatively few card designs. Our prototype has just 17 different cards and I feel like these will quickly become repetitive. With the variety of Kittin pieces included, it doesn’t seem as if it would be too difficult to have included more card designs to copy, including some trickier “expert level” ones. That being said, I did like that many of the cards included Kittin pieces that had to be used upside down or laying sideways, this caught out my ten-year-old several times in our first few games!

Kittin is a cute, fun game that will appeal to a lot of people. The box art is especially adorable and the pieces are bright and colorful to add to the appeal. The game is incredibly fast to learn and will be ideal for family gatherings with a mixture of ages. I’d love to see a few more cards included but this is a minor gripe in an otherwise excellent game.

There’s No Wrong Way to Write a Review

GeekMom And GeekDad PAX East Panel To Be Live Streamed!