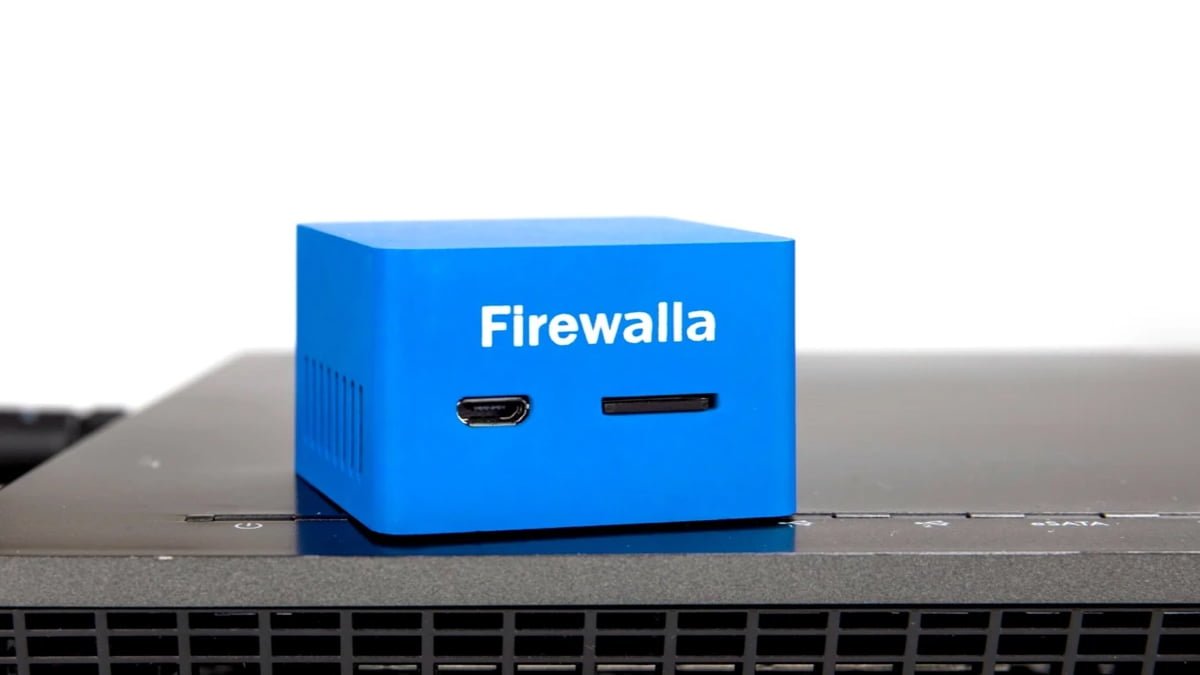 Firewalla is one of the newest little devices to hit the market with the promise of protecting you from intrusions while also giving you the ability to keep an eye on the internet usage on your network. It comes in two flavors: Red and Blue. Red is for the average home user. Blue is for those with more than 50 devices on their network and businesses. For those with kids, this could easily become a babysitter for their internet time. For me, though, it’s more of a tool to teach my son to make better decisions based on a real-world fear that anything you do on the internet can be tracked and seen if you are not careful.

For this review, I’ll be looking at Firewalla Blue. Let’s start with some specs.

How I Use It

Once you download the app, it walks you through how to set up the device. It has a QR code you scan with your phone to sync the Firewalla with the app. You plug it into a power source and the ethernet cable goes into any open port on your router. The entire process for setting up was about 10 minutes before I started getting alerts on my phone and Apple watch.

As an IT admin, the main concern that brought me to testing Firewalla is seeing what devices had access to my network and if any rogue devices were trying to get in. While at work one day, I got a ding that a new device had signed into my home network and it was nice to open the app, see who/what it was, and decide if I wanted to continue access to that device.

When you get an alert that someone is on, say, a gaming website, you get all the information from the name of the device to the vendor, IP address, MAC address, and destination info, as well as the IP of the site they are playing on. It also shows you the last so many hours of transferred data between the two. Personally, some of the information was gibberish to me. The name of the website or gaming site was not always so easy to decipher like YouTube. It gave a more complicated name to the site, which could lead to you thinking something is wrong when it isn’t.

I saw a few anomalies on my network like my laptop uploading data to Western Digital, but then I realized that was my back-up software performing a normal operation, so I muted it.

I’m trying to fine-tune the alerts because between the time I set it up and when I went to bed, I had over thirteen alerts just on my son’s computer alone.

Teaching Your Kids About FIrewalls and the Work Environment

That isn’t the only reason I decided to test this out, though. The second is to teach my son about the real-world when it comes to his internet usage.

Now before you go jumping down my throat, I’d like to point out that in a real-world scenario (like the one I work in on a daily basis) most companies have a firewall with rules, alerts, and consequences for improper internet usage. Unlike the Disney Circle that is more of a helicopter device that you will not see in a real-world work environment, Firewalla is a consumer-friendly version of a firewall you would see in an office environment. I’m not helicoptering my son. I’m preparing him for the real world. Let’s move on.

My son goes to a public virtual school. That means he is in the public school system but all of his classes are online. This is great in many ways, but since I work in an office and not from home, it’s hard to keep up with what he is doing at home. I can remote into the computer from work, sure, but he’s actually been fast enough in the past to almost hide that he wasn’t doing school work from me (much like my co-workers when I walk past their desks). Firewalla alerts me now every time he gets on his videos and games, and I can decide if I want to block the site because it’s during school hours or allow him to continue on with what he is doing and just have a discussion about it with him later.

I fine-tuned the alerts and set up a rule that my son could not access his gaming sites between certain hours. This keeps my watch from blowing up with alerts and I know that he has no outlet to avoid his school work. This is no different than me setting up rules in our firewall at work telling people they cannot be on social media during work hours.

Speaking of rules, another feature I like is the ability to set rules for certain devices and give them access privileges. I can block all game sites, for instance, from my son’s PC during certain hours or, with the flip of a switch, I can block all social media on all devices for a set time. The downside to this that I’ve found so far is that Firewalla doesn’t stop the device user from using the app to access social media, just the website.

Firewalla is small but mighty. It helps me keep an eye on the devices on my network and what their data usage is. If I see questionable usage, I can block it with the push of a button. If I know my family needs to be off their devices during, say, dinner, I can block their devices from the network for a set period of time. A useful tool if you want to have some dinner conversation that isn’t done via text message.

Firewalla Blue retails for $179 and has a little more punch than it’s little brother Firewalla Red, which retails for $99. If you are a basic home user, save your money and buy the Red flavor. Red is more for your basic home user and offers most of the same things as Blue with a little less speed and memory. Both are available on Firewalla’s website and Amazon.

Scottevest’s Ultimate Microfleece Hoodie Is Like a Warm Hug