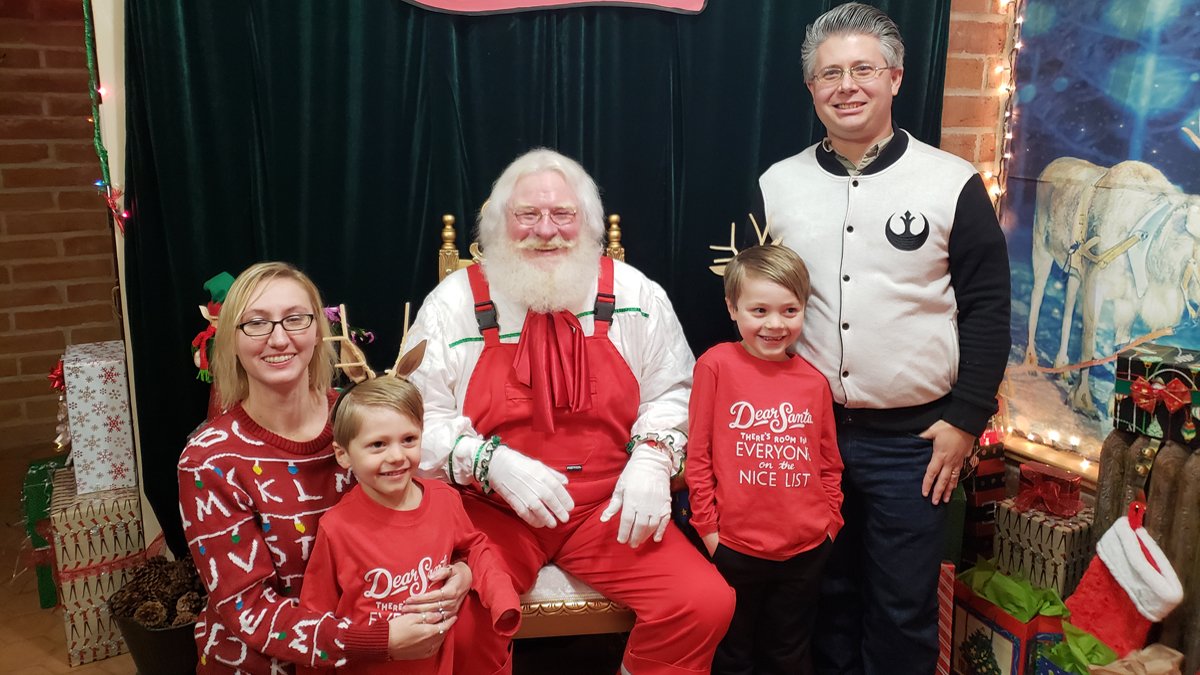 A, our firstborn, has his 9th birthday fast approaching, and it’s bringing a lot of feelings for the grown-ups. At nine, he’s halfway to being a legal adult and is now old enough to be described more like a tween than as a young child. Since we lost the pregnancy that was supposed to be our third and final kid and discovered I have a medical condition that makes us not want to pursue having a third kid anymore, there’s an extra layer of bittersweet involved. A is growing up, his younger brother W is not far behind, and there are lots of kid stages that when W passes right behind A, we find ourselves closing that childhood chapter in our family. Lately, it seems like we’ve been closing more and more chapters.

Santa is one of those milestones that we’re on verge of hitting. At this point, A is still a believer, but I’m well aware that, given his age, this is likely going to be his last real “Santa Year” and that by next Christmas, he’ll know the truth and be helping me keep the magic going for W. He already has had classmates that stopped believing last year. I imagine fewer believe this year, and next year I imagine his class will be full of non-believers. Part of me feels like we just barely started the Santa business, and now two blinks later and he’s about to age out with W trailing behind by a few years that will likely go just as fast.

I credit a few things for helping us keep the magic going. First off, A is imaginative enough as a kid I think he likes the idea of Santa enough that he doesn’t want to challenge it. For many years, I was the same way. The Santa thing was working for me, so for quite some time, I didn’t feel there was a real benefit for being a non-believer like a number of my classmates. It also can’t hurt that I’ve been a particularly careful Santa. Notes are never handwritten where a kid might recognize Mom or Dad’s writing. All of those communications are done via printed letter with a fun Christmas themed font. The holiday paper is kept where the kids don’t access it and the Santa paper is a specific roll never used for anything else. (I eventually junior Nancy Drewed the truth as a kid when I was about A’s age via a wrapping paper connection.) The Santa we visit every year is someone I’ve known from the time in my life before the kids were born and I was involved with the SCA. As part of his routine, I fill out an “Updated Address Card” that actually includes things like kid’s name and age, what they’ve done well this year, and what they should work on. While we wait in line and the card is taken back by a helpful elf to the back and Santa is fed the information via some sort of earpiece headset. The result is that this Santa really does seem to know everything. Looking at it now, I realize that I really did pitch this Santa thing in a way to get my kids to solidly believe.

It’s been fun. I love the excitement of the special Santa gift on Christmas morning. I love how their Santa remembers an upcoming birthday or gently asks them to work on a particular behavior while praising what they’ve been awesome at doing. I love how invested they are in Elfie and his shenanigans every year. Kids are only kids for so long, so seeing them believe in a little holiday magic is extra special.

A is excited for Elfie to return soon and hopes he brings friends with him again. (Spoiler Alert: Elfie got married over the summer and they adopted another pet, so we’re adding a new Elf and a “Rescue Fox” to the crew.) Next year, A may actually be helping me set out the Elf and come up with fun ideas for surprising W.

I’m a little sad that this is probably our last year with Santa magic for A. If he doesn’t actually directly question the Santa and Elf thing by next year, it’s probably time to let him know that Santa magic is really created by lots of people who love him, and that now that he’s older, it’s time for him to take on creating some of that Santa magic himself. So this year, I’m going to try to take in every last minute of the fun. Even when it’s a cold day and the Santa line has been long, even when I’m exhausted and need to find another fun thing for the Elf Crew to be up to when I just want to go to bed. Next year A will be deputized to create some Santa magic, but this year he gets to believe just a little bit longer.