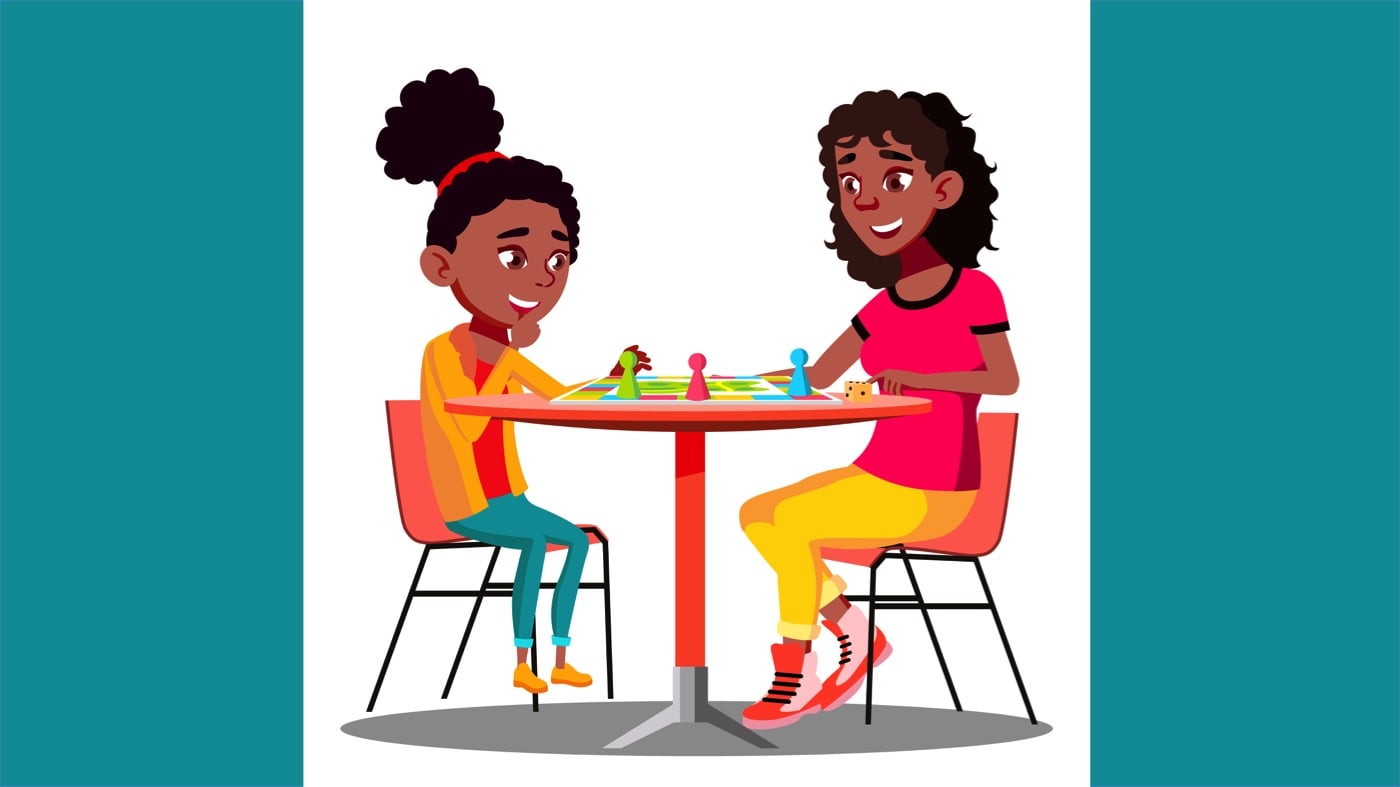 My fellow GeekMom Evil Genius Mum recently put together a panel at PAX to discuss games and mental health in children. She believes games can help our children to be mentally healthy and can have a positive impact in times of illness. I asked her several questions about this line of thought and specific games she recommends:

GeekMom Rebecca Angel:
Although games, especially RPGs and video games, have been targeted as detrimental to young people’s mental health, many parents can see the positive side of gaming. Your son has been using games to deal with chronic pain. Please tell me more about that experience.

Evil Genius Mum:
We have access to a range of games, for entertainment and also for therapy. Starting with computer games, our son has been given guidance from his therapist to use games as a way of distracting his brain from the pain while keeping the brain active. However, there is a very specific list of requirements for a computer game to work in this manner. It must be cognitively engaging (with puzzles or strategy or storylines), it must not be overstimulating in sensory experience (eg. too many flashy lights or sudden movements), and it must have regular “save points” or closures so that you can set a limit on your play and be able to stop there.

The best example of this is The Legend of Zelda: Breath of the Wild. It has an open plan storyline so you can explore in your way and relatively peacefully, it has plenty of puzzles and challenges with shrines and side-quests, and it has many opportunities to set your own limits to playtime—eg. Today I will explore this section and complete two shrines then stop. The latest game, Link’s Awakening, is also beneficial in the same way, though I don’t know if it has the same open plan for the game.

Socially, our son has also been playing Minecraft with friends on a locked server. This has similar benefits to BotW and it also allows him to socialize with friends online when he has been too sick to attend school. We find this game works well on weekends when it doesn’t bother everyone’s homework requirements and the parents are available to set the limits on gameplay.

For RPGs, our son is very much into D&D. We have not played as much lately, due to time restraints, but our son benefits from the preliminary preparations and story building. In fact, one of his school assessments for Visual Arts required him to create a creature of his own design and a backstory to go with it. Thanks to D&D, this was an easy piece for him!

Board games, in general, have also worked as good pain management. He loves the strategy with the games and enjoys having the moments to sit and focus on something else—like a distraction that is still engaging his brain. We are also stocking up on more 1 or 2 player games, to explain that opportunity.

Rebecca:
What’s the difference between passive and active entertainment in terms of coping with tough times?

Evil Genius Mum:
For me, you can sum it up with computer games: passive is watching a YouTube video on speedrunning a certain game while active entertainment is playing the game and putting it in to practice yourself. In absolute honesty, passive entertainment can be just as useful for gameplay as the playing itself. However, it should not be the majority of it. It’s great to watch a few YouTube or Twitch videos and see how others play. However, if you are not putting that into action yourself then you are not gaining any skills.

Passive entertainment can also be beneficial for those who need to step away from the stress/pressure of performance or participation with the ability to be entertained in a safe environment.

Rebecca:
Having a reward system is one of the ways games and mental health combine, especially for teens who are unable to do much physically and mentally. Why do you think that is?

Evil Genius Mum:
Human psychology loves reward systems. We love the “ping” of a machine that says well done. One of the reasons a game with many “save points” is so good for us is because it gives us the opportunity to complete a goal and stop. The sense of completion is critical here because that’s the “reward.” Crossing off your to-do, handing in an assignment, any task that needs to be completed is good for our psyche. Games are a safe and familiar environment that provides that same reward system—finishing this level, defeating this boss, completing a side quest. For teens going through chronic health issues (physical or mental), the real world already feels unpredictable, as if it is out to get them. Often the situation can be so far out of their control, nothing they do is “right” or “helping.” Computer games allow them a small slice of the world where things CAN be completed successfully. The reward from that is a boost for their self-esteem and their sense of worth, which all helps towards health rehabilitation.

Rebecca:
Social connection is often recommended for teens to stay mentally fit. How do games and mental health connect for this, both table-top and video?

Evil Genius Mum:
We’re pretty lucky to have a great network of friends already into board games and computer games.

For computer games, our son plays League of Legends and Minecraft Realms on closed servers with set friends. With his pain, he can sometimes miss 4 out of 5 days of school in a week. By the time he reaches the weekend, he feels detached from his friends and starts to worry about how much extra effort it will take to catch up on their news. I have seen an hour of Minecraft Realms be filled mostly with a conversation about what happened during a sports game at school during the week. And it was perfect because the friends loved sharing the story with our son and our son loved his friends taking the time to include him. Sure, he felt a little sad about missing the actual game, but he felt boosted by his friends taking the time to tell him about it rather than “oh, we’ll tell you when you’re back at school.” The online gaming experience opened up a channel of communication while playing with mates.

For board games, we have had a few game days at our place. We also have access to our local Good Games store, which offers weekly events for a variety of board games and RPGs to encourage social activities with likeminded people. We haven’t attended as many this year, but they are great inspiration for our own at home.

Rebecca:
I’ve never seen a complaint about board or card games, but I remember when role-playing games were given a bad rap in the ’80s, especially connected to the mental health of teens. Since then, all the “data” has been debunked, and even the courts agreed it was unverifiable slander against those gaming companies like Dungeons & Dragons. Yet, the reputation is still there decades later. There have been several studies that show teens that play RPGs are less likely to have social problems and mental health issues than non-gamers. Although RPGs are becoming more socially acceptable, they are still on the fringe of the gaming world. Why do you think a bad reputation persists?

Evil Genius Mum:
A lot of it comes from fear. Some people “look in” on an RPG and see the role-playing as being an extension of the person playing. For example, your character just killed another character in the game so YOU MUST WANT TO KILL PEOPLE TOO!!! OH, THE HUMANITY!!! Reminds me of a recent Voltron episode where the Paladins are playing a D&D parody game and Shiro keeps playing a paladin—just like him. All of the other players are trying to explain to him about fantasy games, but he looks at it in the same way many non-players do.

Rebecca:
Video games have numerous studies on all sides of the debate about whether or not they help teens achieve more or turn them into killers. You have mentioned that it’s what games are played and how they are used that makes all the difference. Would you elaborate on that?

Evil Genius Mum:
Our personal psychology is PERSONAL. Not everyone responds in the same way. GeekDad Rory recently wrote an post about how he uses Skyrim to manage his PTSD. During our panel at PAX Aust, our panel therapist explained about controlled exposure as part of therapy, and how games can work in these situations (like Rory’s) but they need to be managed person to person. Our son can use BotW and Minecraft easily but he had to stop playing Subnautica because he realized he was instinctively changing his breathing during the “diving scenes.” Our son is trained and experienced in Open Water SCUBA diving, so it usually wouldn’t be a problem. Except that it was putting a little added strain on his abdomen (where he suffers the chronic pain) and thus was not helping.

There are certain games that are questionable for their violence and relatability. When using games as escapism from your chronic pain issues, it is easy to detach from real-life moral obligations and develop a psychological relationship with other characters. One of our panelists used Fire Emblem as an example, where she needed a friend to warn her about which “game friends” would be killed off if she chose different storylines to follow. Another friend said that she was concerned about how she was now “assessing” her real-life friends based on the way she analyzed the characters in Fire Emblem. This is not saying it is a bad game (it’s actually very good) but it is pointing out the different ways individuals will respond to different stimuli.

Rebecca:
Do you have a list of recommended games to help teens and mental fitness?

Evil Genius Mum:
Computer games: The Legend of Zelda: Breath of the Wild, Portal, Fire Emblem :Three Houses (so long as they have someone around to enforce save points). League of Legends and Minecraft are good for social but don’t offer enough in the storytelling long-term.

Board games: Organize a game day/night and include some co-operative games. Pandemic is great. For a lighter competitive fun, Ticket to Ride or any Munchkin variation (great for a little RPG as well). For solo, Quadrillion is helpful for breaks between relapses, or for the musically inclined, Oom-Pah! out on Kickstarter soon (my review is coming up).

Thank you so much for taking the time to answer my questions about games and mental health.

Search GeekMom for more game recommendations, including my own post about why gaming is important family time.

board PNG Designed by pikepicture from Pngtree.com