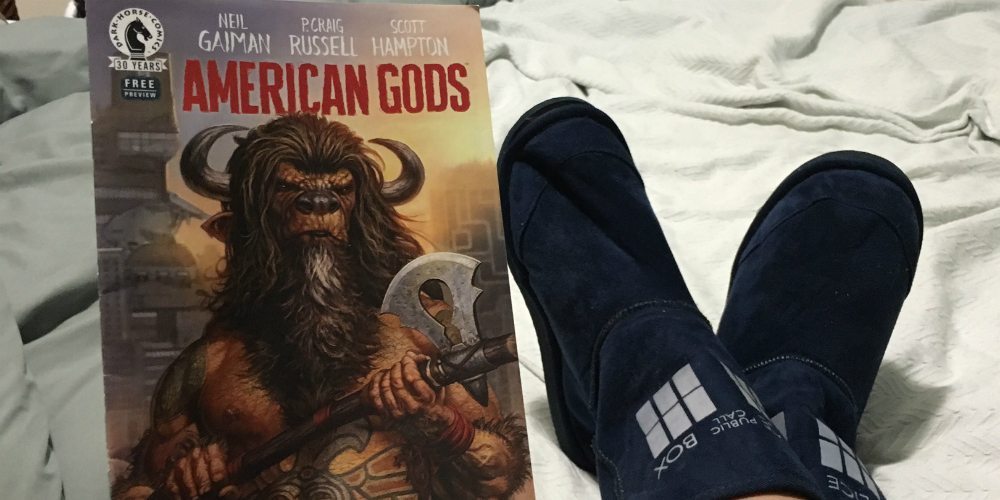 Right this minute, I am in desperate need of comfort. You know that feeling when you’re sick and you just want to curl up with a good read, a hot cocoa, and the best pair of TARDIS ugg boots you could ever whistle for. Well, the Gods of old must be smiling on me because EG Dad has brought me a cuppa, the spawnlings have brought me the slippers, and Dark Comics have given me an interview with P. Craig Russell—script writer and layout designer for the latest adaptation of American Gods.

It looks like a good day for me after all.

After scoring a preview copy of American Gods, and totally falling in love with it, I was invited to throw a few questions at Russell. Find out what he has in store for us with the graphic novels and learn a little about what happens inside the brain behind the script and layout.

Just a little teaser: It is soooooooo good to hear a writer be as excited about their project as the fans. All we geeks want is someone who will respect the source material as much as we do.

Rest assured, readers. Mr P. Craig Russell and his team are perfect for the job.

Evil Genius Mum:
You have a noted trend for some amazing adaptations; War of the Worlds, Magic Flute, Jungle Book. What was it about American Gods that had you thinking “Yes! I want to share this”?
Russell:
Very simply, it’s a complex, exciting, well-told story full of delightfully drawn (in the literary sense) characters. There is nothing better than to have that as your starting point.
Evil Genius Mum:
Having worked on previous Gaiman novels (like The Graveyard, also with Scott Hampton), what was it like slipping into this skin again?
Russell:
When Neil gave me his script for Sandman #50 some 25 years ago, I had no idea it would lead to a career-long collaboration. I’d like to say that ‘slipping into this skin’ has become a comfortable and familiar experience, but that would ignore the fresh set of challenges each new project brings. Approaching each new chapter or even single page of prose is an intensely ‘itchy’ experience that’s not satisfied until I solve the storytelling crossover problems from prose to visuals and I heave a very satisfied sigh of relief.
Evil Genius Mum:
Knowing how much Scott likes facial expressions and storytelling through scene-setting, how does that impact your scripting and layout?
Russell:
It doesn’t matter to me. Whether I’m doing layouts for myself or for another artist, I’m only thinking about the best way to tell the story. Having said that, I lobbied vigorously for Scott Hampton as the finishing artist. And though it’s true that I’m not thinking of the artist when I do the script and layouts, I do think about them before I do the script and layouts. For example, I knew Colleen Doran is particularly good at historical costumes and so suggested her for the “Coming to America” chapter set in the 18th Century. But my storytelling approach remains the same no matter who the artist is.
Evil Genius Mum:
Which character are you most excited to bring to the graphic novel?
Russell:
So far it’s Zorya Polunochnaya. Ironically it was in part because I had previously seen Scott Hampton artwork that handled such a moonlit dreamy character and so looked forward to his handling of the character. Last week he sent me jpegs of her scene and I was not disappointed… to make an understatement.

Excuse me for a moment while I contact my local comic book store and pre-order all the chapters of American Gods. I love both Zoryas!

American Gods: Shadows #1 is available from March 15 and is ongoing. Shadows is the first of three story arcs. Go and chat with your local comic book shop experts for more details.