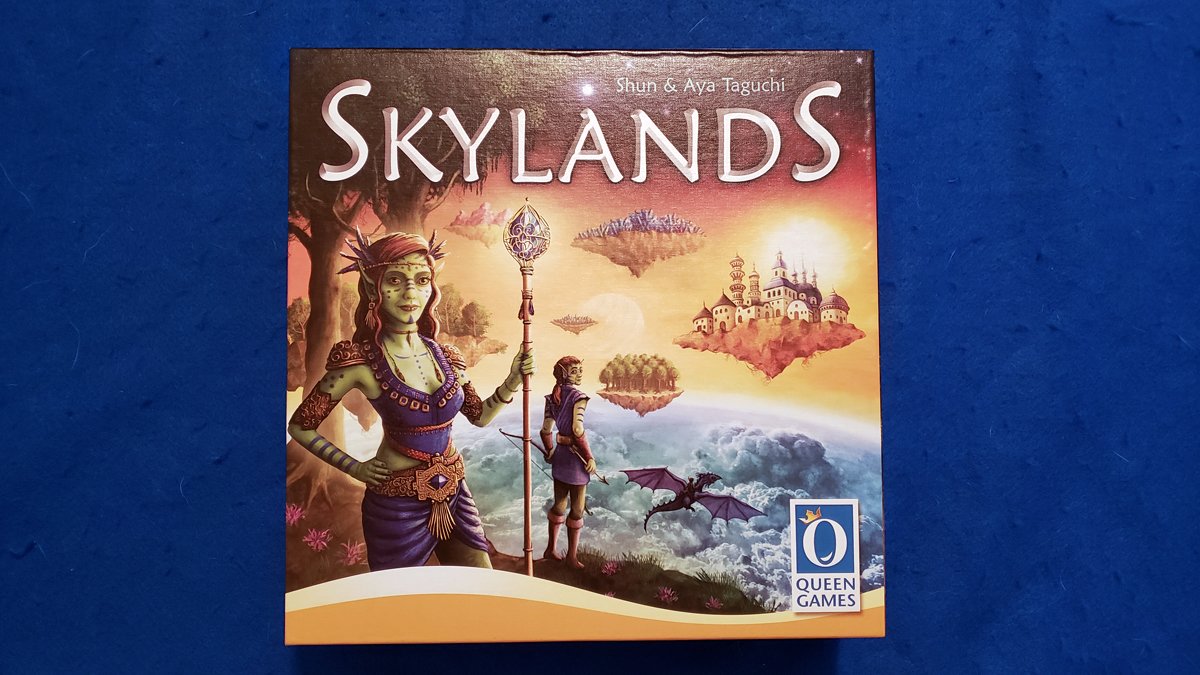 There can be a challenge in finding games designed for grown-ups that kids can also play. Our older child, A, is approaching nine and loves to play with the grown-ups so it’s nice when we can find a game he can play with us that we also might be more inclined to play with our friends. Luckily, there are games like Skylands from Queen Games that do manage to fit those requirements. I was lucky enough to receive a copy in exchange for a review.

Skylands is a tile-laying game that my husband called “Carcassonne if you only had cities and no roads, farmers, or churches.” It’s designed for 2-4 players ages 8+ and takes about 30 minutes to play. It has a MSRP of $59.99.

Overall, I feel like the components are the quality you would expect from a game in the $60 range. The Player Tokens and Inhabitants are actually made of wood. All of the other boards, tokens, and tiles are made of a pretty sturdy cardboard that should take quite a bit of play without any issues. The artwork is gorgeous and makes you feel like time and care were really put into the design of the game. I’m particularly fond of the Action Book artwork. There is a scoring pad to help organize final scores. You could probably do this on your own if you have to, but I think the pad is nice to have. You may want to make a copy of the page if you think you’ll play the game enough to run out, but there’s a good number of scoring sheets included.

How to Play Skylands

Skylands is one of those games that might intimidate a casual gamer when they look at the sheer amount of pieces involved. One you get the game set up, the play mechanic is actually pretty straighforward and the rules include a setup variation good for your first time playing or when you introduce new players. Overall, I think it’s best described as a game aimed at adults that you can let your kid as young as eight play, but I don’t think I’d let a group of eight-year-olds take it on their own unless they’re all decently experienced gamers.

The goal of Skylands is to win the most points of any player by building complete islands, adding inhabitants to your islands, and earning Victory Point by powering cities.

Setup is the part that looks the most intimidating as you find yourself sorting out a lot of tiles. The instruction book has a great visual diagram to help out and, as long as you follow it, you should be fine. For our review, we played a three-player first game non-tactical variation.

Players follow these steps to set up the game: 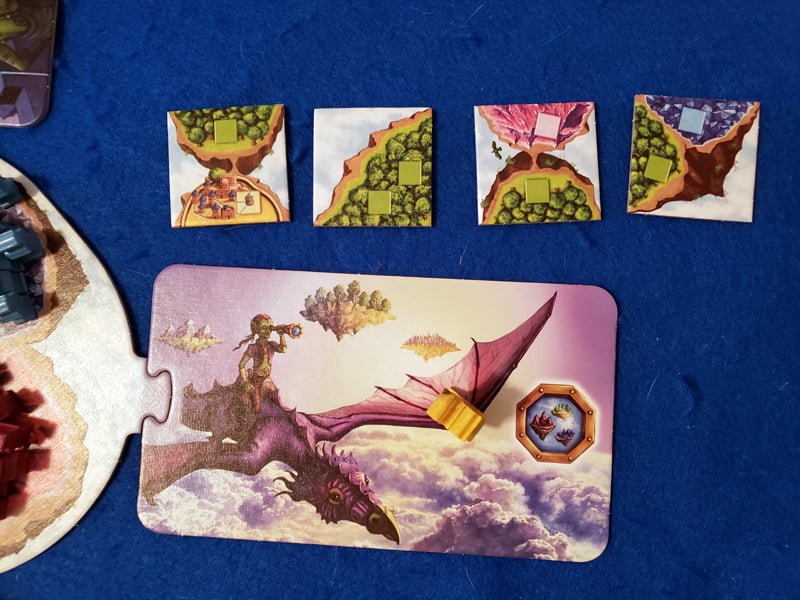 For players wanting a challenge, they can play a Tactical Variant of the game. In this one, the Player Board is placed on a blank side and each player gets one Starting Island Tile (double sides island tiles) and 3 Island Tiles. They keep two of these to start building their city. Unused tiles go to a discard pile.

Tiles have rules very similar to Carcassonne when it comes to placing:

The Action Boards are as follows:

The Active Player reveals as many Island Tiles as there are plus one and gets first pick. Each player in clockwise order may choose from the remaining tiles or pass on them.

Active Player Bonus: Once everyone has had a chance to take or pass, the Active player may take a second tile or pass. Unclaimed Island Tiles go to the discard pile.

Starting with the Active Player, each player chooses one complete island to fill with Inhabitants of a matching color. This can only be done with wood (green), crystal (blue), or pink (mountain) islands. If there are not enough Inhabitants left on the Supply Board, the player can only take what is available.

Starting with the Active Player, each player may use Inhabitants to buy 1 Special Island Tile. The upper left corner shows how many Inhabitants of what color are required to purchase the tile. The white Inhabitants can be any color of the player’s choice. The Inhabitants used for purchasing are returned to the Supply Board.

Active Player Bonus: Active Player gets to keep the inhabitant used as the white Inhabitant instead of returning them to the Supply Board.

Depending on game type you are playing, your Special Island Tile may have an effect:

Starting with the Active Player, each player can move their inhabitants from a completed crystal island (blue) to a completed city island (yellow). The player receives one Victory Point for each inhabitant on the city island and then those Inhabitants are returned to the Supply Board. If the Victory Points run out, players record all points that would have been rewarded and the game goes into final scoring.

The game ends and goes into final scoring when one player only has one or less empty tile space on their board or when the Victory Point pile has been depleted.

Players get scored in the following manner:

The player with the most points wins.

Why You Should Play Skylands

If your a fan of tile-laying games that you can play with kids as young as eight, Skylands is a game you should check out. The recommended age of eight is probably pretty fair within certain limits. The game mechanic is easy enough for an eight-year-old, especially if they’ve played other tile-laying games, but I don’t know that our eight-year-old could play the game by himself with other eight-year-olds who have never played it before. So if you treat it as a game for grown-ups your kid can join in on, you’ll probably be fine. I probably would not bring in players too much younger than eight unless they have a lot of experience with tile-placing games.

The amount of components, and their quality, including the amazing artwork is exactly what I would expect out of a game in its price range. I think it’s been made to be played quite a bit.

The gameplay mechanic itself is simple enough, but doesn’t sacrifice a sense of strategy. With numerous ways to earn points, there’s more than one approach a player can take. My husband racked up a bunch of Victory Points in the beginning from having a few crystal islands, while I struggled to get crystal islands completed until later. There’s also a certain amount of luck involved. Twice, I chose to “Discover Island” only to turn up with nothing I needed. Players also have to be careful in building their islands up because they can back themselves into an awkward situation where they need specific tiles to complete their islands that are hard to find. I think it is a game you might be able to pull a more casual gamer into, but experienced gamers will still enjoy it. The Tactical Variation also brings in a nice challenge for more experiences gamers that helps to extend the replayability of the game. I will note that our first round did take more than thirty minutes to play, but there was some setting up at play as well as rule learning. In the future, I’m thinking a game is likely to run from 30-45 minutes.

The game has a MSRP of $59.99 which I think is fair for a game with good replayability, two modes to play, the amount and quality of the components, and the ability to play it with kids or casual gamers. It can be purchased from third-party sellers via Amazon for as low at $47.99.

Let’s Talk About the Undead