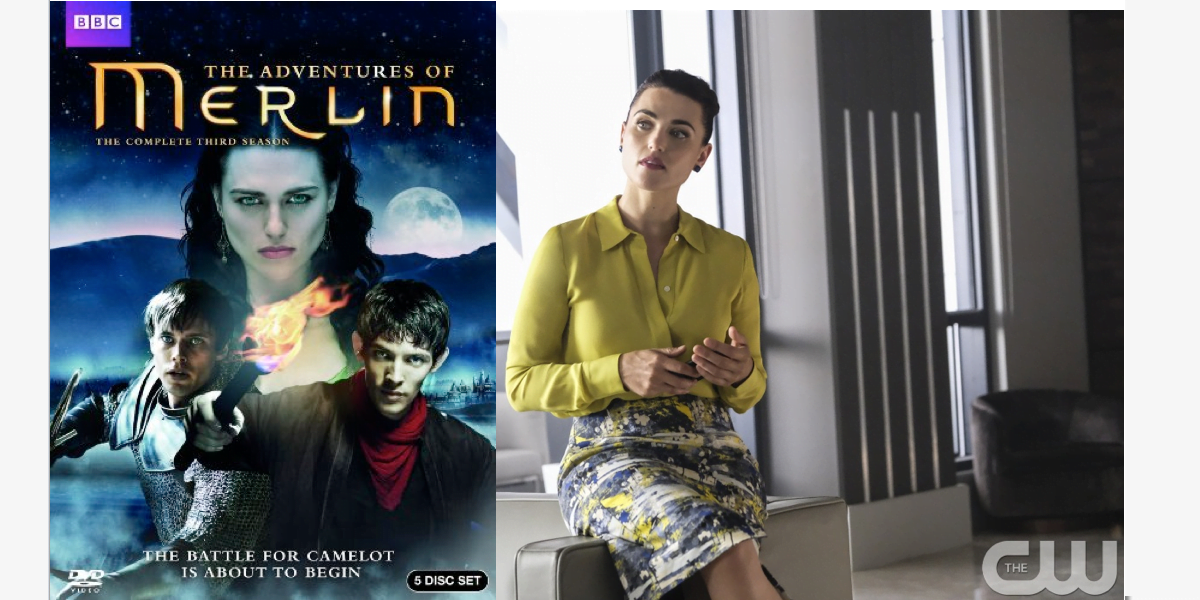 My 13-year-old loves superhero shows. And I want to spend time with him. But sometimes, I want to watch something else.

Thanks to Katie McGrath, we’ve found a way to make both of us happy.

I considered watching Barry Allen run faster in fifty different ways in The Flash but–no offense to The Flash–my son has already watched that series at least twice. I didn’t feel compelled to join him as he skipped around on his third rewatch, picking only his favorite episodes and passing over any scenes that might be “boring” to him, a..k.a. those pesky relationship scenes that would allow me to connect with the threads of the complex personal relationships between characters.

I wanted something different. Arrow and many of the Marvel shows (Luke Cage, Jessica Jones, Defender) just felt too dark (as in, mostly shot at night time, which is also why I couldn’t get into Angel despite zipping right through Buffy the Vampire Slayer).

Which brought me to Supergirl.

A few years back, my husband and I had enjoyed watching Merlin, in which Katie McGrath plays Morgana. Seeing her on-screen as Lena Luthor in Supergirl brought back my fond memories of Merlin and added to my viewing of Supergirl.

After enjoying a few episodes of Supergirl, thanks to McGrath’s presence, I wondered whether the reverse might be true; would my 13-year-old be open to watching Merlin because the actress playing Lena Luthor was in that show?

Turns out, the answer was yes. Katie McGrath’s appearance opened up my 13-year-old to getting into a series he wouldn’t otherwise have ever considered.

We would watch two episodes of each show, then tried alternating to watching just one of each. At times, though, we’d switch it up and watch three episodes of one show in a row. I mostly let my son decide, secretly pleased when he chose to continue with Merlin even though it was Supergirl’s “turn.” That, after all, was how I could tell just how engaged he was in the story.

Never mind that he had already seen every episode of Supergirl already; early on he still preferred to re-watch that show.

I’ll admit, Katie McGrath wasn’t the top reason I watched Merlin originally. Even now, the banter between Prince Arthur and Merlin makes me smile. And I am definitely viewing things differently the second time around, finding myself with much more compassion toward Uther Pendragon than I could ever muster the first time around.

Originally, I mostly tolerated Uther’s character because he was portrayed by Anthony Head, whom I had just seen as Rupert Giles in seven seasons of Buffy the Vampire Slayer. And later, I watched iZombie with relish as long as Bradley James (Arthur) was around (although it admittedly took me a little time—and an internet search—to recognize him).

But this time around, I’m very attuned to the nuance that Katie McGrath brings to her portrayal of both Morgana and Lena Luthor.

Both characters must convincingly balance between good and evil, believable in both their light goodness and cunning darkness. Both characters face struggles that reveal, at least to the audience, where her moral compass is pointed.

Indeed, McGrath seems to have landed two wonderfully complex roles that allowed her to showcase her skills in successfully balancing on that tightrope. And while this time around, I may find the directing for Merlin somewhat clunky (my kids have wondered aloud why nobody bothered to look at Morgana during any of the scenes where she flashes a snarling glare at Uther Pendragon or smiles deviously while those around her look dismayed or shocked), perhaps that speaks more to just how much television we as a family watch that these “subtle” directions jump out at us.

So I’ll keep looking for crossovers, which seem the best way to encourage my kids to explore shows they wouldn’t have otherwise considered.

So thank you, Katie McGrath.