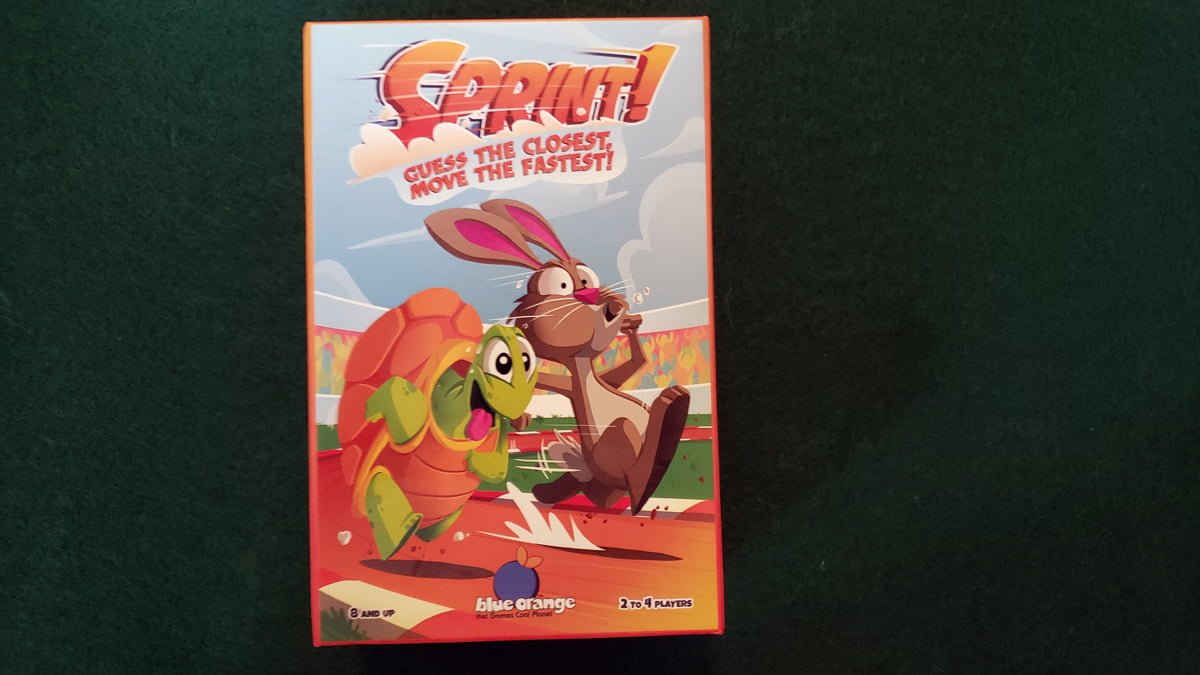 Blue Orange Games has a number of new releases for 2019, and I’ve gotten to review complimentary copies of Tumble Maze and Oh My Gold! already. A, our third-grader, and I were particularly impressed with the on the go game style of Oh My Gold! and look forward to taking it around with us. Sprint! is a more card-based game with the same compact convenience of Oh My Gold!

Sprint! is a card based cooperative racing game for 2-4 players ages 8+ and takes about 10 minutes to play with an MSRP of only $9.99. The game is a take on the classic Tortoise and the Hare story (Turtle and Rabbit in the game). As a team, the players are trying to help the Turtle beat the Rabbit in a race.

The Game Board Tiles are made of a sturdier cardboard. The Race and Objective Cards are a little thinner, though. Fine for actually playing the game, but I wouldn’t turn them over to younger, rougher hands. Both Pawns have decent sturdiness to them as well. Like with Oh My Gold!, one of my favorite features is the box. It makes great use of compact space and has a magnetic flap that secures the box. You can grab the box in one hand, so it’s small enough to throw in backpacks or purses to take along as entertainment for the kids.

How to Play Sprint!

Setup for Sprint! is nice and quick, which I find to be a welcome feature in games meant to be more on the go. The 6 Game Board tiles form a race track with three cards on top and three on the bottom. They are conveniently numbered to help speed up the process. Once the Game Board is set up, the Race Cards and Objective Cards should be shuffled and placed into their own separate piles. Then the Turtle and Rabbit Pawns are placed on the Starting Line. You are ready to begin playing.

Gameplay is quick and easy to teach to kids. The youngest player goes first and play then rotates through the players until the game end. Each player turn is made up of two parts: the Turtle turn and the Rabbit Turn.

For the Turtle’s turn, a player draws the top card from the Objective Card Deck and sets it down. The number on that card determines how many cards the player must try to pull from the Race Card deck in one go. Pulling the cards is tricky, it must be done in one quick action without trying to count, which is the one reason why players under the recommended age might struggle to play the game. Count the cards once you pull them and the difference between the number the player pulled and the number on the first card determines how many spaces the Turtle Pawn moves.

Take the used cards and tuck them back under the Objective Card Deck.

For the Rabbit’s turn, the player draws from the Race Deck. The following can happen as a result of the card drawn:

Once a Race Card is used it can be placed at the bottom of the deck.

Why You Should Play Sprint!

Sprint! is a quick, fun family game that is a great option for on the go entertainment that doesn’t require a charger. The game is designed to travel well, and the pieces are overall sturdy enough for the targeted age group. Set up is extremely fast and with play time being around 10 minutes, it’s easy to either fit in a quick game or play multiple rounds, which means your kids will want to keep playing it.

The cooperative nature is a nice aspect to the game and has been known to keep playtime a little more peaceful in our house. While the drawing of the Rabbit’s Race Cards are luck based, the Turtle requires some skill in lifting the correct number of cards. That fine motor skill and guesstimating may make it harder for kids under the recommended minimum age of eight to master. If you want to try it out with a younger kid, you may want to have a more patient adult test it with them so that a annoyed sibling doesn’t blame a loss on a younger sibling.

With the MSRP at just $9.99, the game is super affordable and easy to justify buying for your own family or as a gift. You can use the Blue Orange Store Locator to find the nearest store that carries Blue Orange Games in your area or check out Amazon for other buying options.