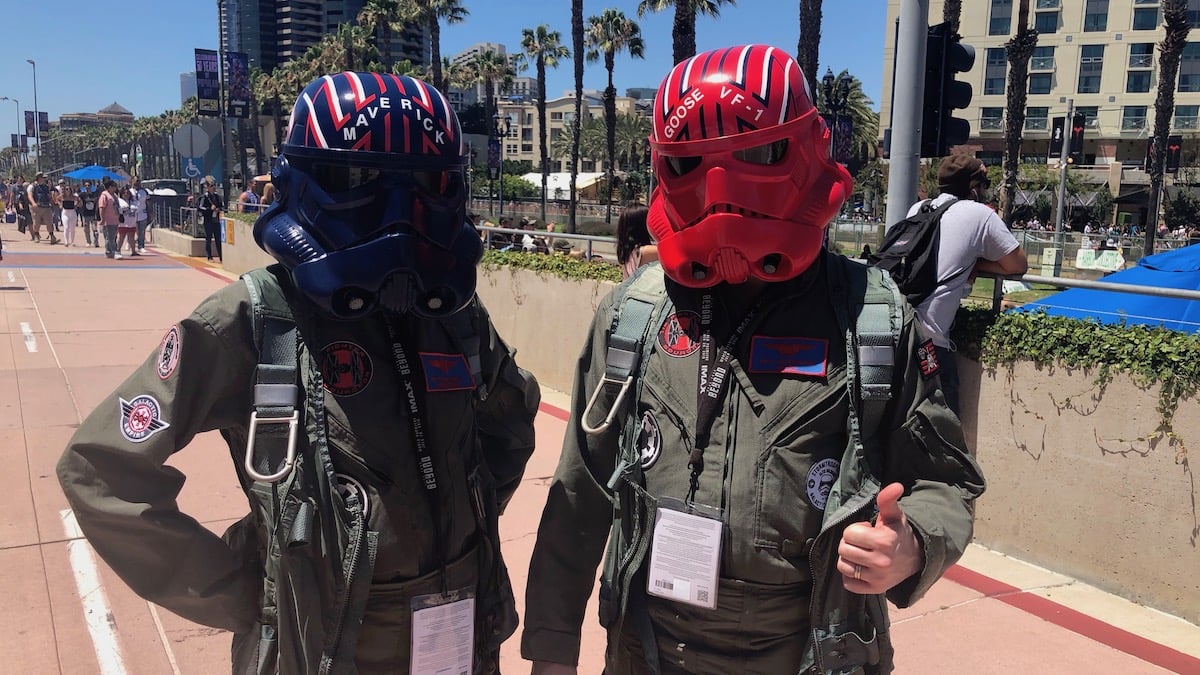 Day 3 of San Diego Comic Con definitely ended up my “busy day.” On Saturday I had numerous invitations to press events I was trying to juggle, and due to my FOMO-ish tendencies, I did my best to include as much as I could. By the end of Day 3, I was very grateful that I had a flight home the following day.

There was quite a bit I didn’t get to see and do–missing the Jean-Luc Picard museum in the Gaslamp Quarter is at the top of my list of things I wish I had more time to see–but thanks to the press access I did have, I was able to really maximize my first SDCC quite well. Like with Days 1 and 2, this will be the summary of my day, with more posts coming later, particularly addressing the amazing experience I had with CBS All Access celebrating the Star Trek Universe!

Bright and early morning as I have an 8am call to take a look through the @nbc events at the Hard Rock Hotel across from the convention center. Particularly excited to see the #Brooklyn99 activation, which isn't visible until you go inside. (I hear it's an escape room!) @geekmomblog @comic_con #sdcc2019

Just by walking into the Superstore Pop Up at the Hard Rock Hotel, you will earn Employee of the Month! @nbc @nbcsuperstore @comic_con @geekmomblog #superstore #sdcc2019

I had my second celebrity encounter during the Brooklyn Nine-Nine escape room event. We were divided into three teams and the team who finished first was deemed the “winner”: while all participants received collectible SDCC exclusive pins after finishing the event, the winning team’s pin was different (and way more cool!) I was put on a team with actor Xolo Maridueña, his sister, and his father. Mr. Maridueña is at SDCC promoting the YouTube Premium series, Cobra Kai, a continuation of the Karate Kid relationship between Daniel LaRusso and Johnny Lawrence. He stars as Miguel Diaz, one of Johnny Lawrence’s students in the newly re-opened Cobra Kai dojo. They were the sweetest family; Xolo’s 11 year old sister was definitely our team’s ringer. I know we couldn’t have won the escape room without her.

Red team WON! (Of course we did!). You might recognize actor Xolo Maridueña from the YouTube series Cobra Kai on our team. His sweet little sister was definitely our ringer! #brooklyn99 @nbc @geekmomblog @comic_con @xolo_mariduena

After visiting the NBC Comedy Zone I decided to check the feasibility of getting into the 6000-person+ Hall H for the Star Trek Universe panel. This was where CBS was going to be making some big announcements about their two upcoming Star Trek series, Picard and the animated Lower Decks. I had some sources telling me that without special press access, thinking about attending just 90 minutes before any Hall H event simply wasn’t going to happen.

So instead I visited the exhibit hall to try my hand at the Star Trek Universe “fan experience”, which included peeks at props from the upcoming series Picard, as well as an augmented reality transporter experience.

I changed into my red Star Trek: TOS dress and headed on over. As I had dealt with many times the previous day with other events I wanted to see, the line for the augmented reality experience was (a) spread out in batches throughout the exhibit hall and (b) was “capped”. On a whim, I checked to see if I had made the cut for the press credentials into the Star Trek experiences (I had applied for it a couple weeks prior but hadn’t received confirmation); alas, I had not.

One of the line managers with the CBS All Access booth seemingly took pity on me, since I was standing there with a disappointed face in my red dress. He allowed me into the already-capped line, to the cheers of others in the line, since I was already dressed for the occasion.

This has been the story of my life all weekend. Lines will get "capped" for retail purchases and fan experiences in the exhibit hall due to fire safety considerations. You just have to be at the right place at the right time when the lines get magically "uncapped". However, someone from @cbsallaccess must have liked my dress or something because I'm actually in one of the lines now! Getting ready to check out the USS Discovery transporter experience. I'm hoping to make it to the Jean-Luc Picard gallery next. @geekmomblog @comic_con #sdcc2019 #startrek #startrekdiscovery #startrekpicard @startrekcbs #sdccprotip

Two hours, fifteen minutes. That’s how long the line was for the transporter, but I’d argue that it was worth it.

I'm in!!! Only a 2:15 hour wait! Stay tuned for the video of my transporter experience. @cbsallaccess @startrekcbs #startreksdcc @geekmomblog @comic_con #sdcc2019

The moment you've all been waiting for! Or not. The moment I waited 2:15 hours for! The Star Trek Universe transporter experience at SDCC! #startreksdcc @startrekcbs @cbsallaccess @geekmomblog @comic_con #sdcc2019

While I was in line for the transporter experience, someone from the CBS booth came by to tell us that fans interested in signed artifacts by the cast of Star Trek: Discovery or Star Trek: Picard would be randomly selected over the next hour or so. We would find out after we stepped out of the transporter. That caused quite a stir among us. I was hoping to get chosen, but I was also worried about whether I could make it back for the signing because I had a 1pm appointment for another event.

Well, I was randomly selected, and I managed to just squeeze in the signing event before the 1pm appointment on the SYFY Trivia Trolley. What happened next is worth a post in and of itself, so stay tuned for more!

I was randomly selected to attend the Star Trek: Discovery signing! I wasn't planning at all to do any signings but here I am! I am so incredibly excited! @geekmomblog @comic_con @startrekcbs #sdcc2019 #startreksdcc

The below Tweet is actually a thread of three Tweets. Be sure to click through and check it out.

An experience straight out of Charlie and the Chocolate Factory! I was "randomly" selected to attend the signing with cast members of Star Trek: Discovery! pic.twitter.com/YwJBzsBi9U

As awesome a time as that was, I needed to head about 2 blocks north of the convention center to the Pendry Hotel to hop aboard the SYFY Network Trivia Trolley. That was a good time! However, running at full tilt down San Diego’s Fifth Avenue in a long-sleeved Star Trek dress, high heeled boots, and all of my stuff, including a newly signed poster by the cast of Star Trek: Discovery, to get to the trolley at my reserved time was probably a sight to see!

Other Trivia Trolley guests kindly spared me from having to sit in one of the pedal seats. I was soaked in sweat as it was!

My next adventure! I'm on the SYFY Networks Trivia Trolley!! Let's see how my team does! @geekmomblog #sdcc2019

(For those keeping score, my team had also won the Brooklyn Nine-Nine escape room too! Was I instrumental in either case? Probably not…but I did help my trivia trolley team by knowing who played the character Arthur Dent in the 2005 film Hitchhikers Guide to the Galaxy.)

After picking up an inexpensive New York deli-style sandwich (read: it was enormous) at a Gaslamp Quarter icon, the Cine’ Cafe’, it was time to spend the afternoon getting to know the upcoming TBS drama series, Snowpiercer. It was really cool getting to be in the panel where they were premiering the first official trailer to the world. Within seconds of the trailer ending, my Twitter feed lit up with the public release of the trailer. Right after the panel was the Snowpiercer press conference, where we got a little more insight into adapting the 1982 graphic novel and 2013 movie into canon for the TV series. I live-tweeted the press conference via the GeekMom Twitter account.

Getting ready for @tbs's Snowpiercer panel; the series is premiering in Spring 2020. This storyline is timely as we are asking questions about adapting to climate change. Food becomes short, meaning many are reduced to eating bug protein bars: which they're giving away all weekend on the exhibit floor. They weren't bad! #snowpiercer @geekmomblog @comic_con

Greetings! It's @vollmerdp GeekMom Patricia waiting for the #Snowpiercer press conference. I plan to live tweet from the event w/ key takeaways! If you haven't seen the trailer yet (just dropped), check it out at @snowpiercertv. @tbsnetwork @comic_con #sdcc2019 #snowpiercer pic.twitter.com/XoJB9luDS5

By the end of the press conference, I was toast! I had been on the go for nearly 12 hours straight on Saturday by the time my very last event approached: a much-anticipated dinner with my fellow GeekFamily writers. I wasn’t sure I was going to make it — but I’m certainly glad I did!

Where did @GeekMomBlog and @GeekDads writers converge for an SDCC wrap dinner last night? Of course we had to try @ShakespearePub1! It fills my heart knowing that folks I'd known online for many years are just as wonderful in person. Thank you for a wonderful week, team! pic.twitter.com/SZf5j7CNse

That’s a wrap with my 3 1/2 days with San Diego Comic Con. This was my first trip, and I hope it isn’t my last. My big regret–as is the case with many things I get to do–was that I couldn’t share these great experiences with my family. My sons are currently hiking at the Philmont Scout Ranch in New Mexico this week (they’re in the middle of Itinerary 28 as I write this, for those who are familiar with the program), and have no idea the great gifts I’ll be bringing home for them.

Stay tuned to GeekMom for continue wrap-ups of our week in San Diego. I have so much more to share and I’m going to send this out and immediately cracking on my next post! TTFN!