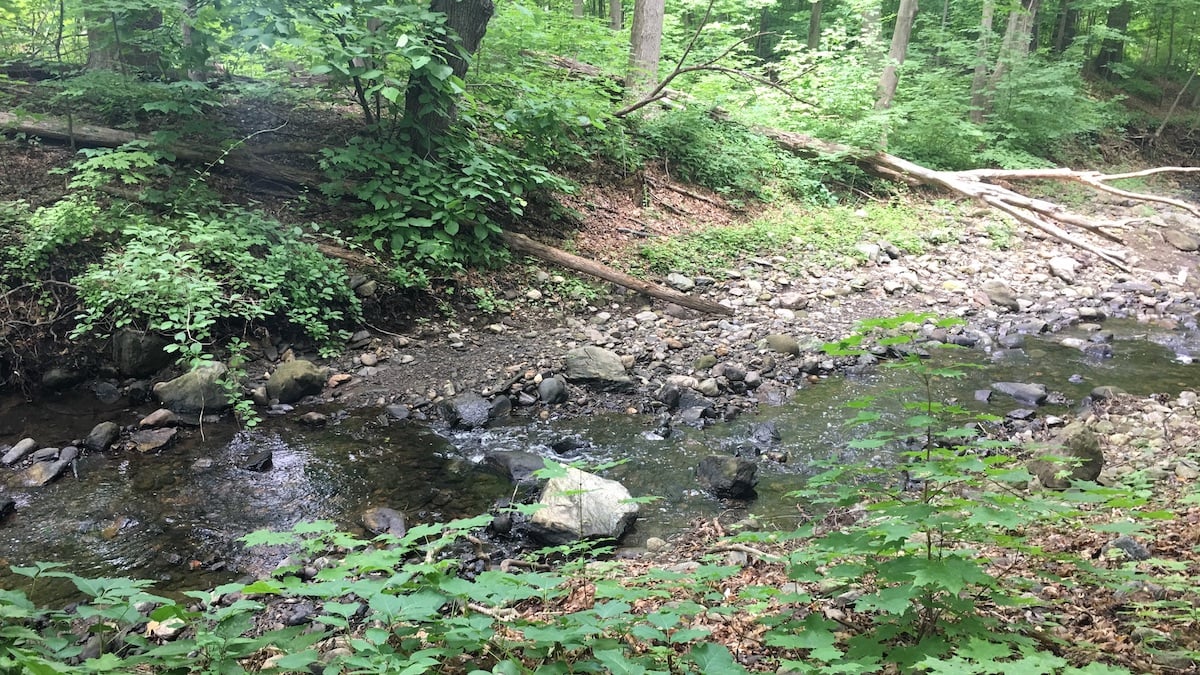 Last week I took part in a volunteer program to test the water in a local cold water fishery resource and report it to the local watershed monitoring program, as part of a program sponsored by the Massachusetts Audubon Society, the Blackstone River Coalition, the Massachusetts Environmental Trust, and more. The location of the testing was Coal Mine Brook in Worcester, MA, which is part of the Blackstone River watershed.

Cold water fisheries are water resources that are important to nature. There are several species that are only able to reproduce and live in these resources. But they are also important to humans because by monitoring these sites, we can see changes in the amounts of pollution that are happening and we can trace the causes. We can see differences in the temperatures of the water and figure out why. We can see how well drainage is working on city streets, and we can see the direct results of deforestation and make notes of issues that are occurring. These indicators can let people know of issues that will affect humans in the future if things aren’t done to stop them.

So what is a cold water fishery resource?

First of all, it has to be a body of water—most often, if not always, a stream or a river. It must have a gravelly bottom, not sandy or silty. It has to have cold water, under 68 degrees Fahrenheit or 20 degrees Celcius throughout the year, and there must be vegetation overhanging the water in the form of grasses, trees, or shrubs. The water must have low turbidity, which means there is very little matter suspended in the water (clear), and there should be high levels of oxygen dissolved in the water. All of these elements make the last couple requirements possible: there must be some macroinvertebrates living in there (critters you can see, including aquatic insects, worms, clams, crayfish, snails, and more), and reproducing fish must use it for one or more stage of their life cycle.

In order to monitor these water resources, volunteers fill out a report card, which the parent organization then turns into a larger report of all the cold water fishery and other water resources in the watershed. Last year’s report (2018) for this watershed listed 75 locations that were reported on. 25 of these resources were designated as cold water fisheries because they fit the criteria. This is a basic measure of the watershed’s health, which will eventually be passed on to humans.

The first thing we looked at when examining our site at the Coal Mine Brook was the aesthetics of the site. This is the most subjective part of the test—some people might think a site is clean, whereas others might think the tiniest amount of trash lowers its grade. Some might think the water smells, but others who have been in the field longer know it’s nothing compared to another site. Coal Mine Brook scored a fair score.

There was some litter, but not a huge amount, and it all seemed to be trash from hikers (a juice box, some food wrappers, etc) versus stuff that was actually dumped, like a car battery that was found in a different brook earlier that week. There were some invasive species of plants, especially closer to where the brook emptied into Lake Quinsigamond, which was something we needed to record. There was a smell, but it was more of an organic green smell versus actual sewage stink (which does occur in other brooks in the city).

More concerning was the amount of erosion taking place at the banks of the brook. This suggests that drainage on street level is not being regulated well. This happens often when lots of vegetation is lost because of big parking lots being built. Not only do we now have a large area where water just flows over and isn’t absorbed into the ground before it flows right into the river resource, but we’ve also lost all the trees and plants that would have absorbed that water, too. Paving is one of the worst things we can do for our waterways, but, of course, it’s necessary sometimes for human activity (though I have lots of arguments about that as well).

Losing those plants and trees is bad for other reasons, as well, which I will get to in a moment. How can you measure erosion? All along the banks of the brook, there were exposed tree roots, and you could see where the brook really flooded quite often when there was heavy rain. Finally, turbidity, or how clear the water is, is measured by sight. The water here was pretty clear. We could visually see wildlife in the water, and the bottom was clearly visible.

Next, the temperature is tested. In order for a body of water to be designated as a cold water fishery resource, the temp must be under 68 degrees F. Even if it’s measured higher than that only once in the year, a one time occurrence, that’s the grade it receives. Our measured temp was a bit warmer than we would have liked to see, but still within the limits to give it a fair grade. The water needs to be cold for the fish and other creatures to go through their life cycles, reproduce, etc.

The next steps involved actually testing the water chemically to make sure things were in balance. This process was pretty much like testing the water in your fish tank at home, only with cooler equipment. We tested for dissolved oxygen, nitrates, and phosphates.

Oxygen in the water is necessary for wildlife to prosper. In order for the brook to be a cold water fishery, it needs greater than or equal to 8 mg/l of oxygen, at a saturation percentage of 91-110% (I’m not sure where the extra 10% comes from—probably a percent error allowance, etc—I’ll update the article once I figure it out). This is measured by taking a sample of water and dripping tester chemicals into it. Then that is placed into a device that measures the saturation. Our sample scored an excellent score for dissolved oxygen, and evidence of fish, caddisfly larvae, water striders, etc, confirmed that life was thriving in this water. However, it scored a bit lower for the saturation percentage.

This process was repeated to test the water for nitrates and phosphate. Both of these things are nutrients that are good for plants in correct doses—they are used in fertilizer. But too much is not good for our waterways, the wildlife that lives in them, or the humans that swim and eventually drink the water from the reservoirs etc that the water flows into. How does nitrate and phosphate get into the water?

One major cause is, believe it or not, people not picking up dog poop off the street. This poop gets washed down the road when it rains, and the nutrients aren’t absorbed by plants like they are in the forest when other creatures poop. Remember how I mentioned the parking lots and streets earlier, and how paving and losing plants and trees are bad for the waterways? This is another reason.

All these nutrients just get washed up in a stream of waste that goes straight to the rivers, rather than being sucked up as food for trees and plants. A lot of people don’t realize how important trees are. They don’t just clean the air, they keep water and soil clean as well. And you might think that leaving one dog poop on the street isn’t a big deal, but imagine how much gets left there EVERY DAY. One little transgression might not be a big thing, but when you have hundreds, thousands of people doing it, it becomes a problem. It’s not just gross to step in or an inconvenience. It has a direct impact on the planet we live on. If we want paved surfaces, we need to balance that with other things. We can’t have everything our way all the time. We’ll pay for it later.

Pick up after your pets. OK, lecture over.

So, all in all, the water we tested at Coal Mine Brook was fairly good. I was honestly surprised=–I expected all the riverways through Worcester to be nasty. There is also an awesome hiking trail that follows right by the brook where we saw deer, a robin nest, and the abandoned and collapsed coal mine shaft. I wrote a separate article about our experience on this trail that you can check out—there’s a picture of the mother deer we saw!

I didn’t get a picture of the caddisfly larvae we saw (which are really cool, not just because of what they do, but because they are extremely intolerant of pollution—their presence means that the water is doing pretty well), but I did manage to see and grab a picture of some fish I saw when standing on some rocks in the middle of the brook.

There’s more than one fish in that picture, but since I only had my cell phone camera, I didn’t have a polarizing filter to get rid of water glare, which makes it very hard to see!

Cold water fisheries exist worldwide and can be very important indicators of how human pollution is affecting natural habitats and resources—which then cycle to affect human life. People depend on trout and other fish in these resources as food. If the food goes away, people will go hungry (even if they don’t eat the fish, larger animals that do will die, and the effects will be felt throughout the food web). Polluted water isn’t good to drink or swim in. The nitrates and phosphates in the water can cause algae blooms which close beaches in the summer. Polluted water can make people sick. So it’s important to keep an eye on these early indicators so we can fix things early enough to make a difference.

Want to learn more about cold water fisheries? Here are some resources, and if you Google for your specific state or country, you can find more:

A big thank you to naturalist Susan Thomas, who is a program coordinator for the Blackstone River Coalition. You can learn more about this particular project at http://zaptheblackstone.org/zap/.

Try This At Home: The Hollow Face Effect