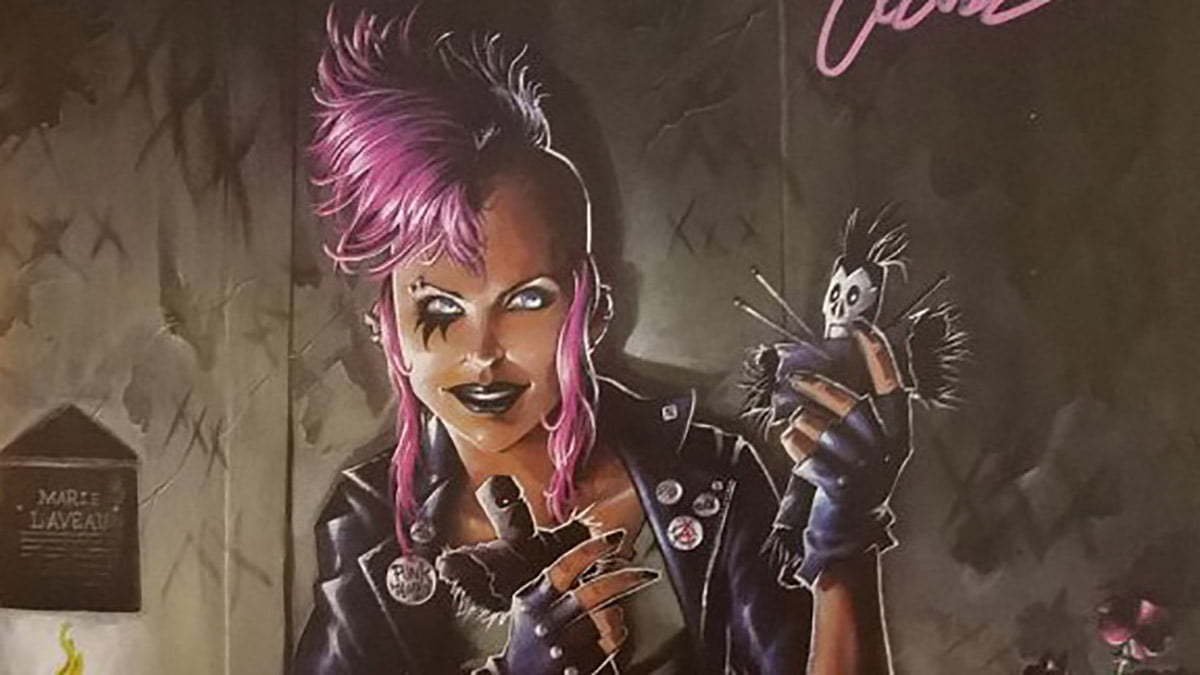 Punk Mambo #1 plays like a Bikini Kill album spilled across the page. It’s beautiful in its hardcore, abrasive but altogether confident styling. This debut issue delivers a solo series for Punk Mambo, formerly known as Victoria Greaves-Trott, and one of the Valiant Comics Universe most intriguing characters.

Punk Mambo embodies the dark humor and sarcastic wit that readers have come to love in Valiant’s heroes and anti-heroes. More than that, this upper-crust British teen turned hard-living voodoo priestess bleeds the defiant rebellion of the London punk culture even as she lives the life of a Mambo in the deepest swamps of Louisiana’s bayou country.

Cullen Bunn and Adam Gorham tempt us to tag along with the irreverent Punk Mambo as her investigation into the disappearance of a couple of gutter punks in the New Orleans drags her into a deadlier mystery demanding her presence in the heart of Voodoo’s birthplace, the home of Voudon, Haiti.

Spoiler Warning: If you have not read Punk Mambo #1, there may be spoilers below. 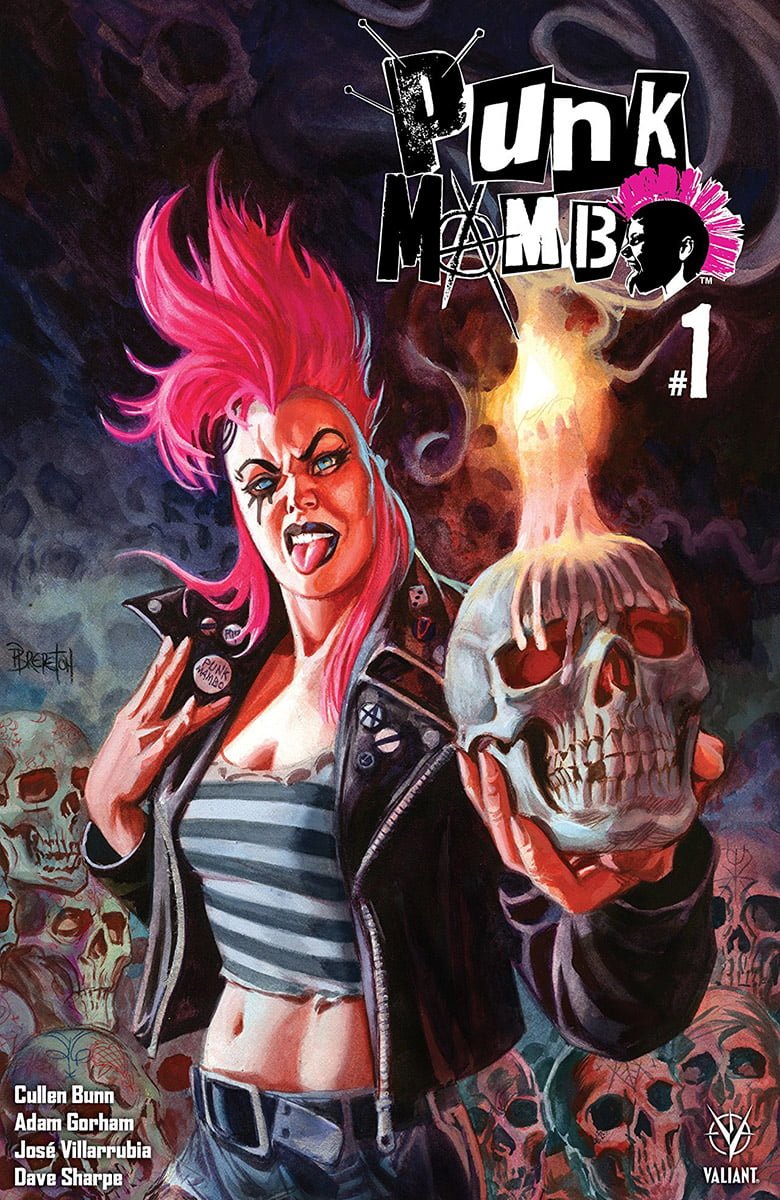 Punk Mambo #1 offers an incredible range of covers with some great artwork. If I had to choose a favorite, it would be a close race between Brereton’s cover A and Jen Bartel’s Knowhere Games & Comics Exclusive cover. Jen’s artwork always ranks high for me since seeing the first issue of Blackbird.

Who Is Punk Mambo?

Victoria Greaves-Trott came from the upper-crust, a young disaffected socialite attending an elite school who’d had enough of society’s rules. Suspension led to running away, which led her to the infamous King’s Road. It was here that Victoria learned rebellion doesn’t feed the body even if it pleases the soul.

Taken in by a couple she mistook for friends, she found herself trapped in the lair of a Houngan. The lecherous old voodoo priest went by the name Joe Mayhem and collected innocent souls like Victoria to fuel his Wanga.

While most went insane or died from the debauched rites and practices, Victoria observed Joe’s closely and learned all he knew. When she grew strong enough, she used their power for herself and broke free, swearing she’d exact her revenge on Joe Mayhem and the “friends” who sold her out. The story of her revenge is available free from Valiant in Punk Mambo #0. 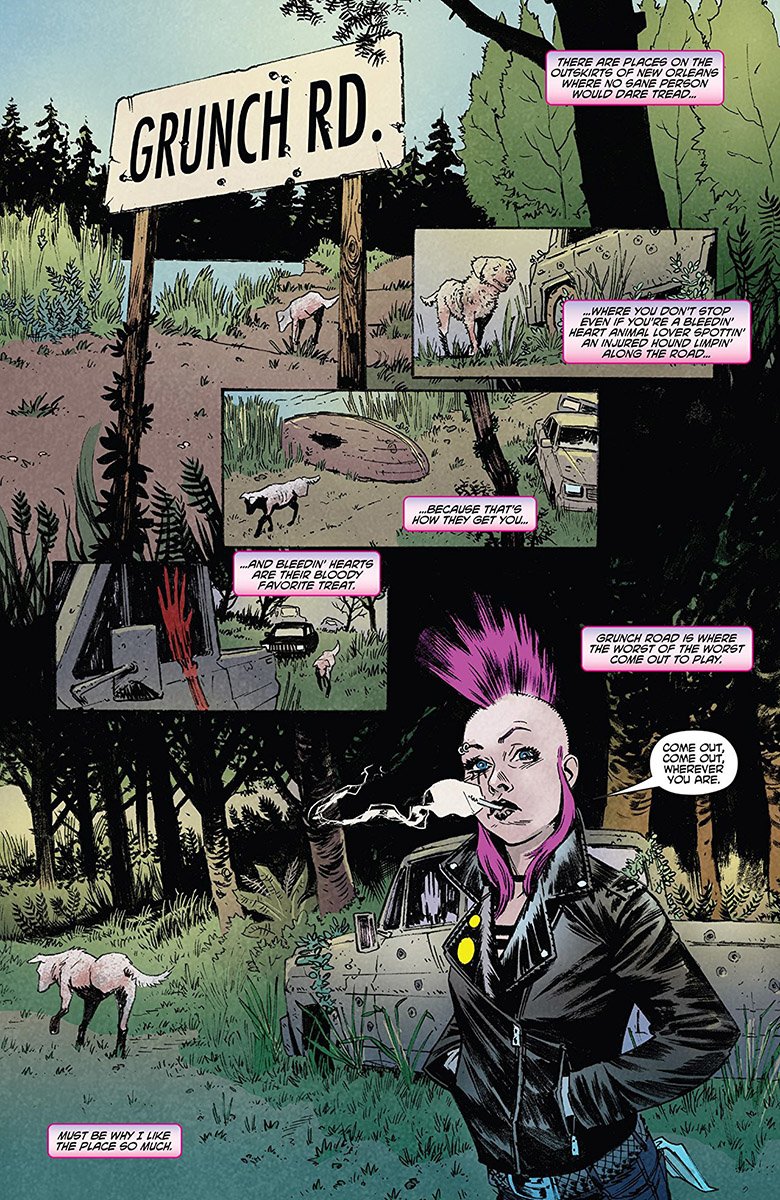 Punk Mambo #1 rachets the creepy factor to eleven from page one. We join Victoria somewhere in the outskirts of New Orleans on desolate Grunch Road. Victoria follows a limping dog as she investigates the abductions of a couple of “friends” from the gutter punk scene. Victoria, A.K.A Punk Mambo, starts this mission intending to save these kids from the inbred cannibal monsters who’ve kidnapped them with the help of Aye, her Loa.

During the battle, Aye is quite literally bagged by a mysterious entity. So Punk Mambo returns the abductees successfully, but now she’s got a bigger problem. Usually, Loa attach themselves to a host, effectively possessing them. In Victoria’s case, she has bound Aye, short for Ayezan, to herself flipping the tables and effectively “possessing” the Loa. Whoever or whatever kidnapped Aye was powerful, and such an affront is not about to go unchallenged.

As Victoria wanders the streets of New Orleans, desolate among the St. John’s Eve celebrants, she’s graced with a visit from the “Voodoo Queen” Marie Laveau. Mambo responds with her usual warmth and all the friendliness of a pissed off porcupine. Laveau, rather than being offended, drops hints that lead Victoria to the heart of Haiti. What Mambo discovers there sets in motion the real story for this series. Retrieving Aye will demand more of Punk Mambo than she could have ever expected. 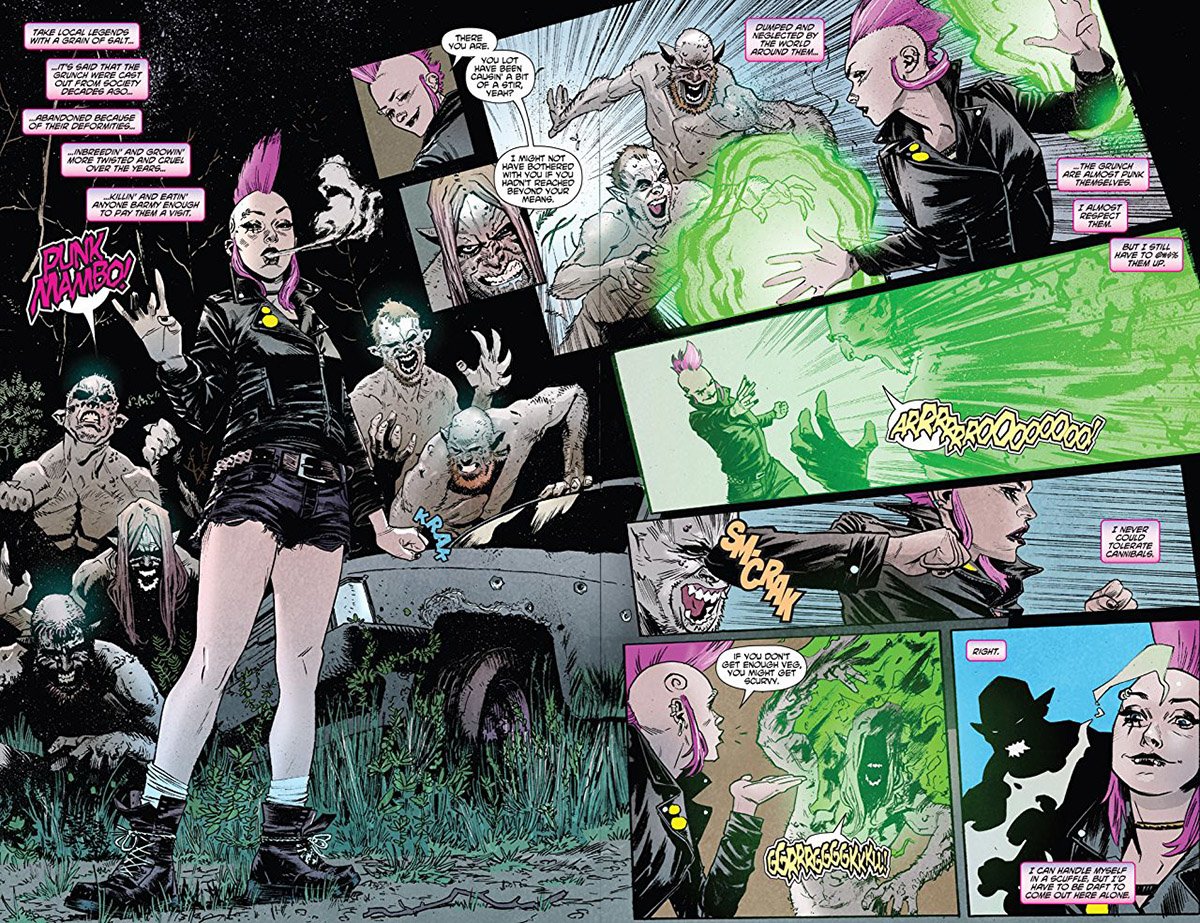 Cullen Bunn Does It Again

Writer Cullen Bunn continues to demonstrate his storytelling skill in Punk Mambo #1 with a brilliantly structured opening sequent that snatches the reader’s attention. The opening plays out much like a horror movie scene, starting in an eerie swamp and progressing to a high action monster battle. Yet, throughout the intense battle, a good chunk of the exposition is handled. This prevents the set-up issue from being a slog.

Bunn’s proven his writing chops many times over, so there was no doubt he’d deliver an engaging tale. Still, he’s done a solid job crafting a first issue that is accessible to new readers as well as those who know Punk Mambo’s history. Bunn weaves references to the wider Valiant Universe and uses Mambo’s stubborn defiance in her conversation with Laveau to give us a sense of what lies beneath her leather and shredded denim surface. 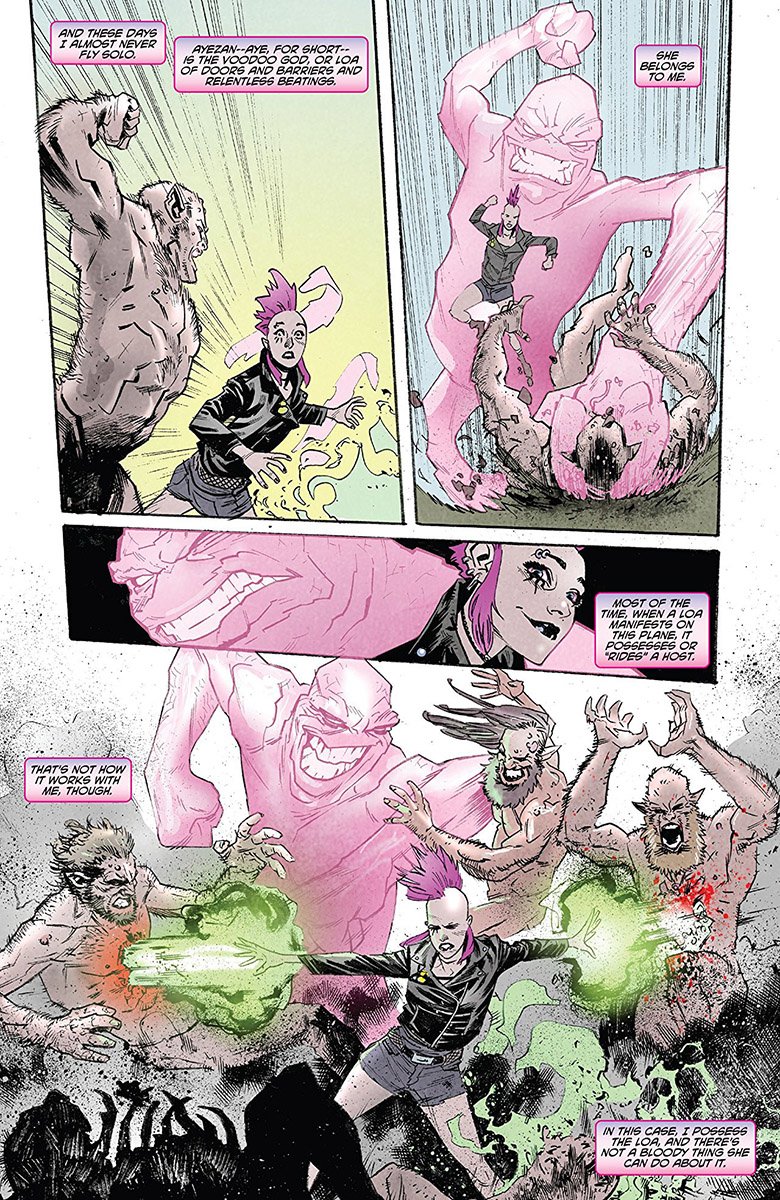 Adam Gorham’s art couple with José Villarrubia’s colors give Punk Mambo #1 it’s edgy punk style without sacrificing action or devolving into cheesy caricature. Gorham balances the Mambos expressions so well that even in her venerable moments, you see her unyielding rebellion. Gorham’s careful page layouts left plenty of space for narration, and the panel breakouts keep the action moving, and his location renditions communicate a strong sense of how strikingly different Mambo is from the roots of her religion. Most impressive were his nightmarish deformed cannibal family and the stunning full-page splash on the final page dropped readers smack into a world of powerful spirits.

Villarrubia chose a perfect color palette for the wetland landscape of New Orleans: the faded green and brown tones that whispered horror through everything from the murky waters to the abandoned vehicle and muddy ground. He uses to contrast like a genius, integrating Mambo’s pink and black into the backgrounds and landscapes to add tremendous punk gravitas to the entire book. 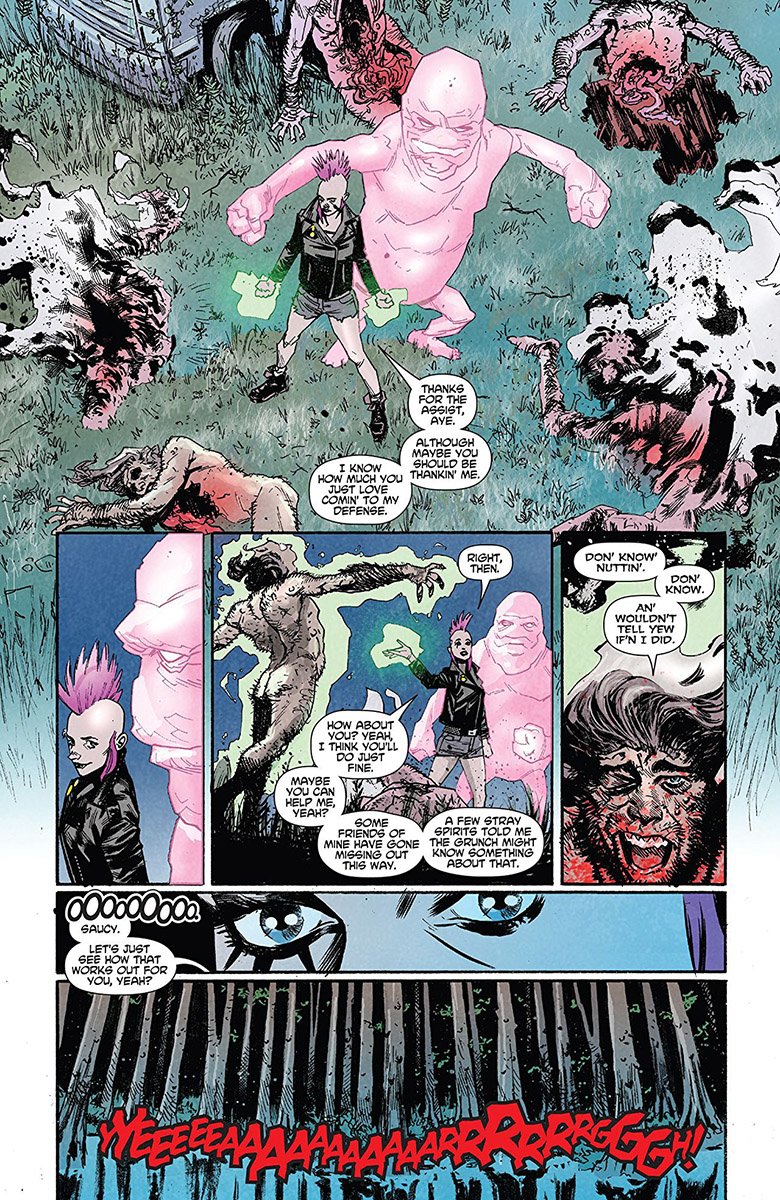 Valiant sets the age recommendation for Punk Mambo #1 at 15+, and I have to concur. There are some entrail spilling moments, intense violence, and more than a few nightmare-inducing moments in this issue. For your average adult comic reader, there’s nothing too horrific. There are worse scenes in War Of The Realms: Punisher #2 in terms of violence.

Other Info: Voodoo which is a pop-culture caricature of the Afro-Caribbean religion Voudon. The worship of many spirits is practiced by Voudon believers. Each Spirit rules or guards a specific domain. For this reason, practitioners of other religions still associate Voudon and Voodoo with the occult, black magic, and Satanism. If you are uncomfortable with the occult or with the practices of other religions, then this isn’t the book for you. Also, I cannot attest to the veracity of the practices seen in Punk Mambo in relation to the Afro-Caribbean religion Voudon.

Marie Laveau: “Ayezan is beyond your reach now and the other spirits… They just don’ like you very much.”

Ouch! I guess when you flip the nature of magic on its ear though, you are bound to create a bit of animosity. Spirits are used to possessing people. I’m guessing they aren’t fond of the reverse being done.

Next Issue: Punk Mambo #2 is currently available in your local comic book store and on ComiXology or Kindle. 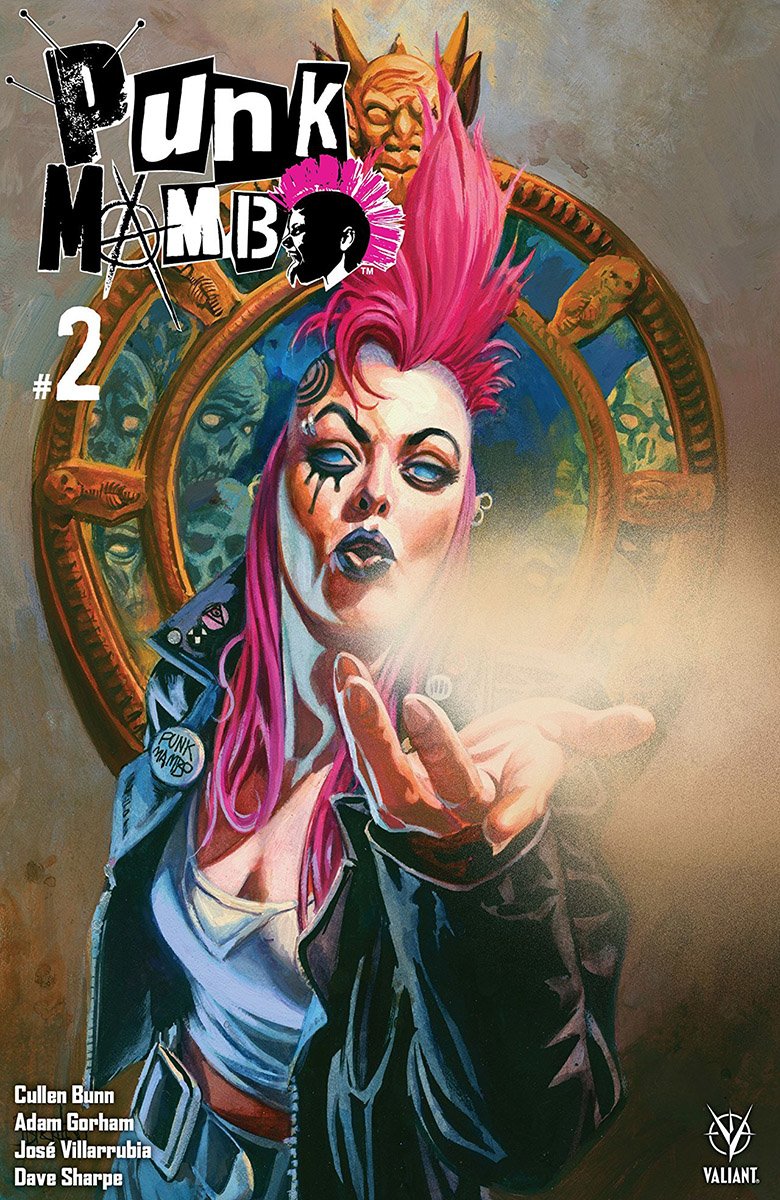 Get to Know a Hero: Blackagar Boltagon (aka Black Bolt), King of the Inhumans

5 Reasons to Watch ‘Alice Through the Looking Glass’