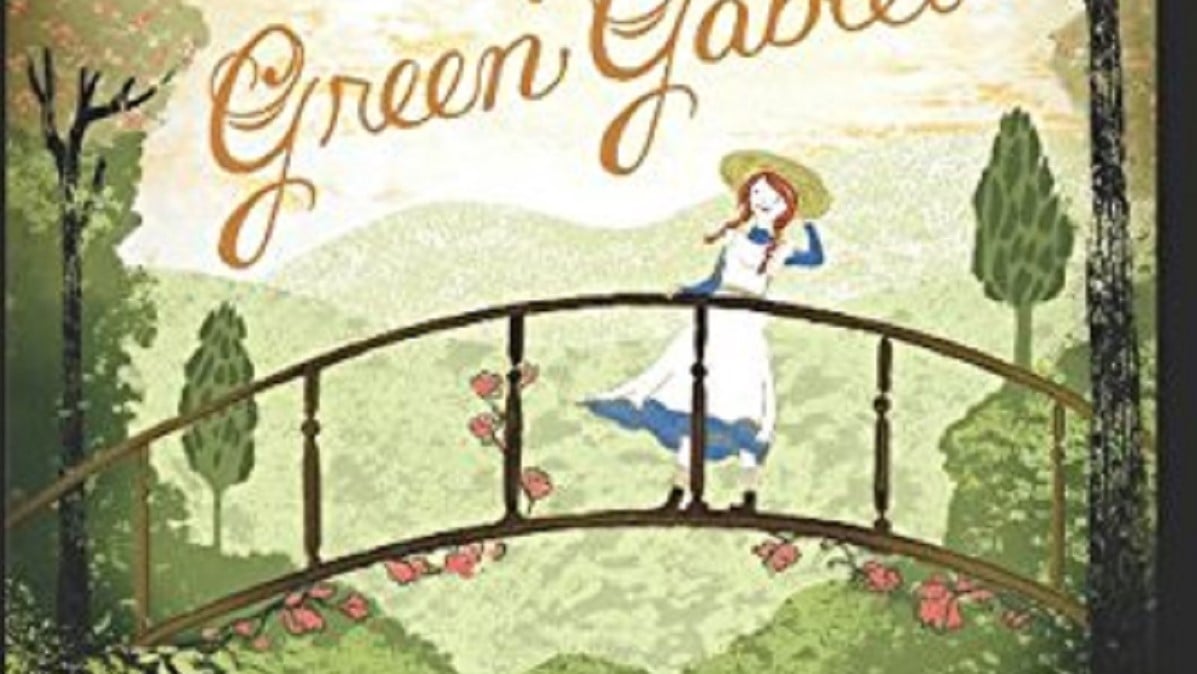 We finished the last book we were reading over Memorial Day weekend, when the library was closed. There are quite a few books I would like to read to the kids next at the library, but the only book at home that I wanted to read them right now was one of my life-long favorites, Anne of Green Gables.*

My extremely Anne-like daughter was nonetheless incredulous. “I don’t want to read that one. It’s not a fantasy. I want one with magic in it.”

“Well,” I said, “this is about another girl who loves fantasy, even if her own story isn’t actually a fantasy. It’s good to switch up genres sometimes. You’ll like it more than you think.”

Her older brother was more open. I’d already told them both how much his sister reminded me of Anne, which intrigued him. So I started to read, whether his sister wanted it or not.

It didn’t take much of Anne to convince my daughter that they were, indeed, kindred spirits, as Anne would say. “She’s my twin! Did you separate us at birth? I’m 115 years old!” Which Anne herself might have said, although perhaps in words a bit more flowery.

Anne had always been a kindred spirit to me, too, and in all likelihood tops my list of favorite fictional characters ever. On one hand, I identified with her, because we thought so much alike. On the other hand, I envied her ability to talk. Sure, most people who actually interact with her think she talks too much, but my brain and tongue have always had a loose connection. I was no stranger to Anne’s tendency toward stream-of-consciousness rambling when it came to what went on in my head, and, as you may have picked up from my less trimmed-and-edited articles,** I can definitely ramble in writing. Just not with my mouth.

My daughter is a talker. She chattered away conversationally before she even spoke in actual words. Combine the imagination she inherited from me with the talking she inherited from her dad, of course she’s a little Anne Shirley. She’s also an utterly textbook case of how ADHD-Combined type presents itself in girls.

And so, of course, is Anne Shirley.

Now, I mentioned this in my “Mental Health Awareness Through Fiction” post last year, but some people caution you against diagnosing fictional characters with real conditions. When you ask women with ADHD to name fictional characters they feel also have ADHD, Anne Shirley inevitably comes up, but there is always someone who will say, “You can’t say that. She had a traumatic early childhood, and that informs her personality more than anything.” So? says I. It’s also documented that trauma increases the intensity of ADHD symptoms. But you can have a traumatic childhood without developing ADHD and you can develop ADHD without a traumatic childhood; they’re comorbid issues, I talked about that here the other week.

But to actually read the book with this in mind is a revelation. As I told the kids, ADHD as a medical diagnosis didn’t even exist when this book was written, but if you didn’t know better you could swear Lucy Maud Montgomery had a checklist of female ADHD symptoms and was making careful sure to include each and every one of them as she wrote. Verbal diarrhea, check. Flits from one topic to another without preamble, check. Hyperemotionality and intense mood swings, check. Chronically disorganized, check. No sense of time, check. Acts on impulse, check. Has trouble completing simple tasks because she gets distracted halfway through and forgets what she was doing, check. A people-pleaser who wants to do the right thing but keeps stumbling into trouble anyway, check.

Those aren’t a random collection of unrelated character traits. Those all go together to describe how real young space cadets actually work. Either Montgomery herself had ADHD and was simply writing what she knew, or she knew someone else with it whom Anne was based on. It’s far too dead-on to be coincidence.

My complete lack of hyperactivity, and the way my ability to ace tests counteracted my complete inability to remember my homework, meant no one spotted the AD(H)D*** in me until my own kids were diagnosed. But I was always drawn to hyperactive people, fictional and in real life. I used to suppose—especially in the case of my husband—it was a matter of opposites attracting, their presence and energy being what shrinking-violet me most lacked. But now I see there was a little more to it than that. Anne makes it clear.

I envied and admired characters like Anne not because they were different from me, but because they were me… but out loud. I was Anne on the inside. I did have all the inattentive symptoms of ADHD: the hyperemotionality, the disorganization and time blindness, the inability to finish what I started because I got distracted halfway through… and on the plus side, the endless imagination. There was so much imagination. And I always felt a little bit trapped growing up, because there was ever so much going on in my head that no one ever knew about because I so rarely was able to speak it! I wanted to be heard, I wanted to be noticed, I wanted other kids to think of me as the one with all the great ideas because I was the one with all the great ideas but I was never able to let them out. Sure, verbal diarrhea doesn’t sound very pleasant, but it was better than my verbal constipation.

It was like I didn’t feel like I could fully be myself because I was missing those hyperactive symptoms, and I didn’t even realize an Attention Deficit Disorder was what was causing the rest of it. Is there something messed up about envying people who had MORE symptoms of a disorder than I did? And why couldn’t I feel complete just the way I was? Why did I need my mouth and brain to operate on the same speed?

Maybe I wouldn’t have become a writer if they had.

Sure, Anne became a writer anyway. But I know I started writing because it was the only way to get the huge mess that was my brain out. It was the place I could put the excess before my head exploded. I used to call it “writeritis,” when my brain just became so full I had to write, immediately, to make the mind-swelling go down. Maybe girls like Anne—and my daughter—could let that all out through their mouths, but my mouth never did want to cooperate, so I let it all out on paper, instead.

But I was a lonely kid. I didn’t have a Diana Barry of my own (until I was in 11th grade, but to be honest, she was probably even more Anne than me, and I was the Diana Barry. She looked more like Diana though). I wanted to share the huge ideas in my head, but whenever I was with other kids I clammed up, or couldn’t get my words out fast enough, and I’d get embarrassed and frustrated and start to cry, and then nobody would want to play with me because I cried all the time. If I could just get my insides out when I was with other kids, they’d want to play with me! I couldn’t say, “Okay, everybody, stop and read what I wrote, because I say things better that way!” because socializing doesn’t work like that.

I took every opportunity I did have to let my peers hear what I wrote, though. I always volunteered to read my writing aloud when the teachers asked at school, even—especially—from our daily journals. I did let other kids read my stories when they noticed me writing them. Eventually, in high school, I wrote features in the school paper that, to be honest, sounded a lot like the posts I write here on GeekMom today.

A few years ago my dad ran into an old classmate of mine who seemed really anxious to tell him how very much her daughter reminded her of me. That’s odd, I thought. What, she’s quiet and boring? However did I stick out to her that I would come to mind when she saw her own daughter?

But a year or two later I got to talk to that old classmate myself, who laid it out for me. “She is always making up stories, like you did,” she said. “She even writes them in those little stapled booklets like you used to make. I keep looking at her and seeing you, dreaming up your stories in the corner at recess, pencil stuck in your hair and paper all around!”

So I guess I did have a presence, in my own way, after all. That imagination couldn’t help seeping out in some way or another. I didn’t have to be Anne. I was Anne enough just being me.

*Which is making me nostalgic and fangirly in more ways than can fit thematically in this post. Reading it, I realize it’s kind of an odd book by modern writing advice standards—very much of it is not shown but told, by Anne, who does of course have a unique voice, but it’s sort of a counterintuitive way to tell a story that isn’t in first person, and the third person omniscient narrator gets into Marilla’s head most often. It’s kind of a wonder how absolutely alive all the incidents and characters are for me anyway, and I start squeeing about things that haven’t happened yet. And my Anne-ish daughter does NOT understand why I am so swoony for that awful Gilbert Blythe. “UN-ship!” she shouts whenever he tries to get Anne’s attention. She says she ships Anne and Diana instead, which even in my only-shipping-ships-that-are-obviously-canon opinion, still feels like a perfectly valid ship, so hey. Technically a character from a 1908 children’s book can’t canonically be labeled bisexual, but I personally don’t doubt it.

**And my propensity for footnotes!

***What was called simply ADD when I was a child is now called ADHD-Inattentive Type. The “Hyperactivity” is in the name even if it’s not in the person.

‘Fish Wielder’ Is a Rollicking Romp

1 thought on “Kindred Spirits for the Quiet Attention-Deficient Girl”