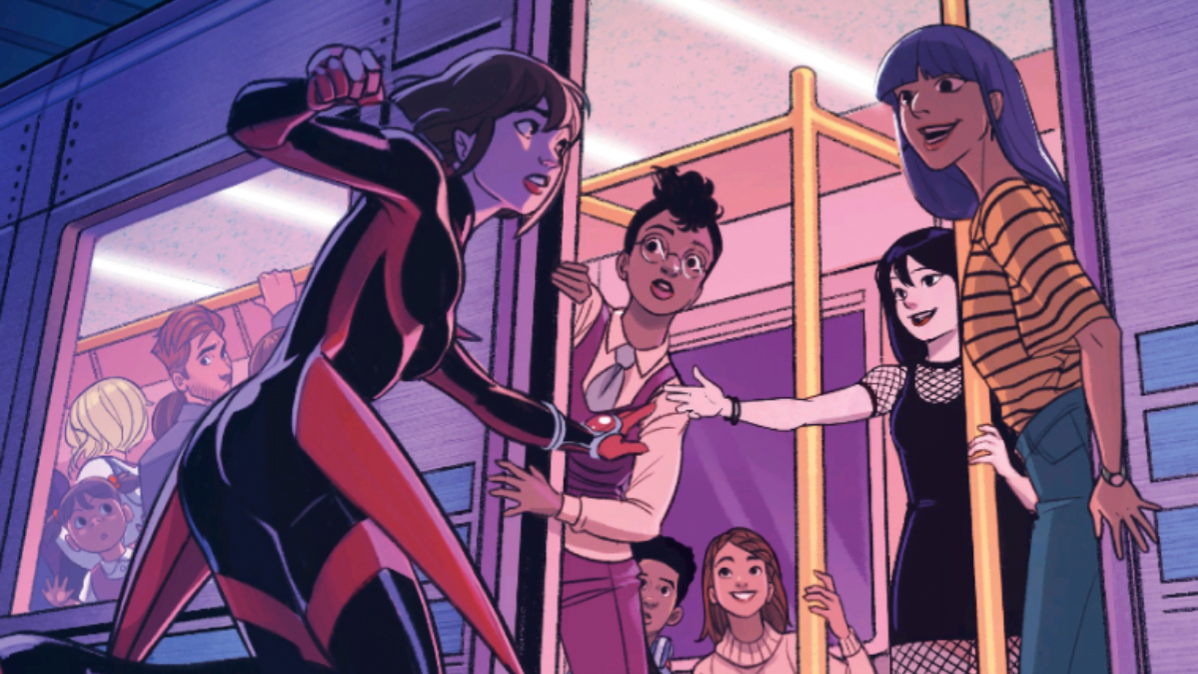 So in the last emotionally traumatic issue of Unstoppable Wasp, Nadia had swung into a depressive episode and was experiencing severe suicidality. (Although those words weren’t on the page, the image of Priya’s foot over Nadia’s and her hand on Nadia’s arm are going to stick with me for a long, long time.) After escaping from her crystal lab, she asked for help and was carefully held by some of the people who loved her most.

That’s the kind of story that can leave a long pause in the room before someone goes “ooooooooookay then, so are we ready for cake?” But issue #6 picks up easily from the previous emotional devastation. (I mean, for the Agents of G.I.R.L., but also for me.) Nadia is going around and trying to apologize to her friends. I love that they don’t all immediately accept her apologies. She seriously hurt people, and making amends isn’t easy.

We also get to see Nadia in therapy, supported by Janet. It’s so fantastic to see therapy presented in a comic as a resource, a positive thing, and something that is helping someone do better in their life. There were a couple of lines that made me fussy—for example, “inflated ego, risky behavior, and uncontrollable-goal oriented behavior” are called symptoms of bipolar disorder.

They aren’t symptoms of bipolar disorder. They’re signs of a manic phase, which in and of itself is a sign that bipolar disorder isn’t being well controlled. This distinction matters. In uncontrolled diabetes, for example, symptoms include hypo- and hyperglycemia, injuries, coma, and death. But when diabetes is well controlled, those symptoms are minimized or eliminated. The goal of bipolar disorder treatment—usually a combination of therapy and medication—is to eliminate or minimize the swing of manic to depressive phases and help someone find stability in the typical. It’s important for these things to be as clear as possible, but I can understand why they need to get compressed to fit in the panels.

Though I would have been here for an entire issue about being in therapy, especially in the year of Heroes in Graphically Showing Off My Ass Crisis, which stigmatizes mental health issues in a way that is damaging with every panel.

There’s a lot more going on in the issue that bears talking about. Priya, for example, has developed some kind of plant controlling powers after being left in the lab with experimental gas (back in issue #3). Shay is taking Ying to meet her mother (who doesn’t know that Shay is gay). These two things are equally terrifying.

I want to give a shout-out to Ying telling off Shay’s homophobic, self-absorbed, and generally terrible mother. You get a lot of crappy homophobic parents in literature in general, but this was the first time the experience felt similar to reactions in my personal sphere. Having Ying stand up for Shay (me) and tell off Shay’s mother was incredible and powerful. Also, Ying is right: Shay looks better in a suit.

This issue was definitely a bit of a breather and a regroup after the intensity of issue #5. That doesn’t mean it lets up, though; there’s plenty of meaty story here, and it’s exciting as hell. Plus, the teaser for issue #7 has Nadia taking on Bucky Barnes, the Winter Soldier, so you know something great is happening there.

One thing I want to comment on: the artist for this issue is not Gurihiru. The fill-in artist is great, and I would absolutely love to see more of their work, but having someone other than Gurihiru on the art was jarring, just because I’d gotten so used to their style.

Volume 2 is available for preorder, and Volume 1 is available online and in comic shops now. Marvel, I swear to God, if you cancel this series again I will find a way to anthropomorphize and spank your entire management team as a unified entity.