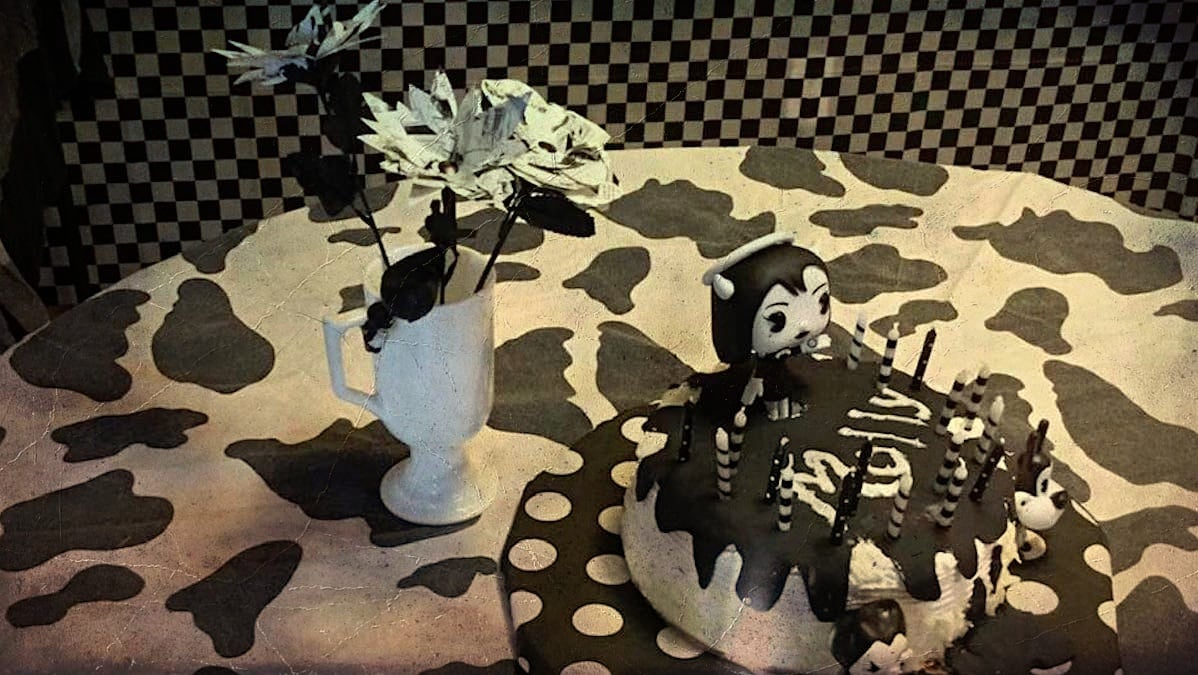 My oldest daughter turned 17 this year, and she has always been a pop culture time traveler.

She loved the 1940s, well before the music begin catching on again this year thanks to Avengers: Endgame, and has been interested in the early black and white animation styles of the 1920s and ’30s, a la Merrie Melodies and Silly Symphonies, since she was little.

For the past couple of years, she has really gotten into the retro style games like Bendy and the Ink Machine and Cuphead. I thought it would be fun to use these as a base for a birthday surprise. Since neither of these games is actually in full black and white, I took a cue from the black and white cartoon space featured in Meow Wolf’s hit attraction House of Eternal Return in Santa Fe.

Making a space look like an old black and white image was a fun challenge, but not that hard if you follow the right steps. Here is what I did:

This was easy enough to figure out as I wrapped the presents black and white tissue paper and bows, but I also added a couple of grey packages. Use flat grey paper and avoid silver, as the sheen can actually reflect a little color. To theme it, I printed out some Bendy and Cuphead inspired patterns from Pinterest for smaller items.

Start with a plain white cake and a tube of pre-done black fondant. I cheated and purchased a cake at a supermarket bakery, but this will work with any home-baked cake, as long as the frosting is white.

Roll out the fondant thin and large enough to cover the top of the cake with an inch or two extra around the edge. Cut some wavy patterns around the edges to look like an inkblot. This way, when it is placed over the cake, it will appear to be pouring ink. I even added a little extra fondant at the bottom in one area to look like ink puddling up.

In plain white frosting, write a message or name on the top. I like the old cartoon style because I have terrible penmanship, especially with frosting. This style let me take advantage of my natural messiness.

Add some black and white candles and, if desired, a little plastic figure. I used an Alice Angel Funko I found at Hot Topic, but I have seen black and white Bendy, Felix the Cat, Steamboat Willie, and other retro figures on Amazon and at other retailers.

For a serving base, use a large black or white plate, or cover a wooden cutting surface or piece of cardboard with black and white paper. Wood and foil bases will detract from the black and white effect, so make sure they are well hidden.

This is where I had the most fun because I got to go crazy with patterns. I found some big, plastic checkered tablecloths to cover the walls, and covered the corner with them.

I printed out some movie pin-ups inspired by Bendy as well as some vintage movie posters for classic shorts like Steamboat Willie and Skeleton Dance.

To make it seem more like an actual wall, I printed a screen grab from a Cuphead trailer in grayscale, blown up to about a 16″ x 22″ images. This printed out on four sheets of standard typing paper. I pieced them together and used some black tape to create a windowpane look. I took two rectangular pieces of an old plastic tablecloth and drew them back with ribbon to give it curtains.

The finished window was light enough to place on the backdrop with some strong tape, and it made the entire wall seem more… animated.

I finished the display off by adding patterned tablecloths on the main dining table, and small end table for the presents, then placed a few black and white balloons around for good measure.

For an extra touch, I made some easy paper flowers with old black and white comic book pages.

I sprayed some plastic flower stems black to start. I used some stems leftover from chocolate rose candy, but plastic stems from cheap dollar store flowers are also fine.

I cut some easy flower templates on plain paper, in various shapes and sizes, and then used them to cut the comic shapes. Comic pages are thin enough that you can stack three or four pages to cut at once. I used some pages from a Previews catalog, but newspaper or printed out images look fine too.

To make the flower, stack about six layers of the flower pieces (larger sized layers on the bottom) and place a black or white thumbtack through the middle. Push the flower down in the stem, where it holds the bud. It should hold pretty solid without glue if pushed hard enough into the center.

The overall result was very effective, and it felt like walking back in time to an old cartoon, despite the fact the rest of the room was in full living color.

I am even thinking of trying this with a classic Universal Monsters photo area for the next Halloween party we throw.

STEAMPUNK WEEK: How to Make a One-Hour Bustle Skirt