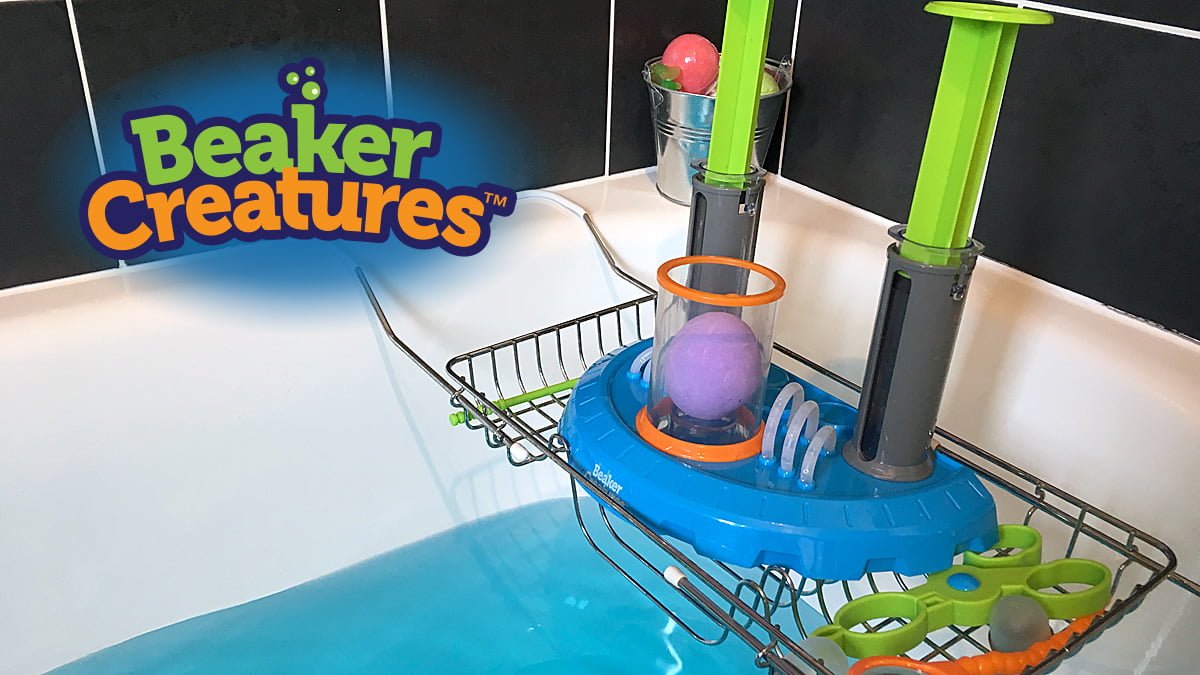 What are Beaker Creatures?

Beaker Creatures is a range of toys that combine STEM-focused activities with blind box style toy collecting. There are over 50 alien creatures to collect once you have extracted them from their colorful bath bomb-style Reactor Pods.

There are several Beaker Creatures sets available at a number of different price points. We were sent:

There is also a Whirling Wave Reactor available as well as an official lab coat and goggles for kids who want to dress up whilst playing.

How Does Beaker Creatures Work?

The Beaker Creatures Reactor Pods are effectively bath bombs containing a plastic capsule inside which is hidden your collectible creature. The whole process of releasing your Beaker Creature using the Super Lab is (if we’re being honest) a long-winded method of using a bath bomb, but I’ll happily admit it’s fun and looks great. If you haven’t bought the Super Lab set, you can just as easily use a bowl of water or the sink to open your pods, it’ll actually be much quicker although it won’t look nearly as cool.

Assuming you do have a Super Lab, first, you need to build it. This was very simple and only took a few minutes as the few parts clicked together easily. The trickiest bit was connecting the rubber tubes at the bottom and making sure they had a good seal – this is important or else the Lab won’t work correctly. Once the Super Lab is constructed, you’ll need to fill your Hydroplungers with water. These are effectively two large syringes so they are easy to fill by sucking water up into them and the two beakers supplied in the set have wide enough necks to use them as filling stations. You then use the tongs to place an unwrapped Reactor Pod in the chamber at the front. Finally, you fit your two filled Hydroplungers into the columns at the rear of the Super Lab and you’re ready to go.

Pushing down on the two Hydroplungers simultaneously (the simultaneous part is important or physics will backfire on you) will send water through the coiled tubes and into the chamber where the Reactor Pod will begin to.. React. At this point, you’re probably going to wish you’d done this on top of a towel. For reference, even with the plastic drip tray from the box underneath the Super Lab, it made a mess. I gradually moved our Beaker Creatures experiments from the kitchen counter to the kitchen sink and then to the bathtub – if only to make cleaning up easier. The Reactor Pods fizz with quite a bit of energy, although we did notice that the amount of fizzing seemed dictated by the color, with certain color pods giving off a more energetic reaction than others. After our first reaction, as seen in the video below, I was spotting purple flecks up my kitchen tiles.

The Reactor Pod will take a few minutes to fully dissolve, at which point you’ll be left with frothy colored water and a plastic capsule that looks live a small, grey, UFO. Inside this will be your Beaker Creature, extract it and see who you’ve got from the poster charts.

Who are the Beaker Creatures?

The Beaker Creatures themselves are small, plastic collectible alien creatures. They each measure around one inch tall and they come in several different families.

There are currently two series of Beaker Creatures. All the items we received were from Series 1 where the families are:

In Series Two, the families are:

Each creature has a name and there are six to collect in each family, along with some limited edition gold variants. Once extracted from their Reactor Pods, the Beaker Creatures don’t actually do anything, they’re simply collectible, however, each Beaker Creatures set comes with guides to the different kinds of environments where you might find them, and a look at the real creatures that also live there along with a multiple choice quiz.

What are the Magnification Chamber and Bio-Home?

These two sets are display stands for your Beaker Creatures and are not used to open the pods or do anything much else.

The Magnification Chamber is a large test tube which holds three Beaker Creatures in a kind of pull-out shelving unit. A magnifying lens is attached to the top by a flexible arm so you can examine your creatures in greater detail. The chamber itself isn’t large enough to place a Reactor Pod inside which is an oversight in my opinion as this would have made the set a lot more useful.

This was easily my least favorite from all the sets we were sent because it did the least and is little more than an oversized display stand. The experiments listed for it including mixing oil and water together inside it or mixing vinegar and baking soda with red water to create a volcano – neither of which need you to purchase a $20 plastic test tube to perform.

The arm for the magnifying lens on the side was so awkward that we were never able to get it attached to the chamber at all and I often found that it would pinch me when I manipulated it because of the way the plastic pieces interconnected.

Perhaps strangely, the Bio-Home was one of my favorite items from all our sets, even though it doesn’t do much either. This is a small plastic container which can house one or two Beaker Creatures with a built-in magnifier in the “glass” at the top. At the back is a slot where you can slide in a background. All the classification cards that come with the Reactor Pods are backed with an illustration of an appropriate landscape including underwater, outer space, etc that can be used here. This gives you a cute little scene that you can display which is easy to change with different creatures and backgrounds making it much more aesthetically pleasing than the Magnification Chamber. If your kid wants to display their Beaker Creatures – this is the set I’d choose.

Who Will Beaker Creatures Appeal To?

The Beaker Creatures will appeal to a lot of kids. The recommendation is from age five plus (there’s a lot of very small parts) but kids from well-supervised toddlers through to even some high schoolers will probably enjoy these sets. There’s just something about watching colorful, bubbling reactions that appeals to all kids – and even a lot of adults. I’ll admit that it was fun watching the Reactor Pods froth up and bubble all over the Super Lab. It ignites the mad scientist within us all!

Any kids with an interest in STEM, chemistry, and aliens/monsters will particularly love Beaker Creatures.

Should I Buy Beaker Creatures?

Let’s start out with some honesty, shall we? These are bath bombs with collectible plastic monsters inside them. For all the, admittedly impressive, frippery around them and promises of “science revealed” and “amazing experiments” – that’s what you’re buying here. That’s not necessarily a bad thing, but it is the truth. The experiments in the instruction guide are things like mixing water dyed with food coloring, making slime, and demonstrating how water and oil don’t mix by combining blue dyed water and baby oil – all easily googleable and almost certainly thought up before by any parent looking to buy a set like this. FYI, cleaning the Super Lab after that last one took far too much effort for me to recommend you try it, it’s still kind of slippery several weeks later.

One of the criticisms I’ve seen online specifically regarding the Liquid Reactor Super Lab is that once you’ve used up the two Reactor Pods inside the box, you have to keep buying more individual pods or it becomes another useless toy lying around the house. There is merit to this argument. You’ll have used those two initial pods in a matter of minutes and at around $5 for a single additional pod (or $20 for six, the best deal I’ve spotted so far), keeping a steady supply will rapidly become very costly. However, I discovered a way to keep the Super Lab in use well after we had run out of Reactor Pods by moving the Super Lab to the bathroom where it now lives with our bath toys.

At nine, my son is well past the age of playing with rubber ducks, however, he has been enjoying filling the Hyrochambers with colored bubble baths and experimenting with placing other items like bath salts in the chamber. We quickly discovered that any bath bomb which fits inside the chamber will work just as well as a Reactor Pod for producing that satisfying frothing effect – including cheap multipacks from dollar store type shops and the bath bombs from his make-your-own kit. Sure, there won’t be a plastic monster inside but that’s only one part of the fun and my son quickly relegated his Beaker Creatures collection to a cupboard anyway. My bathroom now looks like a science lab with beakers filled with colored liquid around the edge of the tub!

While the “Collect ’em all!” element of Beaker Creatures is something I’d try to steer away from unless you have money to burn, the Liquid Reactor Super Lab is a lot of fun both with Reactor Pods and for use as an unusual, stimulating bath toy. I would personally avoid the Magnification Chamber as there’s just not enough in that set to justify the cost, the Bio-Home is very cute if your child wants to display their new creatures somewhere but it too is likely to end up at the back of a cupboard – my son lost interest in displaying his Beaker Creatures fast and now only plays with the Super Lab at bath times.

This is a cute toy range that will really appeal to kids but doesn’t have much longevity without improvisation or purchasing many additional Reactor Pods. Whether it’s worth it to you will depend on your bank balance and feelings about blind box style toy collecting.