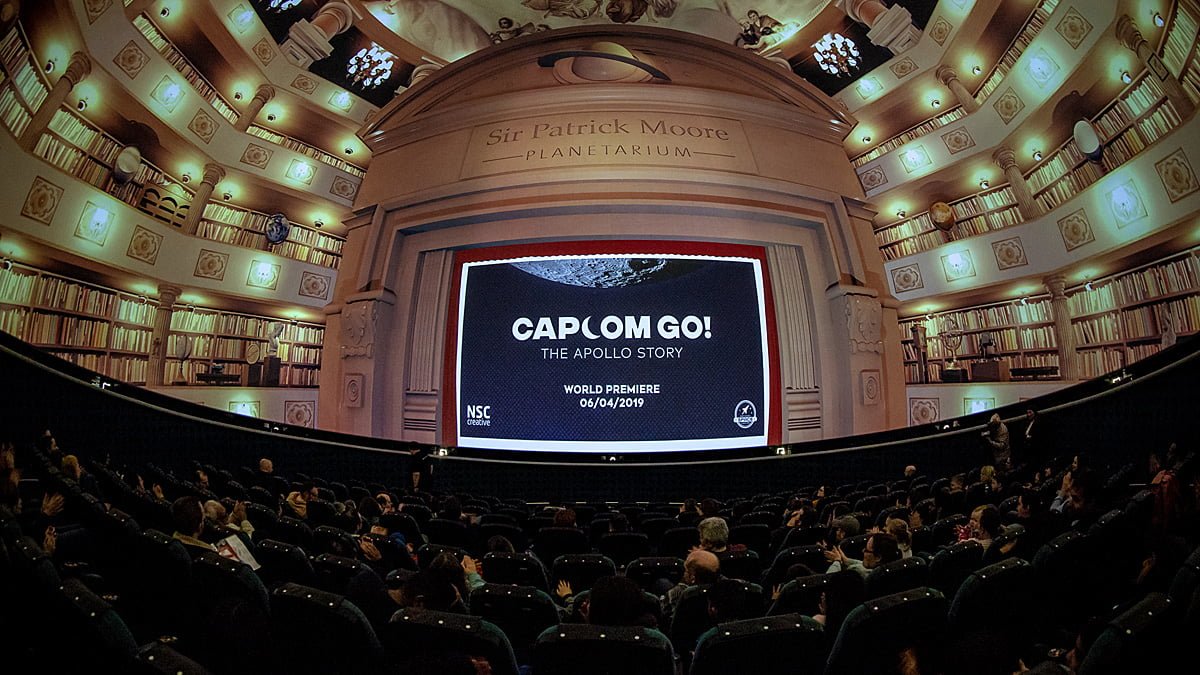 CAPCOM GO! The Apollo Story is a new, full-dome, immersive documentary movie for planetariums that explores the history of the Apollo Space Programme, including the historic Moon Landing that celebrates its 50th anniversary this summer. Last weekend, my family and I were invited to the National Space Centre in Leicester, UK where the film will be a permanent installation, to watch the World Premiere.

CAPCOM GO! The Apollo Story packs an enormous amount of history, emotion, and tension into its short running time. Rather than focusing solely on Apollo 11, the film looks at the full history of Apollo and it doesn’t shy away from tragedy; a long, lingering shot of a scorched module in a darkened room serves as the backdrop to narration about the awful events of Apollo One. However, the majority of the film is upbeat, reveling in the accomplishments of the era.

I was thrilled to see that the people behind the scenes were given their moments to shine too. The iconic 1969 photo of Margaret Hamilton stood beside her books of hand-written code took center stage while the faces of the women so belated made famous by Hidden Figures also appeared in a sequence dedicated to the computers of Apollo.

My nine-year-old son was particularly enthralled with the sequence where Neil Armstrong took manual control of the Eagle lander and tried to find a safe place to touch down with only seconds of fuel remaining. He was amazed at how realistic the entire scene was, telling me later that he felt as if he would float away into the air if he stood up from his seat!

The vast majority of CAPCOM GO! The Apollo Story uses CG both to recreate events in HD resolution unimaginable at the time and to explain the complex math required to pull off the Apollo missions. As viewers, we get to whiz around our patch of the solar system looking at the trajectories calculated to send the astronauts around the Moon and get them safely home again, fly over the Moon seeing it as Armstrong and Aldrin would have done, and watch the launch of a Saturn Five rocket from directly above. As with most immersive planetarium films, some of these sequences can make you feel dizzy, but it’s easy enough to close your eyes for a few seconds and let the feelings pass.

The CG sequences are intermingled with photos and videos from the era, and some of the most iconic audio clips lifted from the missions. I’ll admit now that there were several moments that brought a tear to my eye from the sheer emotional power of the scene – hearing Armstrong’s “one small step for man…” speech and Mission Control announcing that they have “a bunch of guys about to turn blue” always brings me out in goosebumps, but hearing them over such awe-inspiring images was simply incredible. It’s impossible to imagine how it must have felt climbing into an Apollo module and knowing full well there was a good chance you’d never make it back to Earth again, but CAPCOM GO! The Apollo Story made me feel as close as I ever have done to those few brave astronauts who were there.

The film ends with a look at the present and future of space exploration, flying around the International Space Station, and considering who the next generation of explorers will be, with a diverse array of faces on screen. For my son, who is deeply interested in STEM subjects, this was a fantastic moment that encouraged him to think seriously about the opportunities that will be available to him should he want to consider a career in the space industry.

As we were attending the World Premiere of CAPCOM GO! The Apollo Story, our showing had the film’s director in the building. We were treated to a Q&A session after it ended where we could ask questions about the Apollo missions which were answered by both the director and a very well-informed member of the National Space Centre crew. For our family, however, the best part of attending the premiere was that my son was chosen to press play on the film after raising his hand and correctly answering a question about the Moon Landing. A real honor indeed.

CAPCOM GO! The Apollo Story is a visually stunning film that manages to balance the history of the Apollo Programme with the emotional impact of the events, without falling into the trap of becoming overly sentimental, and I would highly recommend it to everyone.

If you’d like to watch CAPCOM GO! The Apollo Story, it will be running indefinitely at the National Space Centre in Leicester, UK. You can also see it at various planetariums around the world including:

GeekMom was invited to the National Space Centre and the premiere of CAPCOM GO! The Apollo Story for review purposes.

The Ultimate List of Tutorials, Apps, and Games to Teach Kids Coding

Gulp: Adventures on the Alimentary Canal – Another Treasure From Mary Roach