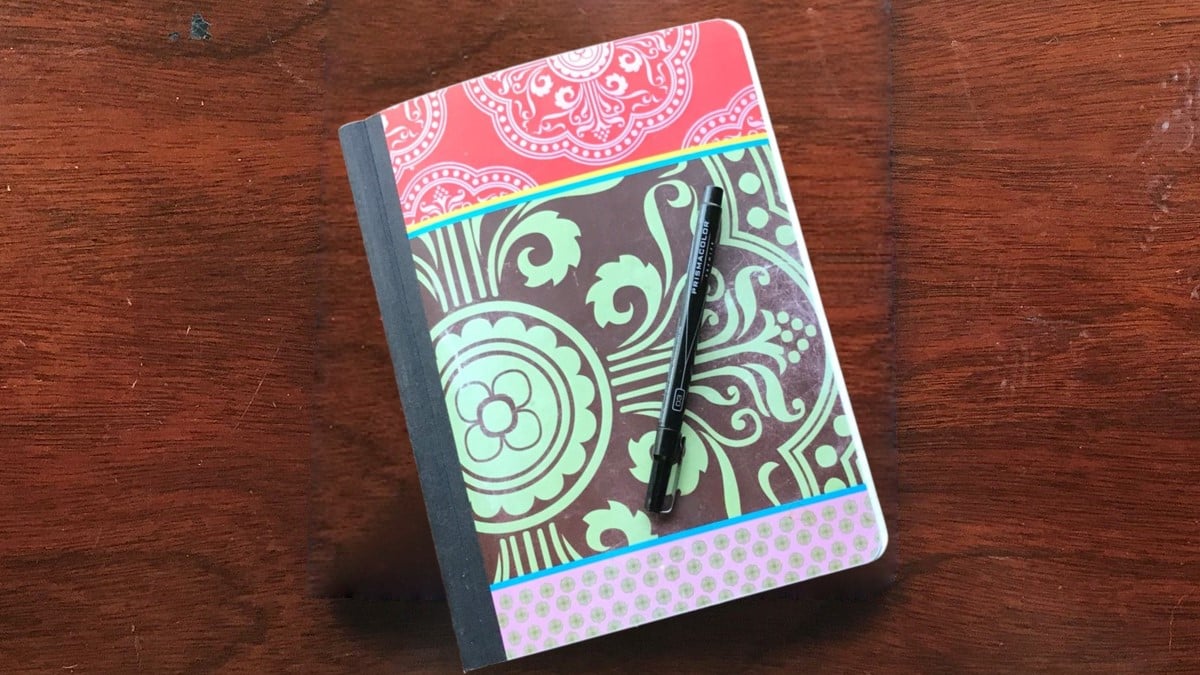 Hi, hello, happy 2019! Now that we’re almost into March and gotten past that time of year when we all get inspired to tackle our to-do lists and take on all kinds of crazy schemes, I feel like I can finally admit that, not only did I succumb to the bullet journal phenomenon, but I’m still going with it. (!!!)

Okay, but here’s the thing: I’m not talking about the bullet journals with the hand-illustrated daily spreads or the monthly pages with appropriate watercolor flowers as backgrounds. They’re beautiful, for sure, but I have three kids, four school schedules, a husband with three jobs, a full-time job of my own where I interface with teams around the world, and ZERO artistic talent.

(For real: I almost failed art in middle school.)

Mine is an unartistic bullet journal and it’s working beautifully for my life.

For years, I’ve seen the Buzzfeed articles (seriously, too many to link) and taken peeks into #bujo on Instagram and while everything looks very nice, I’ve kept right on going with my frankensteined-together mix of Getting Things Done and a good, old-fashioned to-do list. I can see where people find great satisfaction in creating their visual art within their day-to-day life, but that’s not where my talents lie.

Then a good friend, one whose artistic talent and crazed schedule rival and outstrip my own mentioned that she’d been bullet-journaling for about a year and loved it. This is a woman with her own business, multiple kids, dogs, cats, and a mad travel schedule. When she mentions something works, I listen, so I decided to take a closer look at the whole phenomenon.

The first thing I did after talking with her and (as my grandmother would say) getting a bee in my bonnet was to actually go look at the official Bullet Journal website.  Away from the (admittedly, lovely) artwork and designs that you see so often, the underlying structure of a bullet journal is pretty sound and workable. There’s a lot going on there, but at its most basic, the Bullet Journal is a combination of calendar, to-do list, and journal. The website has video and introductions (text and video) to the system and shows examples of how you might put everything together.

One of the most helpful things I read, though, wasn’t about the specific methods or practices, but was rather a blog post entitled, Back to the Basics. In it, Ryder Carroll, the creator of the Bullet Journal, talks about the underlying purpose of the journal, which is to serve the purpose you need it to serve. This struck a chord with me, and it’s what I’ve tried to keep in mind as I move forward with my version of the journal.

For another GeekMom look at a customizable planner, see Planner Geeks Unite for an Organized 2015.

I decided to do this on a whim and didn’t want to wait for an Amazon delivery or add the complication of looking for a specific notebook at office supply stores, so I used what I had: a standard composition book, with a slightly prettier cover than the black and white basics.

Then I sat down to figure out where I needed help in my life. Here’s the deal: my work calendar lives in Office 365 and has to be available to others in my company. My home calendar is a monster of a GCal that holds everyone’s appointments, school schedules, rehearsals, performances, and all the reminders I put out for myself to schedule things 6 or 9 or 11 months in advance. It needs to be accessible to other members of my family. Neither of those are going anywhere and the thought of duplicating the content is anathema to my technical writing brain.

So, I do have a 12-month spread, but it’s mostly for birthdays & other celebratory dates so I can see the full year at a glance and keep up with gifts and cards. (I borrowed this idea from an online friend.) I tried a couple of times to draw one, but it was a mess, so I used an Excel template and then copied the printout at 64% so it fit on the page.

I do create a monthly log, a single page that lets me track what clothes I wear to the office, what I actually put on the table for dinner, and includes habit trackers–quick columns that I can tick off for various habits I’m trying to form/break (no caffeine after 2 pm, no screens after 9, walking, weightlifting, etc). On the opposite page is my running to-do list, and I have to admit that I keep forgetting to use the official bullet journal sign for a completed task and just cross things off. I don’t mix info in here—unless it’s something directly related to the completion of the task (for example, the name of the dentist that Kid#1 was referred to, so calls and appointments can happen.) Also, after so many years of GTD, I tend to write the next action of a multi-step project rather than just the project name so I know exactly what has to happen next, so those are a little longer than the brief line suggested by BuJo.

I also have collections—so many collections! This is where I stick all my things that would be a project in GTD (basically, anything that entails more than 2 steps to complete it.) But I also use them for reference material: dinner ideas and all the stuff I think of that should probably happen around the house but for sure isn’t on the dock for any time soon. There’s one for non-fiction writing topics and a companion one for fiction ideas. The novel I’m writing has its own page, as does the list of things that would be fun to watch on Netflix and HBO and Hulu and on DVDs from the library. (My TBR list for books lives in GoodReads and is long enough that I’m not spending time copying it over.) There are also special pages for recipes that might make it into my dinner rotation and a set of things I can make for people’s birthdays and holiday gifts and everything that’s on the docket for next week’s marathon of Lord of the Rings and the accompanying seven Hobbit meals.

I also ended up using a Post-It note tactic I saw on Modern Mrs Darcy. She uses it to track her quick tasks so she can throw it away; I adapted it to keep up with the meals I’m intending to make (and for which I’ve shopped for ingredients.) I used to create a weekly meal plan, but things shift too quickly around my house and I ended up with a lot of looping arrows and crossed-out lines. Now, I write the menu ideas on a note that lives on the monthly spread. I see it, but it’s not taking up real-estate on the page. I don’t want to assign meals to specific days, but having the list right there where I’m looking every day has definitely helped me to not forget that there are fresh ingredients waiting to be cooked.

All of this is data and items that I’ve been keeping track of before, but now it’s in a single notebook, and—this is what really got me into the whole idea—there is an index at the front that tells me what page everything is written on. This is genius and I’m kind of embarrassed I never even thought to do this before. Now, my collection of Important Stuff has its own page of pointers and I can skip quickly to what it is that I need. I feel so accomplished.

A Quick Note About Supplies

Now that I’ve been working with the journal for a few months, I think a dot-grid journal would be worth the time and (minimal) cost. I’m fine with drawing the few lines I need in my minimal design with a ruler, but it would definitely be easier to do that with the grids like in a Moleskin or Leuchtturm. Also, when I started, I just grabbed a random pen, but after a few weeks, I switched to a Prismacolor Fine Tip marker (03) to help keep my notes legible even when I was writing small.

One thing I really like is that I’m customizing like mad. Waaaay back in the day, Filofax was my choice of planners, all because they offered different options to fill your binder. They were a corporation, though, and only offered a set number of pages and layouts. Now, with the bullet journal community and social media, I have access to hundreds of ideas and can pick the ones that work best for me (or use it as a jumping off point and customize further.) It’s really kind of amazing how many people share their designs and ideas and layouts–I had to cut myself off for a bit, to see how the ones I’d already identified worked for the first few months.

And circling back to my friend, the one who made me stop and think about this to start… The thing about bullet-journaling that she liked was the intentionality of migrating items from one month to the next. Each time you set up that new page, you’re in a prime place to stop and think about what hasn’t gotten done in the previous month and why that might be and whether the item deserves a place on the new month’s list. Yes, sometimes things get carried over because it’s a bigger task than I thought (in which case my GTD brain says to break it down into smaller steps) and sometimes it’s something I don’t really want to think about (which is signal enough that I really should do just that), but often enough it’s there because of that almost mindless compulsion to take on tasks.

And that’s really the biggest benefit I’ve gained from this experiment: thoughtfully reviewing the never-ending list keeps it current and relevant to the life I want to lead, rather than the life half my brain thought looked cool as I ricocheted semi-randomly through my days.

1 thought on “Bullet Journals For the Unartistic”