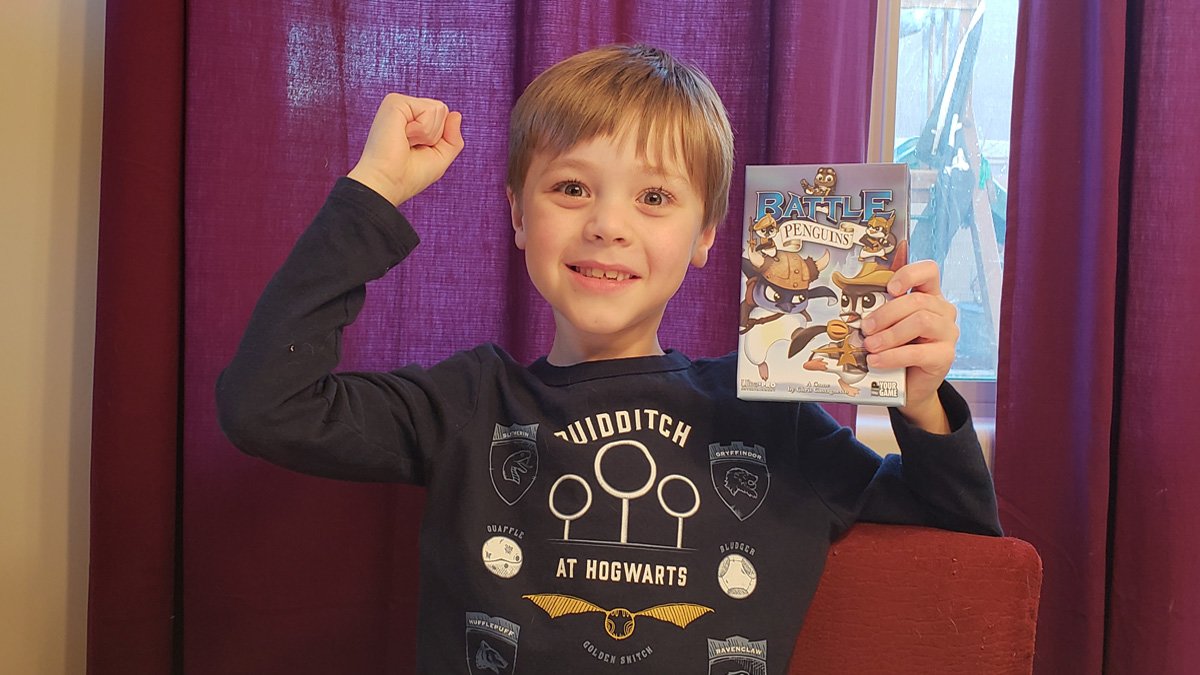 Our sons, A and W, love penguins. It started with a little penguin named Penny featured in The Magic Tree House books and pretty much escalated from there. So when my husband and I saw a copy of Battle Penguins from Ultra PRO at our local gaming store, we knew it needed to come home with us.

What Is Battle Penguins?

Battle Penguins is a card game where you recruit armies of penguins to battle it out that has a similar feel to Smash Up. The game is for 2 to 6 players ages 8 to Adult and only takes 15 minutes to play.

How to Play Battle Penguins

Battle Penguins takes about a round to get a feel for, but was easy enough for our eight-year-old A to pick up on.

The goal of Battle Penguins is to recruit the strongest Penguin Squad and claim the most fish from a series of battleground fights.

The game is made up of three rounds of play. Each round consists of a Draft Phase, a Play Phase, and a Competition Phase.

Each player selects 1 Penguin Card from their hand and places it face down in front of them. They then pass the remaining Penguin Cards to the player on their left. This process is repeated until all the Penguins are claimed.

The face down Battleground and Attribute Cards are flipped over. Players now arrange their Penguins into three squads by putting them into face down piles beside the battleground they will fight at. Each squad must have at least one Penguin.

Each Battleground has an Attribute that squads want to have the highest score on. Players now reveal their Penguin Squads for the first battleground. If any Penguins have a Present, Rogue, Traveler, or Intimidator icon, then deal with those abilities. If more than one Squad has Penguins with abilities, the Squad with the Penguin whose name comes first alphabetically goes first. After the first player deals with their Penguin Squad, proceed clockwise until all the Penguins with abilities have been addressed. Determine which three players have the highest number of Attribute points for that Battleground and award fish accordingly. Repeat these steps for the next two Battlegrounds. Shuffle the Penguin, Attribute, and Present Cards, but discard the Battleground Cards.

Repeat the Draft, Play, and Competition Phases for two more rounds of play.

When three rounds of gameplay are over, the player with the highest number of fish wins.

Why You Should Play Battle Penguins

Battle Penguins is a quick, fun game that’s very family friendly. A loved all of the adorable penguin artwork and so did I. It has some great logic skill building and would probably make a good bridge to preparing kids to play Smash Up. It’s very replayable and with an MSRP of only $10.00, it’s very reasonably priced. I could easily see buying it as a gift for other gamers or kids. It’s worth noting there is a companion game, Battle Kittens, which can be played alone or combined with Battle Penguins. If they make any more games with adorable animals, I’m pretty sure we’ll have to buy it.

A Guide to NPC Diversity in RPGs

Delve Into World Geography With Geoguessr