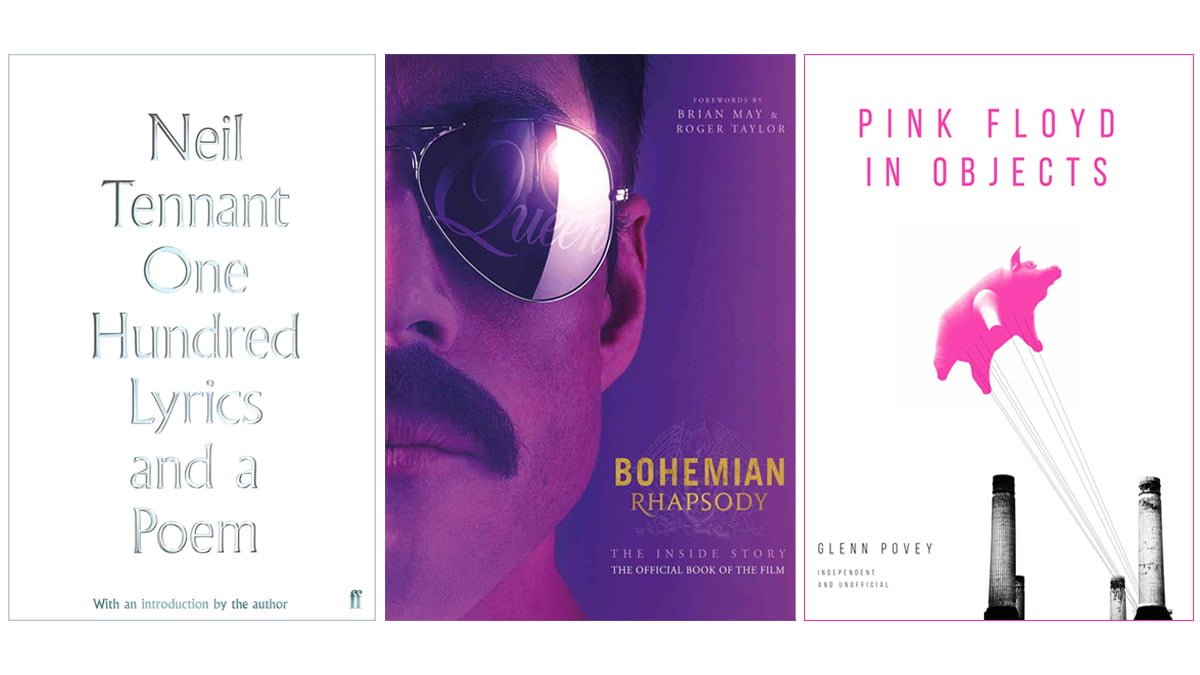 Music is one of Britain’s greatest exports. We have produced countless popular bands and performers over the years from The Beatles to Duran Duran, Coldplay to Black Sabbath. I have recently read books written about and/or by members of three British bands: Queen, Pink Floyd, and Pet Shop Boys, that I wanted to share with you.

Bohemian Rhapsody: The Inside Story

Hot on the heels of the surprise movie hit of 2018, Bohemian Rhapsody: The Inside Story is the book of the film that charts the rise of Queen and Freddie Mercury. The story is divided into six chapters: how the film came to be, Freddie’s story, the cast, the sets, the costumes, hair and makeup, and – arguably most important – the music.

Bohemian Rhapsody: The Inside Story is primarily a photo story and is packed with pictures, both movie stills and behind the scenes images. There are also several comparison shots which show the original members of Queen in situ beside the movie recreation, and it never fails to impress the length gone to get everything just right. I’d have loved to have seen more original photos of the band and locations that were recreated in the film, but that’s a very small criticism.

There’s plenty of other information to support all those images too. There’s an interview with Rami Malek and forwards penned by Brian May and Roger Taylor – Roger’s baring his characteristic cheek in just two words. There are also profiles of all the major cast members including not only the actors portraying Queen members but also those playing supporting roles like Mary Austin, Jim Beach, and Paul Prenter. The costumes chapter naturally focuses on Freddie, yet the others are not excluded because, in order to accurately recreate the band for the big screen, everyone had to be styled and costumed perfectly.

I found the chapter on the sets particularly interesting. The film required an enormous variety of sets to be built, from recording studios to live music venues to Freddie’s home in London, and the effort put into recreating all of these to the smallest detail is exhaustive. Probably the most impressive of all the sets is the recreation of Wembley for the 1985 Live Aid concert and this set gets the biggest page count with a look not only at the practical set build, but the VFX used to populate the stadium with thousands of music lovers.

The final chapter explores the use of music in the film. Queen preserved their history over the decades in shockingly prescient detail, frequently paying out to have recordings made of their live shows and recording all the layers separately during studio sessions. All of this benefitted the film production as it allowed the producers to play with the songs in countless ways and fit them to the story they were trying to tell. This chapter also looks at the incredible work put in by the four actors playing the band who had to not only learn to act as if they were musicians but some of the greatest performers in history. Finally, there is a look at the twenty Queen songs selected for the soundtrack, with explanations as to why these specific songs were selected from Queen’s immense back catalog.

This is a beautiful book that both Queen fans and movie lovers will enjoy.

After the success of Pink Floyd’s Their Mortal Remains exhibition (currently on tour in Dortmund, Germany), the band is once again the height of cool. Glenn Povey’s Pink Floyd in Objects takes advantage of this with a book that traces the band’s history through 100 objects beginning in 1964 and coming right up to 2018.

Each of the 100 objects in the book receives a full two-page spread with plenty of full-color photos and a detailed description of the object’s history and significance to the story of Pink Floyd. Early objects include a ticket to a performance by Syd Barrat’s pre-Floyd band, Those Without, photos taken at a private party when a fledgling Pink Floyd played one of their first shows, and a 7-inch acetate demo of three early songs. As the book progresses chronologically through the years, we get to see a huge variety of objects from instruments to posters, scripts to fan club newsletters, vinyl records to a Ferrari. There are small items like flyers handed out on the street, and entries for huge items that barely qualify as “objects” such as the real Battersea Power Station, complete with flying pig. Some of the more recent entries include a memorial plaque affixed at the university where the band met, the Victoria & Albert Museum where the Their Mortal Remains exhibition began, and a 2018 Nick Mason setlist.

Floyd fans will undoubtedly find a lot to love here and all but the most die-hard will likely learn something new about their beloved band from these pages. Unlike a traditional biography, of which there are dozens to date all treading familiar ground for the umpteenth time, Pink Floyd in Objects allows us to build up a history of Pink Floyd from a new angle, exploring the alleys and pathways which led, seemingly inevitably, to the formation and legacy of one of the most well-known bands in the world.

A well-researched and informative book that fans will devour.

One Hundred Lyrics and a Poem by Neil Tennant

Of the three books included here, this is the only one written by a member of the band in question. Fans of 80s synthpop will know Neil Tennant as one half of Pet Shop Boys, and One Hundred Lyrics and a Poem is a book that, to paraphrase a classic British TV commercial, does exactly what it says on the cover.

After an introduction by Neil in which he talks briefly about his career and songwriting process, the book simply reprints the lyrics to 100 of his songs alphabetically, each one accompanied by a note about its creation, meaning, and history. These notes vary wildly in length and detail. While some songs such as “Legacy” and “My October Symphony” get a full paragraph of frequently fascinating discussion that looks at the song’s creation including historical, political, and social context, many get a single sentence – some with very little depth behind it. When I flicked forward to read Neil’s comments on “You Only Tell Me You Love Me When You’re Drunk” – one of my favorite Pet Shop Boys songs – I found his comment consisted of just four words: “A relationship falling apart.” I could have figured that out just from the song’s title…

Away from Neil’s commentary, having the song lyrics printed together in black and white makes it easy to appreciate their beauty. Pet Shop Boys might sometimes be thought of as just another pop band thanks to their upbeat and highly danceable tunes, but their lyrics took them to another level with songs about social upheaval written during a time when Britain was going through deeply troubled times. Reading these lyrics is like reading a history of Britain for everyday folks in the 80s and 90s.

The single poem at the end of the book ended up being one of my favorite things in its pages. It is short, just four lines, and yet achingly poignant, with words that have stayed in my head since I read it. If you do nothing else with this book, I heartily suggest checking it out for those 25 words alone.

This is a simple book but one that will be loved by both Pet Shop Boys fans, fans of 80s synth pop in general, and those with an interest in the social history of Britain at the approach of the new millennium. It offers a window into everyday life during a period of intense change, right before the dawn of the digital age, and creates a sense of nostalgia for what seems like a simpler, if not necessarily happier, time.