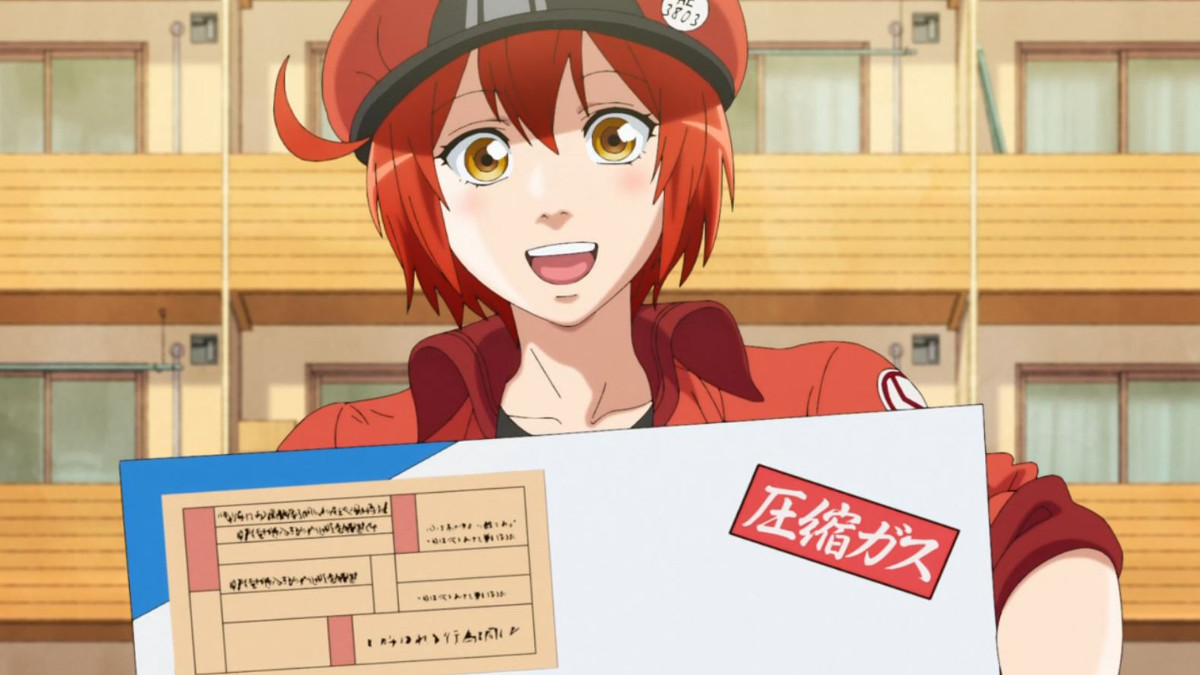 That declaration is pretty much the premise of one of the most educational anime I’ve seen in years, Hataraku Saibō, also known as Cells at Work! Based on a Japanese manga series written and illustrated by Akane Shimizu, this anime television series adaptation by David Production tells the story of the human body from the viewpoint of two main characters—the cutest, directionally-challenged Red Blood Cell ever seen and a stoic, heroic White Blood Cell. The series is packed with humor and action while teaching more about the human body than most public school biology classes.

I sat down to watch the first episode and before I knew it, the whole family was camped in front of it. We binged all five episodes and had a great time. There are currently thirteen episodes scheduled, so we’ll be watching each one as it releases. Let’s do a quick recap of the episodes so far:

We are introduced to the focal characters starting with the rookie red blood cell, AE3803. AE3803 is cute and determined to do her best. She’s delivering oxygen and carbon dioxide when there is a sudden attack by bacteria.

After the White Blood Cell team wipes out most of the bacteria, one escapes unnoticed and lurks around trying to get revenge. (Sounds to me like that crud I picked up at the last con.) As expected, our clumsy Red Blood Cell AE3803 just happens to come across the fiendish bacteria who is ironically also lost as hell. Pneumococcus attacks her and She has a precious moment of bravery where she protects other Red Blood Cells by putting herself in danger. Luckily, White Blood Cell U-1146 shows up just in time. Hmmm…

Although White Blood Cell U-1146 saves Red Blood Cell AE3803, this is no ordinary bacteria, he escapes once more, forcing U-1146 to track him down. Our little lost Red Blood Cell tags along with him and they discover the enemy has found an ingenious hiding spot. I won’t spoil where and how they find him or how they get rid of him because it’s worthy of a good laugh.

I will tell you that at one point, Red Blood Cell AE3803 asks White Blood Cell U-1146 if she will see him again. He tells her no and we all know that he’s wrong. Because anime.

Gives us a peek into the importance of the most darling character in this entire series—platelets. Platelets are depicted as small children due to their small cell size and they are so adorably precious that even the other characters dote on them. This episode begins with Red Blood Cell AE3803 lost again. Another Red Blood Cell helps her and the two are discussing how peaceful things are, which in anime is always a sign that all hell is about to break loose.

That’s exactly what happens—an abrasion occurs which break the skin’s surface. Red Blood Cell AE3803 and her companion are sucked into the gaping hole only to be snatched to safety by our handsome White Blood Cell U-1146. So much for not seeing each other again. He and his buddies are there to battle the bacteria and viruses invading through the wound.

The evil Staphylococcus aureus seems to be winning with wave after wave of germs wearing down White Blood Cell U-1146 and his team. Out of nowhere, the most unexpected heroes arrive on the scene to save the day.

This episode should have been called “Zombie Cell Invasion” because it started with all the hallmarks of a zombie flick:

This was definitely the weirdest lesson on the flu and viruses I’ve ever seen. It starts with Naive T Cell, depicted as a teen boy, patrolling the body when he comes across an influenza virus proliferation. He’s never taken on the enemy before, and he’s completely terrified. Our favorite White Blood Cell shows up to lend a hand, but there are so many of them even he is overwhelmed. That is when we meet Macrophage. Sweet smile, swinging braid, immaculate maid uniform, and a bloody hatchet. She destroys the attacking viruses with a disturbingly cheery demeanor.

Unfortunately, the fighting is too much for Naive T Cell, who runs off feeling useless. He ends up fleeing and runs in to  Dendritic Cell. He confesses his self-loathing and uselessness in battle but Dendritic Cell speaks to him kindly and assures him that he is exactly what they need in battle. This activates him (which looks a lot like a Pokemon evolution) and he returns to the battlefield as an Effector T Cell. He’s cheered on by his team and after a week of battle, it looks like they’ve beaten the flu. Until they discover that another more powerful enemy has invaded.

When a mass of cedar pollen invades, Helper T Cell alerts the body’s systems in an attempt to head off a full blown allergy attack. Rushing to the scene so that he can eliminate the cedar pollen, White Blood Cell runs into Memory Cell. Memory Cell is strangely flustered screaming about some “legend” and imminent destruction. White Blood Cell is confused but the Ceder Pollen Allergens are so numerous that there is no time to figure it out. Helper T Cell orders B Cell to the front with IgE Antibodies. An over-enthusiastic B Cell shows up and starts splashing IgE Antibodies everywhere, causing Mast Cell to increase histamine levels and suddenly Memory Cell’s warnings of doom begin making sense. The situation gets out of control in spite of—or more accurately, because—everyone is doing their job. As the chaos reaches unprecedented levels, an outsider arrives to settle thing with a vigorous show of force and a “take no prisoners” agenda. 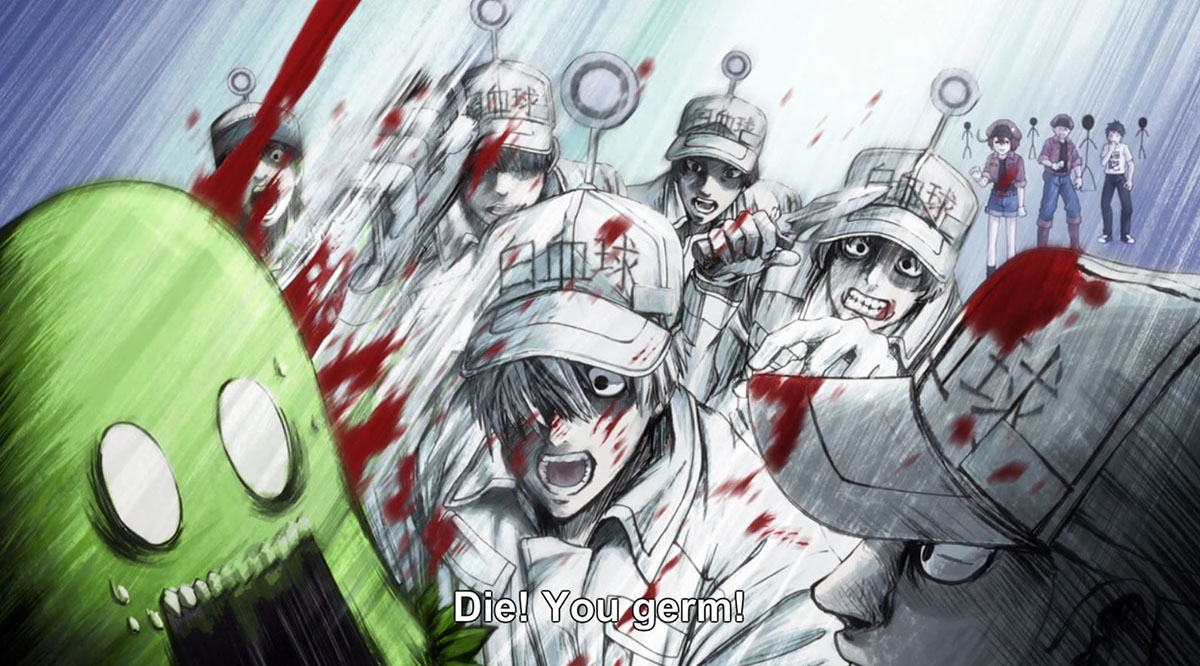 At five episodes in, I’m not bored and that says something. In fact, I’m highly amused by this one and looking forward to the next episode. It’s great, light-weight fun and pretty interesting in the fact that you learn from it.

This is an anime that you can watch with kids in the room. There is definitely a lot of blood—I mean, duh, this is the human body we are discussing. The violence level is on par with your average Dragon Ball Z episode, but it doesn’t take three episodes for White Blood Cell to power up. So, if you are thinking of letting anyone under the age of 8 years old watch it then I’d recommend a parent or responsible older sibling be there—just in case.

As I mentioned in my preview, there are a few comparisons to Osmosis Jones, but I’ve seen both and this is much more fun and action packed. They did a great job dramatizing the inner working of the human body without being cheesy. I will definitely be checking out the rest of the season on a regular basis.

GeekMom Exclusive Interview — Hoon Lee, The Man Behind The Voice Of Splinter

Queens of Comics: My First Ever Women’s Comic Book Club