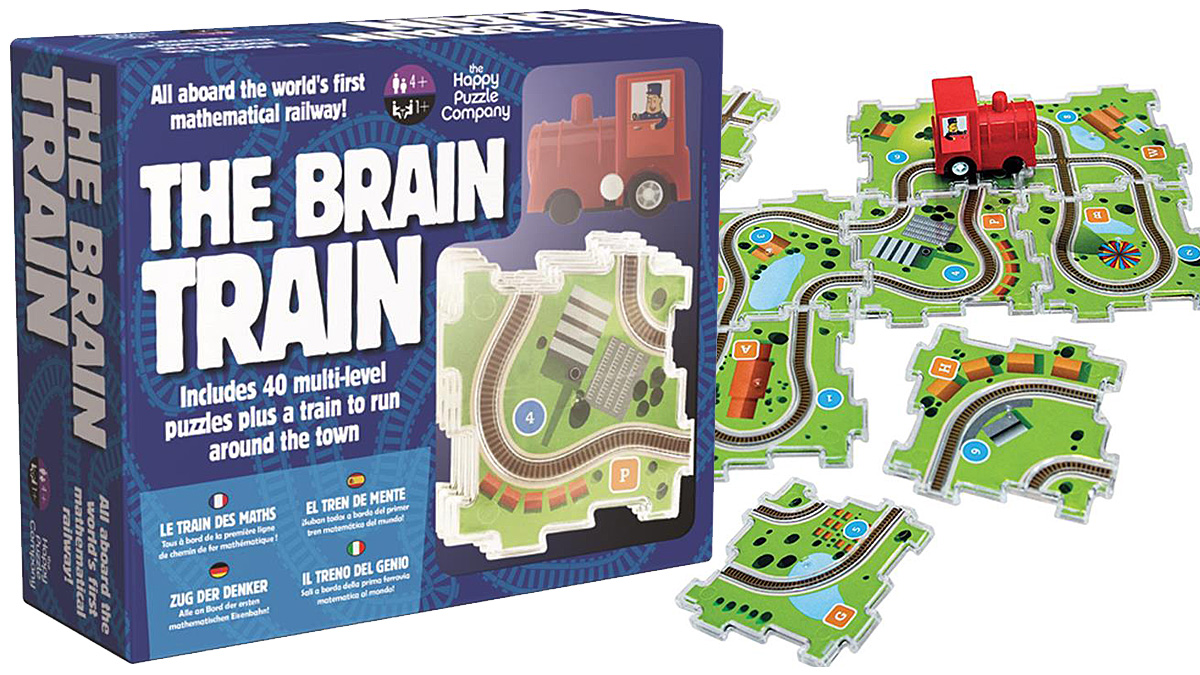 What Is The Brain Train?

The “world’s first mathematical railway,” The Brain Train from The Happy Puzzle Company is an easy-to-understand single-player puzzle game for kids (and adults) aged four and up. Players build railway tracks that adhere to basic rules in order to solve each puzzle and set the little wind-up train on its way.

How Do You Play The Brain Train?

Virtually no setup is required to play The Brain Train. Players select from one of the 40 puzzles included in the booklet in order to play. Each puzzle is presented as a small grid containing four columns and this grid shows you everything you need to know in order to solve the puzzle. An addition type puzzle is solved correctly when the numbers on the Track Tiles total the target number, and the track forms a complete loop.

The four columns in the puzzle grids show:

In the example above we see that this is puzzle number one, it requires two Track Tiles and the numbers on these tiles should add up to three.

Each Track Tile has a number printed on it in a blue circle. These are the numbers which should be used to do the puzzle calculation. Below you can see a completed track which solves the puzzle shown above. Two tiles have been used, the blue numbers add up to three, and the track forms a complete loop.

Naturally, this example is only the simplest of the forty puzzles included in the book. The puzzles are divided into four levels: Beginners, A Bit Harder, Quite Tricky, and Expert. The first two levels contain eight puzzles each, while the latter two both contain 12 puzzles.

Level two, A Bit Harder, is different from the other three in that its puzzles require subtraction rather than addition. For these puzzles, you must subtract the smaller numbered Track Tiles from the largest number in order to solve the puzzle. In the example below, you can see an example of a subtraction puzzle and its solution. Three tiles have been used and the largest numbered tile minus the two smaller tiles equal zero.

If you get stuck on any of the puzzles, solutions are provided at the back of the booklet, and each Track Tile is marked with a letter in an orange square to help you find the correct pieces to make the finished track.

It should be noted that some puzzles have more than one correct solution, and the book only lists one for each puzzle.

Why Should You Play The Brain Train?

The Brain Train is a cute little single-player game with an interesting concept. It’s easy to learn and, with 40 puzzles to complete, there’s plenty packed into this little box to keep kids and adults entertained. The track and train can also be used without the puzzles as a portable train set giving The Brain Train an additional level of play value.

I do have some issues with the game. The train itself is made of very cheap plastic, and the grooves on the track pieces are a bit too shallow, so if the train is wound too hard it tends to go shooting off the track rather than following it—especially considering how fast it goes (that video footage above has not been sped up!). Conversely, if you don’t wind it up enough, it will struggle to get around corners which can get rather annoying after a while—particularly on the larger, more complex tracks. The puzzle book has been printed so that it is larger than the box, which means it has to be awkwardly folded in order to fit inside, and finally, the packaging contains a lot of plastic which could easily be replaced by a cardboard insert in order to make the game more environmentally friendly.

When compared with other single-player puzzle games such as Smart Games or ThinkFun, The Brain Train doesn’t seem to offer quite as much bang for your buck and there’s a definite step down in quality. There are better options out there, but for train lovers, this is a whole lot of fun and it contains plenty of entertainment value for its $20 price tag. 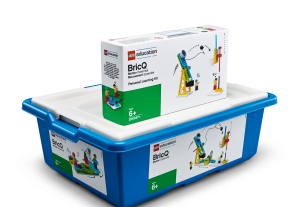 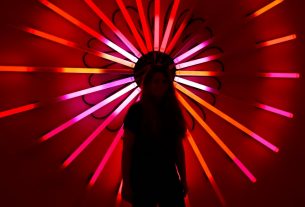 Celebrating Art in Our Own Lives on World Art Day

GeekMom And GeekDad PAX East Panel To Be Live Streamed!