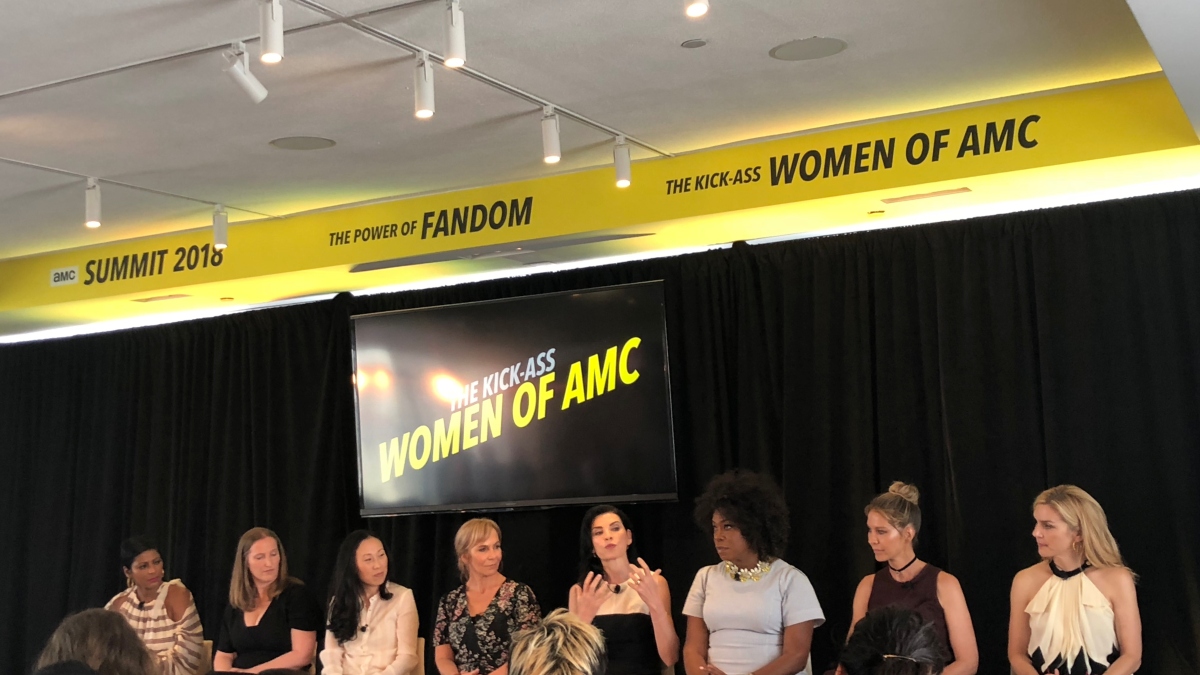 On Wednesday, July 20, 2018, I had the honor of attending the 2018 AMC Summit event. Sitting in a room with approximately 70 press invitees, I squeed internally during most of the first two panel discussions.  When you’re a woman who covers entertainment, it’s pretty rare to get this many amazing women in one place, at the same time, all talking about loving their jobs. At the risk of sounding like a tween-Beatles-fan-from-the-60’s, I found the whole panel amazingly squee-worthy.

Why we need to listen to female writers and show producers?

The first half of the panel focused on Melissa Bernstein, Angela Kang, and Marti Noxon discussing writing and running television shows. Focusing on female executives and off-screen talent provided a unique insight into the television industry. Often, women find themselves consigned to be the token female voice on a panel of men at entertainment panels.

We all kind of know the statistics. However, looking at them in depth makes this panel’s focus on female executives even more important. Of the 250 top-grossing films in 2017, only 18% of the directors, producers, writers, executive producers, editors, and cinematographers were women. Of the 100 top-grossing films, that number decreased to 16%. Listening to Bernstein, Kang, and Noxon felt like a feminist breath of fresh air.

The second half brought in actresses from a variety of AMC shows including Lorraine Toussaint (Into the Badlands), Rhea Seehorn (Better Call Saul), Juliana Marguliees (Dietland), and Jenna Elfman (Fear the Walking Dead).

Over the course of the panel, the women focused on three primary themes.

Patriarchal definitions of womanhood and feminine. As Bernstein explained that the entrenched societal misogyny impacts people’s approach to media. She noted, “there weren’t as many strong women characters [when we were young], and I think that’s affected the way people take in media and take in characters.” Pointing down the line of writers, she told everyone, “This is the front line.”

Noxon interjected a follow-up point about how watching Season 2 of Breaking Bad with her 16-year-old son gave her opportunities to keep saying, “but from her perspective imagine this.” She encouraged any woman with a young man in their life to watch that season to discuss women’s perspectives.

she has to walk into a boardroom of white men over sixty who have no idea about fashion and women, and she has to kowtow to them. You understand her climb…and  if she was a male, she would just be considered an amazing boss. But because she’s a woman, she is a villain because she gets what she wants, and she’s really good at her job, and she tells people to f— off.

The roles that these women play allow viewers, both men and women, to redefine women’s roles in society.

Representation matters. When viewers see themselves on television, the power of fiction allows them to imagine themselves differently.

As the first female showrunner, The Walking Dead’s Kang admitted that

Kang noted that the males are the “damsels” in distress and that it’s really a story that doesn’t require them to hold back telling a “woman’s story.” By changing the way people see women fictionally, television has the power to affect change in reality.

The actresses explained that being allowed to interpret the characters more realistically was freeing.  Rhea Seehorn explained that she enjoyed working on Better Call Saul because “Every step of the way, I’d make a choice that wasn’t as palatable or as ‘likable’ and they’d tell me to go further in that direction.” Rather than being told to be more submissive, she felt confident in her ability to present the character truthfully.

Noxon discussed that the ability to give people representation via her Dietland gave her goosebumps because they trusted her as a director. As she noted, “you’re never your best self for more than a few minutes. Then you go back to being your crappy self.”  This trust meant bringing an overweight woman to the screen and allowing her to find the hero in the anti-hero.

Rather than being forced to present characters retelling the same stereotypical stories, the writers, producers, directors, and actors all felt that they were allowed to be truthful to the complexity of being women. Toussaint shared,

I’m always drawn to complexity or a sketch of a character that I believe I can inject interesting complexity. I love the light and the dark because I think they’re always at war and fighting within each of us. …I love roles where I can really play. The challenges that I give myself in this role. How present can I be? How little can I do? How brave can I be?

The AMC shows and characters offer a variety of identities that, through the power of fiction, allow women to reinvent themselves.

Vet Everyone at Every Level

In the era of what Noxon calls “women are humans,” women not only can, but should, reach out to those with whom they work to ensure a positive work community. Bernstein explained she felt  a key to success, particularly as a woman, was to “vet the people that you decide to work with. Look at who they promote, how they were promoted, how they came up in their work. A lot of female writers, producers, directors look to promote women because…it’s a safe process.” With years of rampant sexism in the media, women can now exercise the option to find people with whom they want to work.

We’re lucky. I mean lucky to be offered roles. … I now also interview the producers who are offering them to me. Do I want to work with these human beings? I’m now at a place where I want kindness. Where I’m safe and where I’m free and where I’m trusted. You must also trust me because my agenda may not necessarily be yours. I bet you anything I’ll take this even farther you envisioned. I ask really tough questions: are you kind? Tell me what makes you kind? What makes you kind on the set? How are your children? Do they like you?

Interviews need to go in both directions. Women new to the industry may feel as though they have no control over their options since roles are few and actors are many. However, in an industry that relies on interpersonal relationships and closed doors, women should feel confident in exercising their right to feel safe.

As a forty-year-old, I have to once again give major props to AMC for having so many women on stage who match my own age. Throughout the panel, the women consistently referred to their ages proudly. The media often fails at providing mature women characters outside the roles of grandmother or dowager. Whether bringing together a panel of seven experienced and mature women was intended, AMC proved a commitment to age representation for women.

Throughout the discussions, many of the women noted their ages as a caveat to their answer. Over and over again, I heard terms like “now that I’m fifty” or “once I turned forty.”  Toussaint noted,  “I was brave in my twenties; I didn’t think I couldn’t fail. Then I got terrifically safe. Then in my fifties, I got brave again because I don’t care.” This response struck me. As a woman who turned what I like to call No-F—s-Forty, I felt a strong connection to the power that comes with age.

With that in mind, I asked a question specific to this point. Mature women are rarely seen in the media. As mature women, I asked, how do they feel about the roles they have? The beautifully spoken Jenna Elfman, responded, “I have courage to express myself. … When I’m on set and in these scenes and literally on every take so grateful to be there… how can I express myself out of a box of my own? How can I bring my experience? For me, I have the courage to bring those to the surface. I feel brave and I want to feel vulnerable. I don’t care about looking beautiful in a shot and I don’t care how close the camera is. I want the viewer to experience my humanity via the storytelling of the humanity of the writers.” (For the full response, please view the video below.)

(For a less abridged version of the panel, despite the terrible camera shots, please click on the video above.)