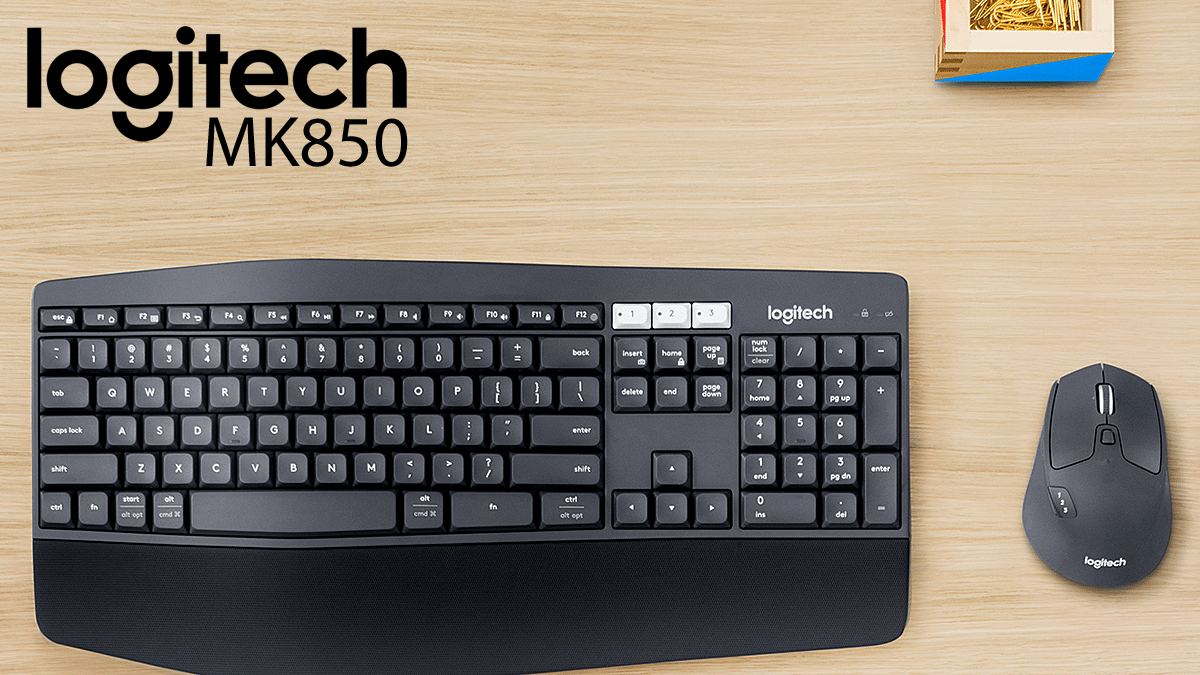 I have spent the last eight weeks using the Logitech MK850 Bluetooth keyboard and mouse to see how they fit into my office space. Keyboards and mice might not be the most exciting purchases when it comes to equipping your computer, but choosing the right one can be key to a frustration-free environment for both work and play.

On first opening up the box, I was very impressed with the overall look and feel of both parts of the MK850. Both the keyboard and mouse have comfortable, ergonomic designs and look clean and modern without appearing to have been stolen from the bridge of the Enterprise, which is precisely the balance I wanted. Installation was very easy on my Windows PC taking less than 5 minutes start to finish, and the USB transmitter is so tiny that it doesn’t impede my access to other ports.

Over the weeks I have spent using the MK850, I have mostly been very impressed with it. The keyboard is comfortable to use even for prolonged periods of writing and not noisy enough to wake anyone else in the house, even when I get inspired in the early hours of the morning and despite my office being right beside two bedrooms.

The mouse moves precisely without jumps, allowing me to work on detailed projects like photo and video editing without frustration. There have been no issues with the keyboard or mouse losing their connection to the computer either, which was an ongoing problem with my previous Bluetooth devices.

The MK850 keyboard allows you to adjust its tilt to three different levels according to preference and it is labeled for both Windows and Mac with some custom mappable hotkeys (admittedly fewer than on gaming-focused peripherals). The F keys double as media controls when fn is pressed down. Both the keyboard and mouse can be paired with up to three devices and both feature easy switch buttons, making it convenient to swap between your computer, smartphone, or tablet in seconds. I also appreciate the LEDs which indicate when a battery needs to be changed – although, with the suggested battery life of 24 months for the mouse and 36 months for the keyboard, I hope I won’t be seeing that come on anytime soon even with many hours of daily use.

Despite all this, there are a few niggles I have to raise regarding the MK850.

Several keys have been removed from the keyboard design including both scroll lock, and print screen (the latter is accomplished by pressing fn + insert, the former by holding fn + home). The mouse is also only designed for right-handed folks so lefties will struggle, and rather than clicking the scroll wheel down to get free spinning, super-fast scrolling, there’s a little button to press that’s set just far enough back to be annoying. The MK850 also comes with virtually no instructions, so this is not a good choice to buy for anyone who needs a lot of help setting up basic equipment. If you want any help you’ll need to download Logitech Options, the software needed to customize both devices.

The biggest annoyance, however, was the sleep mode which activated far too quickly.

To reactivate the keyboard you simply press a button, but this first key press isn’t registered by the computer. This means that I have typed endless sentences missing their first capital letter and have been faced with multiple wrong password screens when attempting to switch my computer on because the first symbol wasn’t registered. Even pausing from writing for a few moments to look something up in a book was enough to trigger sleep mode and Logitech provided no way to adjust how long the keyboard waited before hibernating. Thankfully, after many complaints, Logitech has now released a firmware update which appears to solve the problem. Thank the maker!

The MK850 is a great mouse and keyboard combo now that the firmware update has fixed its greatest problem. At over $80 it’s very much at the high end of the market and I do wonder whether there’s enough here to justify that extra cost compared to so many other highly rated combo products, however, this setup has given me everything I need with exceptionally long battery life, comfortable typing, and precision mouse control. Gamers will want to look elsewhere, but for those of us using our keyboards to type instead of shoot, this is a good-looking, reliable, and dependable piece of kit.