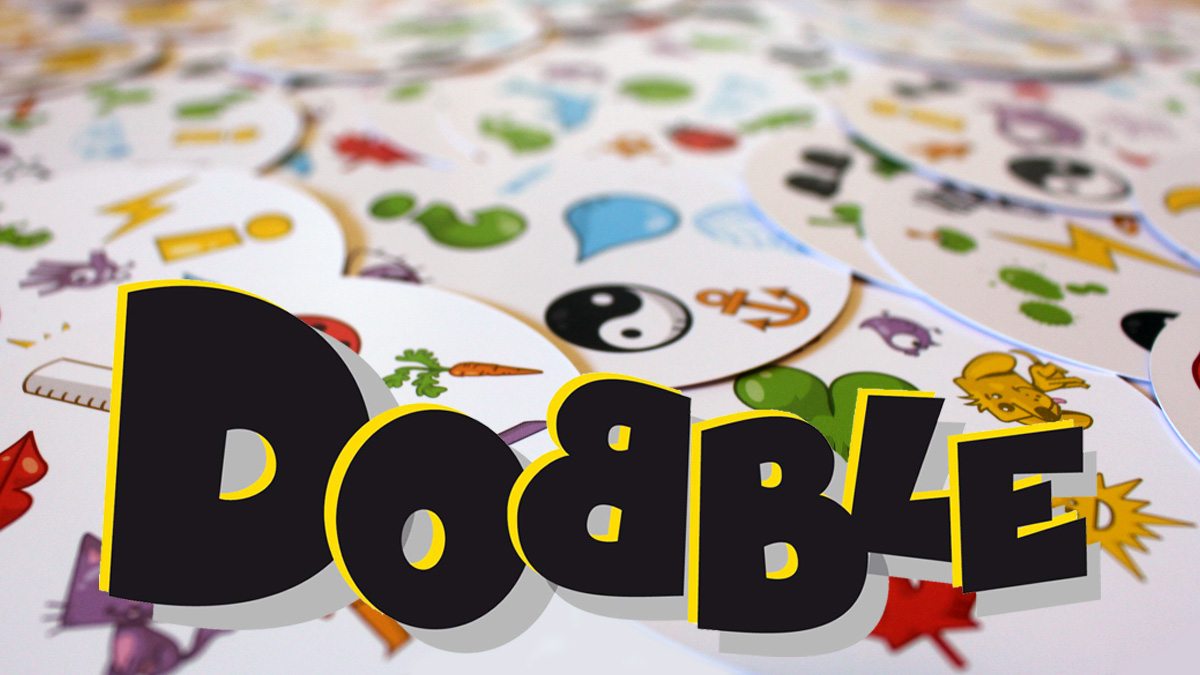 Dobble, otherwise known as Spot It, is a fast, fun, and cheap card game that can be played straight out of the tin. It is incredibly straightforward and easy to learn, making it ideal for all ages to play together, from little ones to grandparents. We played with Dobble original and Dobble Star Wars, but there are many different versions to choose from.

Dobble Star Wars also contains a sheet naming all the different symbols that appear on the cards.

How Do You Play Dobble?

There are several different ways to play Dobble. This version is the first one in the rulebook (called The Towering Inferno) and one that we play regularly.

Take the cards out of the tin and shuffle them. Deal one card face down to each player, leaving the remaining cards face up in a central deck where everyone can see them.

All players flip over their cards simultaneously and study them to find the one symbol that matches between their card and the card at the top of the deck. Every card will have just one symbol that matches. (Don’t ask me how this has been calculated—I’m going with witchcraft). When a player spots the symbol that appears on both their current card and the card on the top of the deck, they shout out its name. The first player to do this takes the card from the deck, which becomes their new active card. The next card in the deck is then revealed and play begins again. This repeats until all the cards in the deck have been won.

Players count up the number of cards they have at the end of the game. The player with the most cards is the winner. As scoring goes, this is as simple as it comes!

Other Ways To Play

There are five rule variants for Dobble included in the rulebook. Another Dobble variant—called The Well—has all cards in the deck except one dealt face down evenly among the players. The remaining card is placed face up in the middle of the table where everyone can see it. Players then flip over their top cards and find the matching symbol. Whoever shouts out their matching symbol first places their card onto the deck, replacing it, and play continues with the new card on top of the deck. The winner is the first player to get rid of all their cards. The other three variants are The Hot Potato, The Poisoned Gift, and Gotta Catch Them All!

Why Should You Play Dobble?

Dobble is one of those games that almost anyone can play. The packaging gives an age suggestion of six plus, but I would say it works for anyone old enough to recognize and say the names of the different symbols on the cards. My mother, who gets flustered over any game rules more complex than Chutes and Ladders, was able to learn how to play it in under a minute in a noisy restaurant. It really is about as simple a game to learn as you can imagine, and given that it can handle up to eight players, it’s perfect for large family get-togethers where you need something that will entertain everyone and which can be learned quickly.

This is a speed game, so folks who don’t enjoy rapid-fire games probably aren’t going to like it, however, I’m one of those people and I still like Dobble because, although it’s fast, it’s also easy so I don’t feel panicked about trying to remember how to do something at speed. Another great feature is its size. Everything you need to play a game of Dobble is contained in the 4″ diameter tin the game comes in, meaning it can easily be slipped into a purse or pocket and taken to dinner, waiting rooms, or on public transport etc. With almost no setup time, you can get right to playing too.

There are many different versions of Dobble including original, Star Wars, Disney Princesses, kids versions (aimed at age three plus with simpler shapes), and even a beach edition, which is waterproof for playing by the water. This means there should be a version to suit everybody. I found that the original was by far the most universal version—everybody can identify a cactus, spider web, or anchor—whereas the Star Wars version is tricky for anyone not well up enough on the saga to easily recognize their Qui-Gon from their Count Dooku. The themed versions are a lot of fun for fans, but stick with the original if buying for a group.

Late to the Game: Formula D