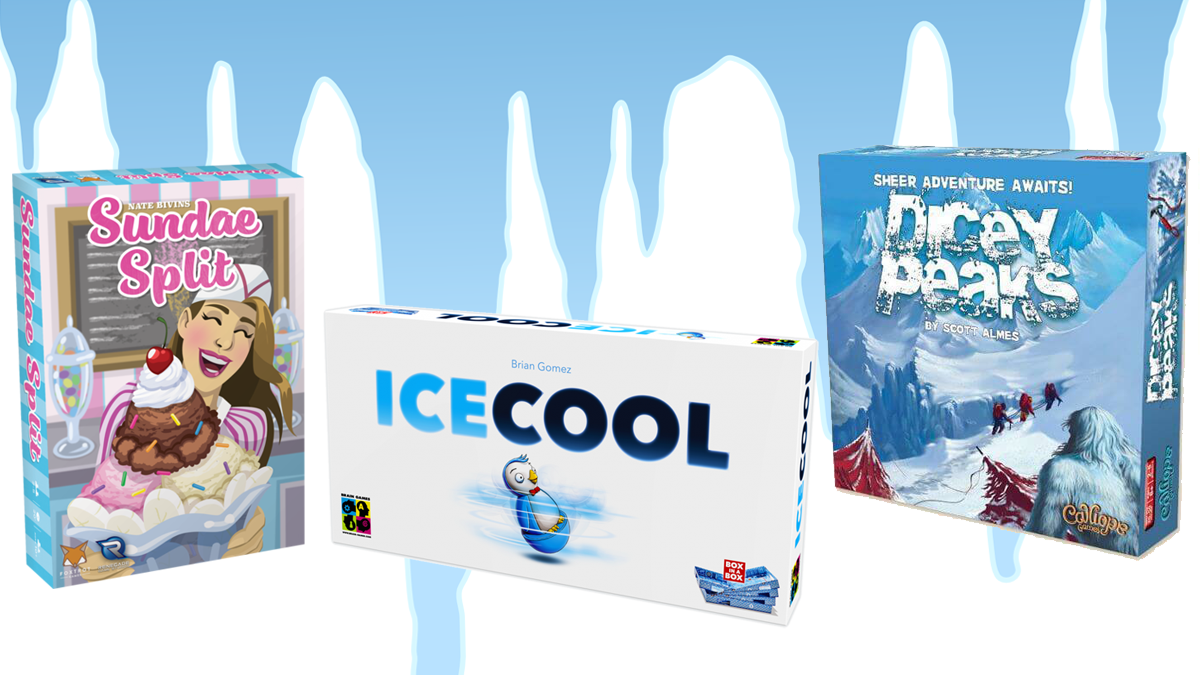 Some of us in the northern hemisphere may have already had too much snow and ice for one year, but for those who haven’t, here are three very different ice-themed tabletop games for you to play while you avoid the real thing outside.

The first of the three ice-themed tabletop games is the one with the most tenuous link to ice – Sundae Split. In this short card game from Foxtrot Games, players attempt to create yummy ice cream sundaes filled with delicious, points-scoring combinations of items while avoiding vegetables, because nobody wants to find broccoli in their banana split.

Sundae Split can be played by between two and five players, and the size of the deck is determined by how many people are playing each game. During each round, one person is the Splitter. That person draws a hand of between 6 cards for a two-player game, and 13 cards for a five-player game. The Splitter then splits their hand into piles so there is one pile for each player. The rules dictate how many cards in the piles must be face up and face down, but these can be assigned any way the Splitter likes.

Once the Splitter has split the hand how they like, the other players get to choose which of the piles they want. The Splitter may have hidden vegetable cards face down in piles, or they may have played them face up to discourage others from selecting a specific pile which contains a card the Splitter desperately needs for themselves, choosing to take the penalty hit in order to get that card. Once all players have chosen their pile and revealed it, the round is over and the next player becomes the Splitter. Rounds continue until the deck is empty.

At the end of the game, final scoring takes place using the following rules. The game comes with a helpful scoring pad to help you work through each item.

Sundae Split is similar to Sushi Go but allows one player to split up the hands of cards instead of all the players splitting gradually and passing their cards along. This does mean the game has a significant amount of downtime. When you are not the Splitter, you have nothing to do but sit and wait for the Splitter to decide how to split the cards, a potential issue for less patient kids. It also means that during a game, you have very little influence over your result. You only get to split the deck once, and in that round, you have to wait for the other players to have chosen before you receive the final pile. In all other rounds, you can only choose from whichever piles remain when play gets to you. For those who enjoy a lot of luck in their games, this won’t be a problem, for those who prefer plenty of thinking and strategy, this is more likely to be an exercise in frustration.

We enjoyed Sundae Split, my eight-year-old son finding it especially hilarious when he managed to sneakily palm off his vegetable cards to myself or my husband. The game is quick, easy to understand, and takes up very little space, which also makes it ideal when travelling. It isn’t the most brain-taxing of games, but if you’re looking for something fun, fast, and easy to throw in your purse to play at a restaurant or on the train, this will be ideal.

Next up in my list of ice-themed tabletop games is Dicey Peaks. This is a mountain climbing game in which players compete to climb Dicey Peak and be the first to the summit while avoiding avalanches and yeti attacks. The game has some similarities to Zombie Dice with dice rolling and risk-taking as key elements of gameplay.

The board for Dicey Peaks is made up of 21 tiles arranged in a triangle shape which leads to the summit. Players move along each layer of the mountain from left to right, rolling dice from a pool to decide whether to climb, or rest and refill their oxygen tank. Rolling pickaxe symbols allows you to climb that many spaces up the mountain, while tent symbols allow you to refill your oxygen tank by the same number. If you try to climb more spaces than your available oxygen you’ll hyperventilate, and if you try to overfill your oxygen canister it will burst. This is referred to as busting and it can also happen by rolling three avalanche symbols or three yeti paws. Busting causes you to lose your turn and play passes to the next player.

Whenever a player lands on a new tile, they flip it over and follow the instructions. This can cause you to move backward or forward along the mountain path, receive bonus oxygen or lose it. Mercifully, there are also some tiles on which nothing at all happens. There are more tiles in the box than are used in a game, so only a random selection are used in any one game, making it much harder to predict which tiles may be left to turn over.

The summit is always made of the three same tiles, only one of which shows the victory flag. A player reaching the summit gets to choose which tile to flip and if they find the red flag, they are the winner. If not, they have to wait there and hope another player doesn’t also reach the summit and flip the correct tile before their next turn. Players cannot replenish their oxygen at the summit so if you run out before flipping the correct tile, you’re out.

Dicey Peaks is a great family game that introduces some basic strategic elements and balances them against a healthy amount of luck. As with Zombie Dice, different colored dice have higher percentages of certain symbols; dark blue dice favor resting, white dice favor climbing, and light blue is neutral. Players can attempt to boost their oxygen by selecting from the dark blue pool, but dice can be fickle, and so they may have to change their strategy after seeing what they roll. Games don’t take long to play either – an average of 20 to 30 minutes in our experience – making it ideal for families.

For a more detailed look at the game, check out Dave’s full review on GeekDad.

The final entry in my list of ice-themed tabletop games, Ice Cool, is possibly one of the most unique games I have played in a long time, and it certainly has some of the most unique packaging I have ever come across. The game could best be described as a variant on the classic soccer game Subbuteo, but instead of flicking soccer players around a pitch, you’re flicking penguins around a school built from ice. Curious yet?

Up to four people can play and there are as many rounds as there are players (except in a two-player game which has slightly different rules). In each round, one player takes on the role of hall monitor while the others play as students attempting to ditch class and eat some tasty fish instead. The student players have to zip around the school, passing through three doors with a fish overhead. Passing through a door adds that fish to your pile and allows the student to take a fish card from the deck. These cards have victory points on them that will be added up later. Meanwhile, the hall monitor chases the students around and attempts to tag them by bumping into them. Tagging students allows the hall monitor to take their ID cards until the end of the round.

The round ends when either a student has collected the three fish tokens of their color, or the hall monitor has collected the ID cards of every other player. At this point, players draw an additional fish card for every student ID they have in their possession (up to four for the hall monitor if they won the round). The next player becomes the hall monitor until the end of the final round. At the end of the game, the victory points on the fish cards are counted and the winner is the player with the most points (or the most cards in case of a tie).

Ice Cool is a very fun, fast game that is easy to understand. Everyone can play, although younger children (and some adults) may struggle with the dexterity needed to flick their penguins accurately. We also found that we couldn’t play more than a couple of games in a row because constantly flicking your fingers against the plastic penguins quickly became painful. Thimbles might be a worthwhile investment if you plan to play a lot, or a least a box of band-aids to wrap your finger with!

For a more detailed look at Ice Cool, check out Jonathan’s full review on GeekDad.