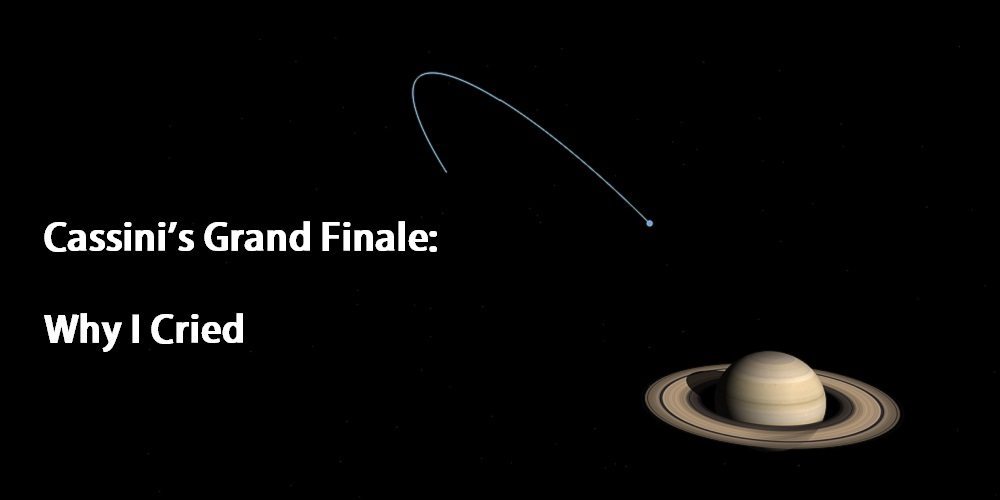 It was only a few weeks ago that the people of Earth watched as NASA’s robotic Cassini spacecraft gave its final transmission before disintegrating in the atmosphere of Saturn.

It was a moment filled with great pride and many tears.

After almost 20 years, the Cassini mission had contributed so much to science, it seemed only fitting to pause and give thanks. In the Canberra Deep Space Communication Centre (Australia), where the last transmission was to be received, I was invited to the “Grand Finale” event with NASA and Australia’s CSIRO. It was a fantastic opportunity to participate in the celebration of scientific research, learn more about the significance of this mission, and appreciate the huge team behind everything Cassini has given us.

From now on, every time your geek kid reads about Saturn they will be looking at photos captured by Cassini. Schools will have to throw out old astronomy textbooks because Cassini revolutionized our understanding of the outer solar system. And anytime some hare-brained, arrogant git thinks the only way to unite the world is with war, WE can point to Saturn and say “NO! The world united in peace and science and a thirst for knowledge and together we sent Cassini THERE.”

Sometime during the mid-1990s, three people met up for a coffee and said “You know that Voyager mission? Hold my coffee; we can do better.”

Okay, so that’s not what really happened but…t is partly true: The Cassini mission to Saturn was one of the most ambitious efforts in planetary space exploration AND it was a joint effort. Cassini was the love-child of NASA, the European Space Agency (ESA), and Agenzia Spaziale Italiana (ASI) in Italy. The mission was further supported by the international efforts of Australia, including the CSIRO (Commonwealth Science and Industrial Research Organisation) and the Canberra Deep Space Communication Centre (Australia doesn’t have its own space agency yet).

Cassini was launched in 1997 with the initial mission to explore the Saturn System. It was a robotic spacecraft, fitted with 12 science instruments to carry out amazing studies of Saturn. We’re talking high-end Optical Remote Sensing, Cosmic Dust Analyzers, Microwave Remote Sensing, and a bunch of others I will be honest I know very little about but can totally appreciate the data they sent back.

Cassini wasn’t a solo-orbiter; originally it was a power-couple called Cassini-Huygens. While Cassini’s role was purely to orbit Saturn and collect data, the Huygens probe descended onto Titan, Saturn’s biggest moon. Now scientists back on Earth have a whole new understanding of Titan. Where Cassini gained long-distance images, Huygens captured the greater detail of what lies beneath the murky atmosphere. For the first time, we saw rivers, lakes, and seas made up of methane and ethane. This composition gives Titan the potential for pre-biotic environments; the potential to someday harbour life.  If anything, the joint effort of Cassini-Huygens has given us even more incentive to study Titan further.

What Did Cassini Really Give Us?

Besides some of the most amazing astronomical images of our time? Well, before you consider this a really expensive photography safari, Cassini has provided over 500 gigabytes of scientific data via NASA’s Deep Space Network.  We discovered seven new moons orbiting Saturn, and extensive new data about two moons we already knew about.

A lot of attention was given to Saturn’s largest moon, Titan. For many years, scientists have been intrigued by Titan’s potential to hold a cold but dense atmosphere. What we were not expecting to find in that atmosphere was plastic. Cassini’s composite infrared spectrometer found small amounts of propylene in Titan’s lower atmosphere, similar to what we use in plastic storage back on Earth. And that was just the beginning. Cassini and Huygens detected the building blocks of cell membranes. Titan is too cold to develop any of the life we have here on Earth but it does have the right environment to develop its own early stages of life suitable for Titan’s environment. What we have here is the opportunity to watch the pilot episode of Life in the Universe.

We have also seen some fantastic details in the composition of Saturn’s rings, including gravitational distortions from some of its moons. And the image of Saturn’s northern hemisphere in the hexagonal shape… that’s a personal favorite.

A lot of this information will be provided in educational materials shared throughout the world but Cassini has already given us so much; there are developments which have a more direct impact on our tech-hungry society. For example, when Cassini launched in 1997, it contained one of the first and most powerful solid-state data recorders. You may know this better as a ‘flash memory device’. Solid-state devices are made entirely from solid materials in which the only moving parts are electrons. Back in 1995, NASA was excited about the expected application of this technology in consumer electronics. I think it is safe to say they were right, and I have the drawer full of USB thumb drives to prove it.

Why Did We Crash Cassini Into Saturn?

Cassini was running out of fuel and posed a high risk of crashing into something out there. Without fuel, Cassini would eventually become space junk and no longer respond to mission operators back on Earth. The great concern for NASA was Cassini crashing on either Titan or Enceladus, both of which have recently been revealed to have potentially habitable or “prebiotic” environments.

To avoid any possible violation of a “prime directive”, NASA chose the safer option of Saturn’s own atmosphere. Safer for the destruction of Cassini; Saturn’s atmosphere disintegrated Cassini within minutes of descent.

The good news is Cassini was still transmitting to Earth right up to the final seconds. This was not the original intent of the mission; Cassini’s primary purpose was a four-year mission to deliver the Huygens module and then orbit Saturn for observation and data. The mission was extended for another two years to include observation of the Saturn’s equinox, and then a further seven-years to include Saturn’s solstice. The data collected from this last plunge into Saturn provided detailed maps of Saturn’s gravity and magnetic fields, revealing how the planet is composed on the inside. It seriously was an opportunity NASA couldn’t refuse.

Cassini’s final signal was received through Canberra’s Deep Space Communication Centre (Australia), where a small party was invited to share in the moment. All of the data received was forwarded immediately to the NASA Deep Space Network (DSN) centre in Goldstone, California (US).

Prior to the demise of Cassini, we were invited into the Command Centre to “see” the signal for ourselves. The powerful 70m Antenna was receiving three different wavelengths of radio waves from Cassini through its Radio Science Subsystem: X, Ka, and S bands. The shorter wavelengths of the X-band allow for higher resolution imagery however it is not as vulnerable to interference as the Ka-band; losing this signal was the first sign of Cassini succumbing to Saturn’s atmosphere.

It was quite emotional watching the first ‘blip’ on the screen. The Grand Finale event was filled with tours of communication equipment, displays of educational exhibits, and discussions with scientists who had spent their entire careers working on the Cassini mission.

It seems ridiculous but most of us couldn’t help feel some sentimental gratitude for Cassini and its amazing team.

Cassini’s mission has finished but the work is not over. Scientists all around the world now have a plethora of data and new discoveries to analyse, with the potential to ignite even more questions about our outer planets. Already we are considering further exploration of Saturn’s moons, Titans and Enceladus, with the hope of a greater understanding of how our own planet became ‘habitable’.

Goodbye Cassini. So long. And thanks for all the pics.

‘Join the Resistance’ With a Thrilling Adventure Middle Grade Series

This One Summer: Beauty in Realism

2 thoughts on “Cassini’s Grand Finale: Why I Cried”