Oh my gosh, you guys. We have stumbled upon the perfect book for little scientists. It is called Oh, Ick: 114 Science Experiments Guaranteed to Gross You Out! by Joy Masoff, author of the best-selling Oh Yuck!.

My oldest son is almost 9-years-old and he is obsessed with this book. It is the first thing he reads in the morning, and he’s fallen asleep with his face on it at night.

‘Oh, Ick!’ is The Perfect Book for Your Little Scientist

This is a perfect book for stealth learning, especially if you have a kiddo interested in science.

When my kids become obsessed with a certain book, this homeschool mom comes up with a plan. When a child is passionate about a certain book or topic, amazing learning can happen with a little bit of planning.

Take the learning to the next level by pairing ‘Oh, Ick!’ with a gruesome game!

One of my favorite things to do, as a homeschool mom, is to pair a fantastic book with an educational game… and I have the perfect game to pair with this book. It is called Totally Gross: The Game of Science and my kids love it.

Totally Gross: The Game of Science is an uproarious game that combines science facts with gross-out challenges. My kids’ favorite part? The slime/booger that you use to move your place on the board! (Yes, there is slime included!) This homeschool mom’s favorite part? As they move that booger, they are learning biology, chemistry, geology, astronomy, zoology, anatomy, and physics!

One day, we cleared our homeschool schedule. We made a few “ick-speriments” including a giant spider web and a cup o’ blood. Then, we had a raucous game of  Totally Gross. We had such a blast that the kids asked to play another fun science game. Later that evening, I left a deck of Professor Noggin science cards on the table. As I made dinner, the kids took turns sharing facts from the deck.

All in all, we had a science-filled and fun-filled day! (If you are looking for more ways to pair fantastic books and educational games, check out my gameschool challenge!)

Now, it’s your turn. Tell me: Does your little scientist have a favorite book right now? Share it here. 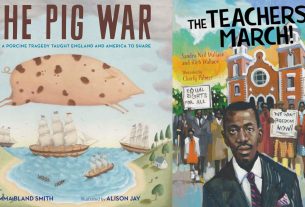 7 Picture and Photo Essay Books to Teach History to Kids

How I Became A Cool Geek Mom