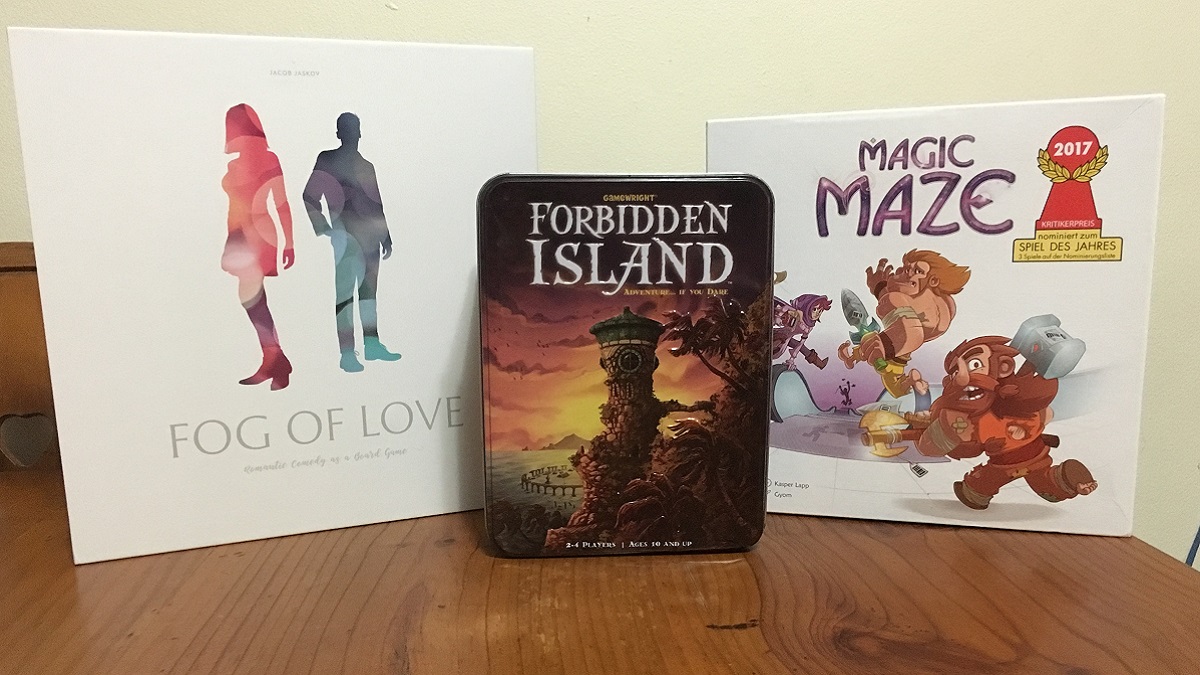 Just so we’re clear, I have a great relationship with my tabletop games. It’s an open relationship, mostly for my benefit. I can play around with other games, like The Legend of Zelda: Breath of the Wild on the Wii U or Pokemon: The Card Game. I can even bring friends’ tabletop games back to our place for a night of fun. My tabletop game collection knows I will always come back to my library. It’s just the way we work.

What I wasn’t expecting was for my tabletop games to teach me HOW to ‘relationship’.

And yet, that’s exactly what they did. Some better than others. Yeah, we all know the benefits of tabletop gaming: “Actions and Consequences; Teamwork; etc etc”. And it is also true, all tabletop games come with benefits. The question for today is:

Which Tabletop Games Are The Best At Teaching You About Relationships?

Disclaimer: These are my top choices. I am always open to a discussion of further suggestions. I learned that from a tabletop game.

Starting with the obvious, Fog of Love is a brand new game released on Valentine’s Day, 2018. Mainly because the creators have a sense of humor. It is the result of a very successful Kickstarter campaign, as reviewed in great detail by GeekDad Jonathon Liu.

Quick Summary: It is a role-playing game for two (2) people, on either side of a relationship. The ‘level’ of relationship differs for each game; it could be First Date, High School Sweethearts, or an ‘I Know What I Want’ (read: I’m too old and too tired from the kids to dance around like this). My one and only Ignore-At-Your-Own-Peril piece of advice is: Don’t take the game seriously. In fact, if you are playing with your partner/spouse/FWB then you need to leave the relationship at the door and embrace the insanity of role-playing in all its ridiculous glory. This game is about your character’s response to scenarios and your character’s goals in life. And they do not always match up with your own.

To help the ‘role-playing’ along, your co-player has a say in your character’s details. For example, EG Dad thought I would be a GREAT stoned Wedding Planner with old-fashioned clothes and a ‘seducing’ scent… I then have to keep these characteristics in mind every time I make a decision or react to the given scenario. Yes, it was as disastrous as it sounds. And hilarious!

How does this game teaches me about relationships: It showed me exactly how bad I am at listening. Think of every ridiculous rom-com you have ever watched. Do you remember laughing at the fictional characters and their complete inability to notice even the most obvious of cues?

Yeah, that’s me in this game.

Seriously though, this is an awesome game for role-playing and creating an experience. It is definitely a grown-ups game, not just for content but for context as well. However, the game is not limited to ‘couples’. It can be played between friends as a fun game for testing the ultimate boundaries of relationships.

For me, when the kids are finally in bed and I need to remember to laugh with my husband, this is the game I’m grabbing.

Probably considered one of the ultimate cooperative games, Forbidden Island is my Go-To Game when I need to remind the kids how to work together. Nothing says ‘Team-Building Exercise’ like an island dead-set on drowning your entire team, one by one. 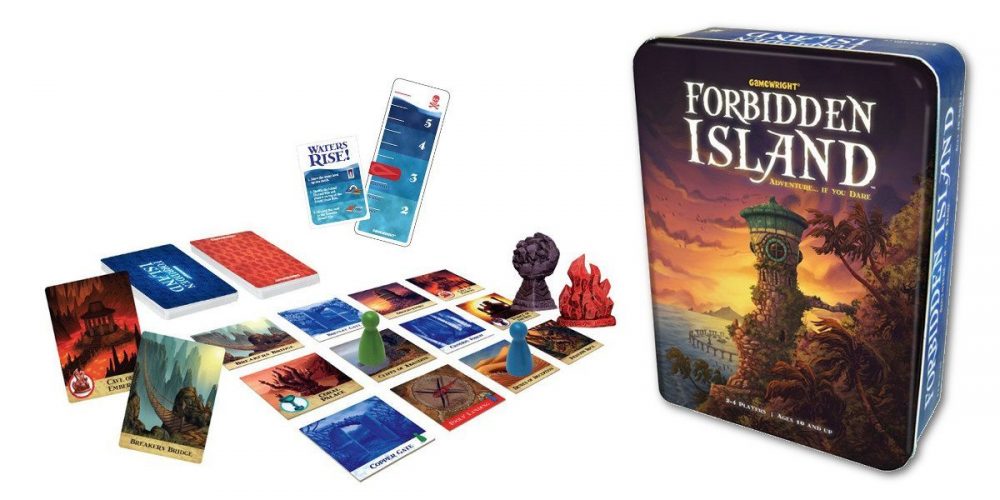 Each player’s turn is followed by The Game’s Turn. That’s right: The Game draws cards and floods various areas of the Island while you are taking turns to explore. The game ends when your team collects all the treasures and escapes (win) … or the Island floods (lose).

How this game teaches me about relationships: This is a genuine cooperative game where you have to communicate with the team and work together when planning out your next move. Great communication is being able to plan a few moves ahead as a team. If you run off ahead without your teammates, you will miss the opportunity to capture the treasure or miss the rescue helicopter or miss the colleague now drowning. Yeah, that’s a bad thing. But to be completely honest, all of this balances out when you learn how to communicate with your team. The first time you beat the island is exhilarating. Strange but true.

This is a new game in our library; it still has that “new game smell”. It was a gift from my sister-in-law and, after reading the premise of the game, I honestly thought she was trolling me. The game is to be played in silence. Oh yeah, it’s real. And it is … possible. And kinda enjoyable.

Quick summary: Four heroes need to be guided through a Mall… well, they need to break into the Mall, raid their favorite stores for items and then escape. This game is not limited to four players, nor do you need to choose a character to play. In fact, you don’t even have to wait your turn because everyone plays together at the same time.

Every player has a specific ‘move’ they are allowed to make; move North, move South, explore a new area, ride an escalator. Any move can be made at any time to any character able to do so but only by the player allowed to make that move. And here’s the extra kicker: all the moves are made in silence. So when you see a move to be made, you can tap TAP TAP the “do your move” piece but you are not allowed to say “hurry up and do your bit!”.

If this intrigues you, head over to GeekDad Jonathon’s review. 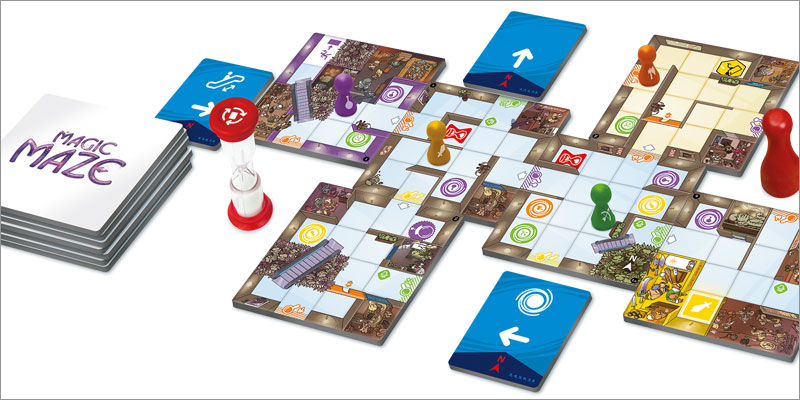 How does this game teach me about relationships: To play a cooperative game in silence, you need to know how to communicate with people (funny, that). Everyone needs to know what everyone else is doing. Which means you are watching everyone and assessing how you can work with them.

There are a few moments in the game you are allowed to talk and communicate but they are short interruptions to the game. In all honesty, playing the game in ‘real time’ with no talking is a great way to encourage all players to contribute. It really encourages you to look at your team-mates as productive equals. There is an awareness you gain from your fellow players. And for me, anything that reminds you of the positives of a person is a great tool for relationship building.

As always, these suggestions are open for discussion. As I write this, I am coming out the pointy end of school holidays with three spawnlings who are still recovering from a long-school term filled with new schools, hospital visits, and unexpected adventures. Any game that encourages positive relationships within the family is a good thing! I can vouch for the above three games from my own personal experience. If you have more suggestions, add them to the comments below!! 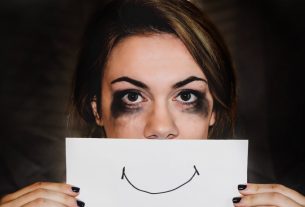 Here School Starts in Two Weeks, and Parents are Not Okay

1 thought on “Best Tabletop Games for Building a Relationship”