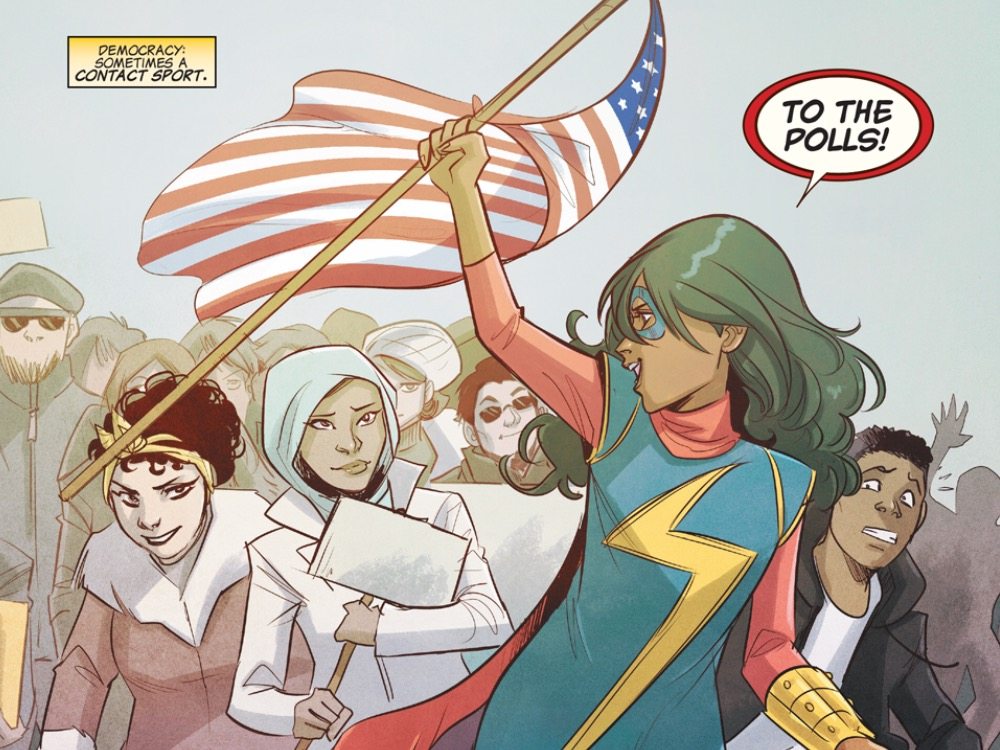 Growing up, all any of us want to be is a superhero. We look around out world and think to ourselves, “But, I can’t fly. I don’t have laser eyes. I don’t have super strength.” The thing is, we all have superpowers. We can all vote.

It doesn’t matter what side of the political aisle we stand on. Right, left, middle, red, blue, purple. We are the villains in our country’s story.

The thing is, we have the power to be the heroes.

Listen to Ms. Marvel’s message. Many of American choose not to vote because they see it as protest. This is not a heroic act. It is an act that demeans the concept of compromise. America was founded on the notion of compromise, yet today we refuse to see it as a bold act of heroism and revile it as “selling out.”

Listen to Zephyr. Every vote matters. You don’t think it does, but she’s right. My vote and Bill Gates’s vote have equal weight. The evening of the playing field matters. Choosing not to vote devalues our entire process.

We need to know our rights. It is against the law to be kept from the polls. If you are afraid to assert your rights, contact your local ACLU branch.

Be a hero and help others. If you see people harassing voters, stand up for them. Be a hero and stop bullying.

We can be the heroes. We don’t have to agree. The Founding Fathers didn’t agree. They learned how to be heroes by compromising and by listening to each other and finding common ground. That common ground exists.

Go out this Tuesday and vote. Vote for whoever you want. Vote for the lesser of evils. Vote against someone. It doesn’t matter as long as after we vote, we come together and build our government by creating alliances with each other and respecting each other regardless of the outcome.

A Treasure Trove Of Recipes from MyRecipes