MegaCon in Orlando, Florida, is the Christmas present you take a year to carefully plan, wrap, and hide, and then in a matter of seconds, it’s all over. This year, it was a bit different thanks to Fan Expo buying it out last year. The difference between it being a corporate owned entity was obvious to seasoned MegaConers and I have to say, I’m happy with what they’ve done with my favorite convention of the season. So without further ado, here we go with my favorite moments and changes to MegaCon this year.

Ease of understanding what was where!
This year was by far the best in terms of organization. From the moment you entered the convention center there were signs telling you which way for tickets, prop check, and if you had a badge where you could enter. All doors had security looking for badges so no random person could just walk up and go in. This attention to detail kept the halls clear for convention attendees.

He is Batman. He is Kevin Conroy!
Kevin Conroy (voice of Batman in numerous video games, movies, and animated features) is by far one of the nicest people I’ve met. He’s humble, friendly with all his fans, and takes the time to meet and talk with each one. At his panel, he took each question seriously and gave a full-hearted response. It was fun to learn about how he came about in the role of Captain Sunshine and why “fun” isn’t the word he would use for game recording. He also gives great hugs (in case anyone is wondering).

Epic Photos – Compassion Goes A Long Way
While the actual time in the booth took less time than saying my first name, I will say that the staff at Epic Photos deserve a round of applause. On Sat in the midst of having a panic attack, I approached customer service about refunding my photo op with John Barrowman (Torchwood, Arrow) on Sunday. I explained my anxiety situation and told them I wasn’t sure I would be okay to enjoy the experience the next day. The customer rep listened to me and with compassion in her voice told me they could accommodate me because anxiety is covered under the Americans with Disabilities Act. She instructed me to tell the volunteer at my photo op area that I had an ADA issue and they would take care of me. Thanks to her kindness, I got the photo I had been anxiously awaiting for months without added anxiety.

Artist Alley
Knowing I would be in trouble if I spent too much time in Artist Alley, I saved it for Sunday. My friend Jim and I walked each aisle and despite a few tugs at my wallet, I walked out only spending around $20 on a print and a CD. I could have easily spent over $200 on all the awesome art I saw. I picked up some business cards though so I could grab a few things later, like the “Bittens: Cheshire” print by Gravenwolf Studios I have my eyes on.

Steampunk Debut
My steampunk debut was welcomed with open arms by many a costumer who stopped me in the halls. I think the part that most people enjoyed was when I showed them how everything was functional and had a purpose. My Apple Watch bracer was a hit and saved me from pulling out my phone every time my brother found a cool vendor he wanted me to check out.

501st Legion Nerf a Stormtrooper
The 501st Legion raised $817.39 for the Leukemia and Lymphoma Society with their shoot a stormtrooper with a Nerf gun event. It was fun watching my husband dance around and children still get a good hit on him with the Nerf guns. A big shout out to Makaze Mom for all the work I know she put into manning the area. It was greatly appreciated and without it, I doubt the Nerf area would have made a quarter of what it did.

Blogger Meetup!
I meet my second GeekDad at MegaCon, Skip Owens, as well as fellow blogger, Epbot! I ran into both kind of by accident and loved chatting with them for the few moments we had. I’m not sure which was more exciting, though: finally meeting my fellow writers or taking a selfie with Epbot’s husband John and Figment. I think it’s a tie on that one.

Cospital
Nobody wants to have a cosplay emergency, but when you do, you’ll be happy that the nurses were on duty at the Cospital. This group of cosplay repair volunteers got upgraded into their own room this year and from the line on Saturday, they needed it. My husband was unfortunate to need their assistance on Saturday and we were very happy for their help (and after he burned his hand on a glue gun, we were happy the regular first aid wasn’t far down the hall).

Kids Lounge
The kids area gets the award for “Most Improved” this year. Instead of a small area with LEGO bricks to play in, they had an entire room with everything from crafts, to LEGO, to their own costume contest. It was a spacious set up with plenty of seating for adults to relax in while their children occupied themselves with the various activities put out for them. 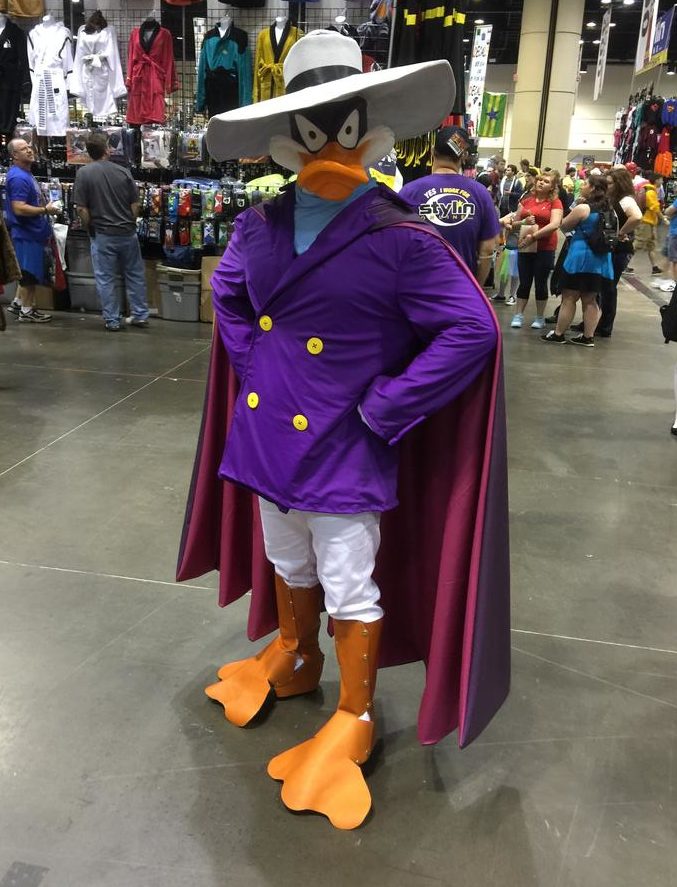 Cosplays From Around the Galaxy
This year I saw a lot of awesome cosplay. Two of them stick out the most. The first is Darkwing Duck and the second is Dreamfinder and Figment. This was the first of both cosplays I had seen at Mega and I was happy to catch them in person. I find the hardest part of any cosplay can be the shoes, and after checking out Darkwing’s I have to say he nailed it. I could have taken Figment home with me he was so adorable (and by far better than anything Epcot has).

Did you miss MegaCon Orlando? Not to worry. For the first time, MegaCon will be making a stop in Tampa from October 28th thru October 30th. So far they are advertising that none other than David Tennant (Doctor Who), William Shatner (Star Trek), and Karl Urban (Star Trek Beyond) will be in attendance. If any of these amazing actors float your boat, stay tuned to Facebook for more information on ticket prices and other guest news.