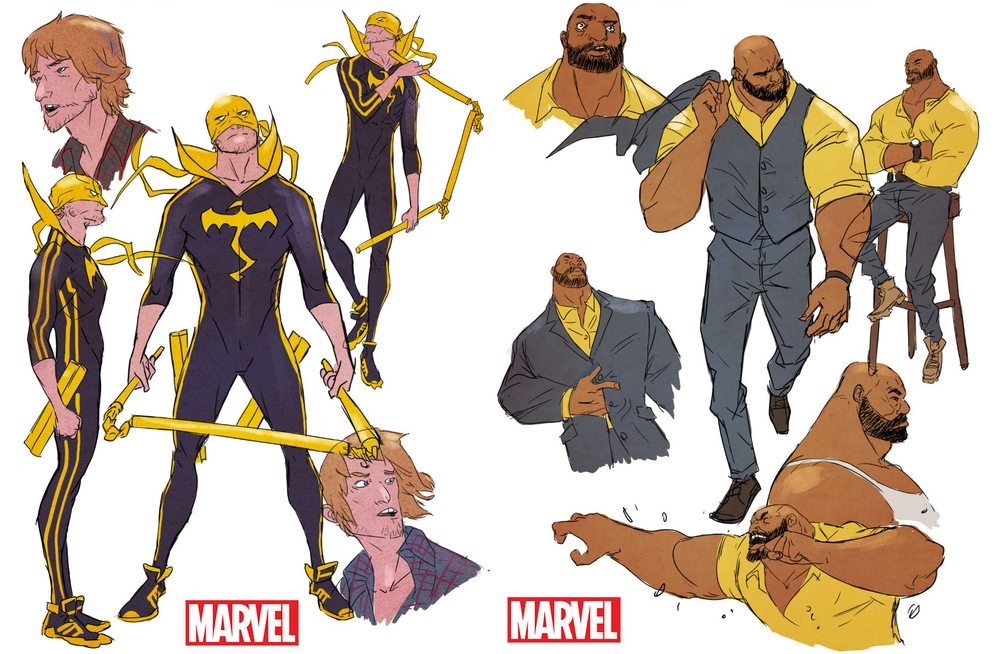 Sweet Christmas, the new Power Man and Iron Fist is a great comic.

It’s well written. It has this sketchy, scrawly, bright art that suits the characters and the story perfectly and is a lovely departure from the uber-clean, super-perfect style prevalent in most of Marvel’s books at the moment (not that I mind the latter, I don’t, but you know, art and stuff). Danny Rand is a naive, lovable doofus who punched a dragon and still has issues navigating reality. Luke is an excellent foil, steady, stable, and conflicted, wanting to do right both by his family and by the world, content to settle down but unable to deny a lust for hero-ing.

Also prominent is Jessica Jones, also a hero, a private investigator, a mom, and Luke Cage’s partner. She isn’t entirely thrilled about the Heroes for Hire reunion. Her reason for being dubious is entirely reasonable: Danny, who she really doesn’t hate despite his frequent lamentations to the contrary, has a way of finding trouble and convincing Luke to dive in with him. Which is fine for Danny, who doesn’t seem to have any other responsibilities, but not so much for Luke, who does. Also, when you love someone, it seems perfectly rational to be concerned said someone is going to get hurt or, quite possibly, dead and to ask them to be cautious in participating in said activity.

According to several articles I’ve read since February (and I apologize, it’s been a while and because I was annoyed at times of said readings, I forgot to save links/sources), Jessica voicing these concerns makes her a “nag.” And as far as I can recall which, in fairness isn’t always very far, the majority of commentaries did in fact, use that word.

Let’s review the history here, shall we? Jessica and Luke encountered one another on a few occasions but first spent a period of time together body-guarding Matt Murdoch. They started out in open conflict. They really didn’t like one another much. Jessica, a trauma-survivor, was holding herself together by drinking heavily and punching stuff, barely functional due to the horrors inflicted on her by the Purple Man. Luke was surly and angry and also handling his emotions by punching things (the wife thing is a TV retcon). They slept together while Jessica was dating Scott Lang (Captain Marvel set those two up, BTW) and Jessica got pregnant. They fought all the time. They were nasty, sometimes cruel to one another.

Now? Now they have a home. They have a stable family. And, instead of drinking and beating people up when she’s angry, Jessica uses words. She explains to Luke why she’s uncomfortable with him doing certain things. Why she would prefer he didn’t. Why she takes issue with Danny’s disregard for Luke’s other responsibilities and why this is problematic and, quite frankly immature on Danny’s part. Jessica is setting limits based on discussions she and her husband have had and refusing to give on limits they’ve both agreed to when Luke is clearly, if not lying, then at the very least evading.

And this makes her a “nag.”

If she were screaming at him? Drinking? Punching? She’d be irresponsible and “bitchy.” If it were Luke doing the talking and Jessica out adventuring with Danny? Then we’d be hearing that she’s a bad wife. A bad mother. That she’s selfish for putting what she wants head of her family. That Luke is mature, a good guy, long suffering because he’s “putting up” with his wife’s antics.

Are we seeing a problem?

I certainly hope so and it isn’t Jessica being a nag.

It’s the persistent double standard in our society, one that puts women in conflict with society at large, with their partners, their families, themselves. The one that creates a situation in which we can never be who we want to be because no matter what we do, we’re doing it wrong. The one that creates a world in which we can be anything we want. Except that. And not if we do it that way.

But, Shiri, you may be thinking, this is the comics world. It isn’t real.

First of all, that doesn’t make it okay. In fact, in makes it, in a way, even more not okay because if comic book world is a place for us to live out our fantasies, then it should be better than the real world, not stuck in the gender swamp of Ancient Greece.

Second, you want real world? I shall oblige.

I’m going to pause here to clarify that what will follow is not a political statement or endorsement; it’s a social commentary. If you want to talk politics, feel free to ping me off-site. It’s unlikely I’ll respond because I don’t even talk politics with my friends most of the time, but you never know, I may be feeling soap-box-y that day.

If you want a real world example of the double standard, you need look no further than the current presidential race. Leaving Trump out of it, let’s examine the way Hillary Clinton has been portrayed in the media versus the way Bernie Sanders has.

Being male, it’s accepted of him. We can overlook it because of the “good he’s done.”

But women? Women are either virgins or whores and someone decided, somewhere along the way, that Hillary Clinton was a whore. So instead of looking at all the good she’s done, we’re focusing on the shady bits. Has she made mistakes? Oh, yes. Has she made deliberate decisions we may not like? Absolutely. Do I think she’s squeaky clean? No, in fact, I’m quite sure she isn’t. But I reiterate: Sanders isn’t either and if you were, “in the room where it happened,” I doubt you’d be quite so enthusiastic about his record. Can you still support him? Sure. Still wish you could vote for him? As much as anyone else. But his plumbing shouldn’t give him the advantage, shouldn’t earn him the screen, shouldn’t make his backroom BS anymore acceptable than Ms. Clinton’s. To quote Hamilton once more, you can, “Hate the sin, love the sinner.” Just make sure your standards are the same regardless of the biology of internal and external genitalia.

When Ms. Clinton speaks out passionately, emphatically, she’s rude and loud and horrible. When Sanders does it, he’s a revolutionary. If she dared interrupt him to make a point, she’d be a loudmouth. When he wags his finger at her and speaks over her, he’s fighting the good fight.

Are we starting to see that the double standard isn’t only a problem in comics? I hope so.

If Clinton was doing now what Sanders is, refusing to step aside “gracefully,” refusing to do what is best for the country, she would be lambasted. She would be derided for “pouting” or “sulking” or “nagging.” She would be, in short, a “bitch.” But because Sanders is a man, and one past middle age, and white, he’s “continuing the fight,” “refusing to give up.” He’s a “hero.”

You can’t have it both ways, folks. Either you’re a progressive who believes in equity or you’re not. You don’t get to spout liberal as hell dogma one minute and then fall back on ancient social conventions when you don’t get what you want.

If you’re Hillary Clinton, or Elizabeth Warren, the other former darling of Sanders’ supporters, who dared endorse Clinton over their objections, you keep your mouth shut and do as you’re told or you’re a whore.

Have I made my point?

I’m not telling you to stop throwing shade. I’m just suggesting that you may want to examine who you’re throwing it on and why. And that, perhaps, if you notice it’s extending more one way than the other, either do some trimming or move the tree.

Let Ms. Clinton have her say. Let her do her job.

And let Jessica do the same. 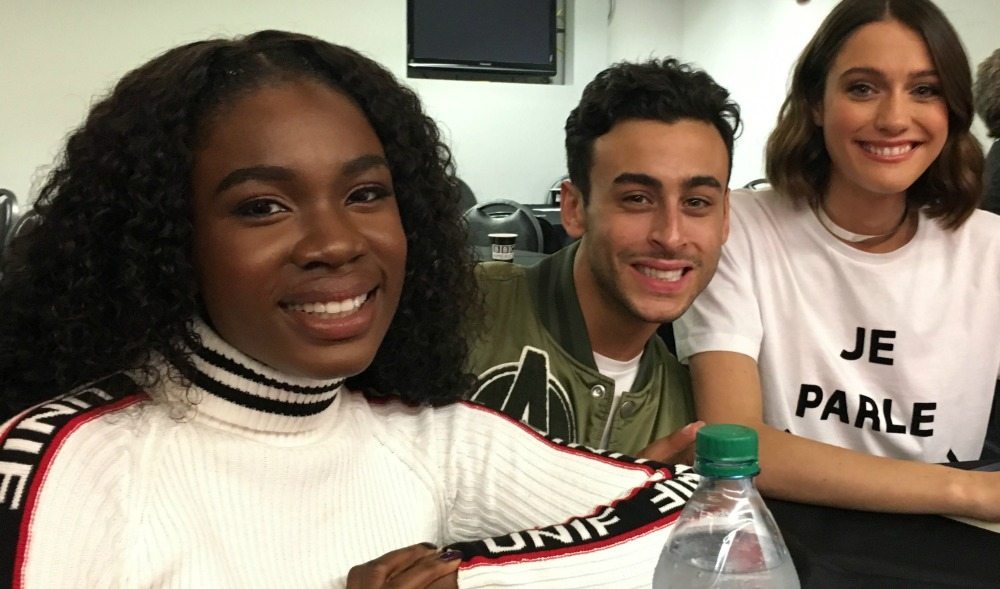