My husband always stumbles into these conversations, innocent in his observations.  Surely he meant no harm. One comment that, for the first time in a long time, had me questioning myself, my history, and my own reality.

He made just one comment that, for the first time in a long time, had me questioning myself, my history, and my own reality.

Wait, go back to that. I think you might be right… Wait, WHAT?!?

Suddenly, in the midst of my 40s, reveling in my “geekness,” taking pride in raising my children to follow “the way of the geek,” I was blown back by the realization that I may just, in fact, be (gasp!) an imposter! No way! Not possible! I mean, wait; was it?

My husband looked at me with eyes that said, “Oh, no, what did I just say?”

“What?” He was hoping for an innocent out.

I honestly think the conversation ended here. I think maybe I may have blocked it for an instant and just left the room.

It definitely got me thinking, though. I mean, in the midst of it all, to be completely and totally honest, being a geek back in the ’80s was not NEAR as cool as it is now. The truth does remain, however, that current geek reigning champions hold a claim to the title because they WERE geeks back then.
They suffered the ridicule big-haired-neon-wearing-lovesbabysoft-wearing girls lobbed at them. They hunkered down for the hallway taunts volleyed by big-shouldered-leather-jacket-wearing guys. They were in the trenches! Where was I, you ask?

Oh, hey, now that I think about it, that’s me, in the middle… with the big hair and miniskirt, but hanging on the edge of the theater group. Oh, there, again, there I am, being dropped off in my mother’s Mercedes. AND again… well, no, I DID go to prom, with a date; and the Christmas dance; and the Sadie Hawkins…

Well CRAP. My husband was right. I was not a geek OR a nerd. I have been living a lie!

All this time, when fellow “geeks” argued about “the book vs. the movie” or “Who is the BEST Doctor” or “Star Wars or Star Trek,” I was trying my best to keep up, all the while in denial of the fact that I just don’t know! I mean, I care. If we’re going to have an argument about Star Wars or Star Trek, I totally care. I’m the most caring non-informed nerd/geek there could be! If we’re measuring geek worthiness by whether or not someone cares, well, I’d be right up there.
But as a “late-blooming” or “middle-of-the-road” geek, do I have the right to claim the title?

I mean, sure, there are so many different categories of geek. Maybe I’m a homeschooling geek, dedicated to making sure my sons learn STEM, STEAM, and everything else they need to be equipped with for nerdy success.

Or, maybe I’m a photography nerd. I surely am excited when a new lens shows up on my doorstep.

But if we’re going to go there, then consider this… Could we not say the same thing about ANY person who holds a healthy obsession/interest in something?
So can we call the guys arguing about football on Sunday afternoons “geeks”? By that token, what about women who spend so much time poring over breastfeeding books, going to La Leche League, and baby-wearing groups on meet up? Are they “geeks”?

Maybe, in my exuberance to BE a geek, I’ve created my own FORM of geek.
I mean, sure, I won’t be able to go toe to toe with you if you’re going to argue with me about Munchkin vs. Cards Against Humanity. Nor do I even understand the rolling of dice on a Friday night between a group of friends. (Granted, I rolled. I rolled, and I made things up, but all the while I kept thinking I was in the wrong place!) If you ask me how I feel about JJ Abrams, I might recognize the name, but that’s about it. Show me an image of a 3D printer, and I might think it’s a new-fangled microwave oven. Take me to a lecture about Balrogs, and I’ll have to leave the room. But ask me to learn something new, to help my kids achieve their nerdy endeavors? You got it! Ask me to learn to solder so I can fix my remote control? I can figure that out, as well. I think.

Maybe there’s no definition for what I am.

Maybe I’m making up my own rules about geekdom along the way.

But then again, aren’t we all?

App Review: All Aboard the Toca Train 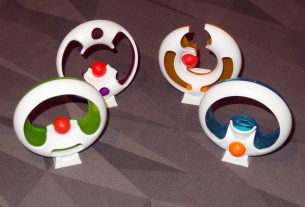