Yes, this comic book intended for grown ups, which has been around for 25 years by the way, is all of a sudden being “discovered” by fans of this new, profane sensation, causing juvenile giggles from young adults, and an endless Advil jar worth of headaches from parents like me who have to say “not ’til you’re older…much, much older.”

No matter what you think of this movie version of the Merc with the Mouth, there’s one thing people keep over looking: Wade “Deadpool” Wilson is quite the imaginative little artist.

I have a lot in common with Deadpool in this respect. Doodling and drawing are a form of therapy for me, and I even advocated the practice in one of my first GeekMom posts, “A Few Jottings about Doodles,” a while back.  It certainly was therapeutic for Deadpool, who somehow managed to carry crayons on his freelance stake outs for big mean bad guys.

Without giving away too many spoilers for “big boys and girls” who haven’t yet seen the movie, I’ve provided some fun little Highlights for Children-worthy drawing tutorials based on Deadpool’s favorite pastime. Besides the obvious one.

First, let’s draw the most popular doodle; the one of him attacking a Ninja even those who haven’t seen the movie will recognize from the trailers:

Everybody got this one? Good! Now, let’s dig a little deeper into Deadpool’s subconscious for this little unicorn image, which moviegoers will remember from one of the film’s more tender moments:

Finally, Deadpool loved to break the fourth wall to let the audience in on his jokes, and this little doodle helped make that happen during the end credits. Draw this one on a red piece of construction paper. We’ll call him “Redpool”:

Whether or not you approve of Deadpool’s other personal habits, or hygiene, I hope kids of all ages follow his lead, and put some pencil and crayon to paper. Work out your frustrations, celebrate your dreams, face your fears, and outline your goals through doodles and sketches.

Trust me, it works a lot better than attacking someone with a pair of katanas and a zamboni. 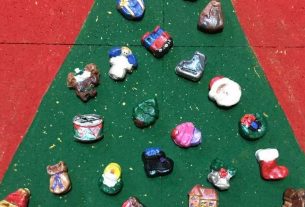 The Waiting Is Over: Downton Abbey Season 2 Airs Tonight!