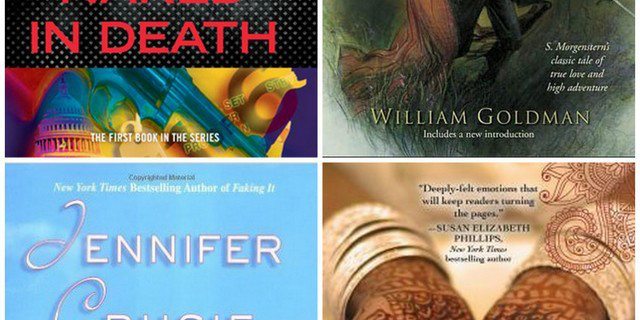 Whether you’re celebrating Valentine’s Day this weekend or not, romance is in the air. It’s cold outside, so it’s a great time of year to heat things up inside. Here’s a list of books that run the gamut from romantic to sweet to full-on sexy.

Anna and the French Kiss by Stephanie Perkins. This one is actually a YA title, and a fairly chaste one at that. But it is incredibly funny and on-point about what it’s like to be a teenager with a crush. High school senior Anna is suddenly shipped off to boarding school in Paris, and she thinks her life is over. Until she meets Etienne St. Clair, a gorgeous fellow student. She spends the year almost falling in love with him and learning all about French cinema, until she finally gets the French kiss of her dreams. Incredibly charming.

Bet Me by Jennifer Crusie. Crusie’s most popular romance is still one of the great contemporary romance novels. It’s really a romantic comedy. Min Dobbs and Cal Morrissey start their rocky relationship with a bet. Her ex thinks Cal won’t be able to get her into bed, and Min decides to string him along to prove a point. But even though they seem terribly mismatched, there’s more going on there. Food, matchmaking, great humor. A great, lighthearted love story.

A Bollywood Affair by Sonali Dev. Mili Rathod has left India to study in America and become the perfect wife for her husband–whom she hasn’t seen since she was four years old. Married off as a child bride, she’s been waiting for her husband to return for her. But then her brother-in-law Samir, a Bollywood director, appears with divorce papers on behalf of his brother. An Indian wedding, sumptuous food, mistaken identities, and tons of chemistry ensue. It’s sexy, incredibly romantic, and a fascinating look at modern India and all the entanglements of tradition, true love, even feminism.

Captured by Beverly Jenkins. Jenkins is a celebrated romance novelist, and her Captured pops up on a few “best romances” lists, like this one. Privateer (I love a fancy word for “pirate”) Dominiq LeVaq captures a British ship and falls in love with the gorgeous slave Clare Sullivan. He offers her freedom if she’ll spend one night with him. She knows he’s using her, but she wants her freedom. After their incredibly steamy night, she wants more than just her freedom.

The Curse of the Brimstone Contract by Corrina Lawson. Our own co-founder Corrina is a romance novelist herself, and Brimstone is her latest novel. A steampunk romance set in Victorian London, this one is all about detective Gregor Sherringford and his investigation of magical crimes. His latest client is Joan Krieger, a steampunk fashion designer who needs his help. Magic and technology are the backdrop for their love affair.

Fated Love by Radclyffe. Radclyffe’s romance is a popular LGBTQ pick. Quinn Maguire was a trauma surgeon, but now she’s accepted a job at a new hospital as an ER doctor. This seems like a step down to many around her–including her new boss Honor Blake, who thinks Quinn is hiding something. Honor is struggling with her own secrets, and the women are constantly thrown together in situations where they fight against their obvious attraction to each other.

Lord of Scoundrels by Loretta Chase. Chase is another hugely celebrated romance author, and this is another book that pops up on lots of “best romance” lists. It’s the kind of classic that uses the word “rake” without a hint of irony. Jessica Trent heads to Paris to rescue her useless brother, who is spending too much time with known rake Sebastian Ballister, Marquess of Dain (I mean, the names are just too amazing). And, of course, a love affair between Jessica and Sebastian develops, complete with scandal and destroyed reputations and intense passion.

Naked in Death by JD Robb. Robb is a pen name for Nora Roberts, and Naked is the first book in her In Death Eve Dallas series. This was a book I picked up in one of Audible’s $5 sales several years ago, and I couldn’t put it down. NPR agrees with me! Eve is a tough, ballsy NYC detective hunting a killer. And then she meets rich, Irish Roarke, who just happens to be a suspect in her latest case. But their attraction is hot and intense. If you like romance and crime procedurals, this one is pretty great.

Night Pleasures by Sherrilyn Kenyon. Although Amazon says this is the second book in the Dark Hunter series, Kenyon herself confirms that this is the first book. If you’re looking for a paranormal series, this is a great one. Kyrian is an immortal who protects the human race without us even knowing it. He’s been around for centuries, he’s rich and powerful. And he falls in love with accountant Amanda Devereaux.

Outlander by Diana Gabaldon. The sexy, sweeping series set in the Scottish Highlands is having a huge moment because of the hit show. But even if you’ve seen the show, read the books. The first one is so intense I actually blushed a few times. Claire Randall is happily married in 1945, a former war nurse. Then she’s transported back to 1743, to wilder times with Scottish clansmen fighting some truly sadistic British troops. So many complications arise from this when she meets Jamie Fraser, basically a gorgeous Viking god live in the flesh. So much flesh. This book is full of history…and flesh.

Pilgrim of the Sky by Natania Barron. Natania is another GeekMom author, and this is her sweeping contemporary fantasy. Maddie Angler thinks her boyfriend Alvin is dead, but when she discovers he’s alive she also discovers the existence of eight separate worlds that need to be saved. Tons of world building, playing with space and time, all with some sex appeal built in.

Pride and Prejudice by Jane Austen. I’ll state for the record that I think this is the most romantic book ever written. I love everything Austen writes, and I could make a case for any of her novels taking that title. But there is just something undeniable about Elizabeth Bennet and Fitzwilliam Darcy that is just for the ages.

The Princess Bride by William Goldman. If the more physical aspects of romance novels aren’t quite your thing, but you still want a great love affair, I think we can all agree that The Princess Bride will tick every box. Make no mistake, if you’ve seen the movie you should know that even a fairytale based around a perfect kiss can be absolutely dead sexy.

Shards of Honor by Lois McMaster Bujold. This is the first book in the Vorkosigan saga, and a recommendation from GeekMom Corrina Lawson. At one point Shards of Honor and Barrayar (Bujold’s 8th book in the series, but the second one chronologically) were sold together as Cordelia’s Honor, but those editions are out of print. But if you want to start at the beginning of this scifi romance series, Shards of Honor introduces Cordelia Naismith as she is taken prisoner by Commander Aral Vorkosigan of Barrayar.

Take the Survey! What Character Traits Do You Most Want to Instill in Your Child?

Passover and the Legend of Golem

Ready to ‘Get Pop-Cultured’ Again?