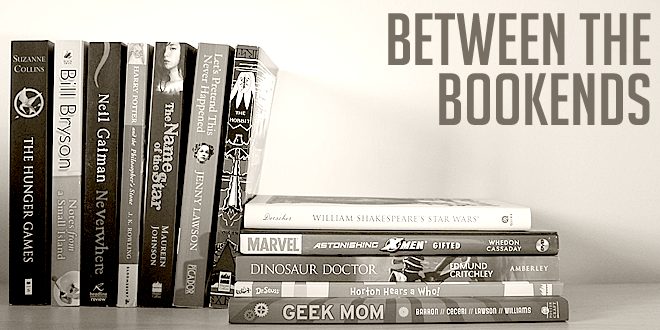 The holiday period can make it tricky to squeeze in reading time, but the GeekMoms still managed to clock up plenty of reading material. This month’s selections include books on alternative and real-life history, Wonderland and werewolves, yoga and classic sci-fi, and teaching kids both how to draw sharks, and how to value money.

GeekMom Sophie‘s book club picked The War of The Worlds by H.G. Wells, admittedly one of her own choices, to read over Christmas. The book was chosen partly because of its length – at only 192 pages it seemed short enough for people to manage over the busy holiday period. Sophie found herself quite surprised by the style of the writing. Rather than a traditionally told story, Wells writes as a survivor of the event giving us as readers, his account of the events of the Martian invasion as best he remembers them. This gives the book more a feeling of a memoir or a historical narrative than a work of fiction. Sophie particularly enjoyed how British the story felt, with one specific scene standing out in her mind as two men talked over the garden fence and traded both news and garden produce while the milkman went about his rounds, and not two miles away Martians were acknowledged to be constructing something unknown at their landing site!  Although the ending was far from a surprise, Sophie still found herself somewhat disappointed by how suddenly the tale came to a close, finding that it had more of a sense of the author not knowing how to continue than of a deliberate conclusion.

Although she was in the middle of reading The War of The Worlds, when Sophie had to take a trip to London in late December she decided that her large, hardbacked edition of the collected tales of H.G. Wells was too much to carry around all day. Instead, she took her kindle and picked something at random from her to-read folder. That choice was Too Much Information… Or Can Everyone Just Shut Up For a Moment, Some of Are Trying to Think by British comedian Dave Gorman. Gorman is well known for his observations of the weirdness of everyday life when you start to really examine it – the focus of his current TV show Modern Life is Goodish – and this book explores many of those ideas in more depth. There are chapters on the bizarre tactics employed by marketing agencies, how non-sensical small print can be if you ever choose to really look at it, the creation of fake Twitter accounts, and how (and why) people attempt to manipulate Twitter and its ilk. Sophie was rather taken aback by Gorman’s sudden divergence into badger glove puppetry at one point but enjoyed the book as a more detailed version of one of her favorite TV shows.

Sophie has also been reading a lot of books with her six-year-old son over the Christmas break. They spent an afternoon learning to draw sharks together and posting their results on Instagram thanks to Arkady Roytman’s How to Draw Sharks step-by-step guide. Sophie was very impressed by her results given how unconfident she is at drawing freehand, and the steps were simple enough for her son to make a good attempt by himself.

Late last year, GeekMom Patricia and her husband discovered the Amazon Instant Video series The Man in the High Castle. They were so captivated by Season One of the series, Patricia downloaded the original Hugo-award-winning novel on which the series is based. The book titled The Man in the High Castle is by acclaimed Sci-Fi author Phillip K. Dick, who you might know from such film adaptations as Blade Runner, Total Recall, and Minority Report. Some might argue whether this is a “Sci-Fi” novel or not since it’s neither science nor is it set in the future.

The Man in the High Castle, the novel, is an alternate-history story, set in the 1960s world in which the Axis powers won World War II. The United States gets divvied up between Japan and Germany, analogous to how Germany was divided in reality. Similar to the Cold War between the United States and the Soviet Union, there is an uneasy relationship between Germany and Japan, and every little hiccup in the geopolitical landscape has ramifications on the Greater Nazi Reich (east of the Rockies) and the Japanese Pacific States of America (west of the Rockies). There are hints of some of the changes Germany and Japan made to the political landscape, such as “dealing with the Africa issue” and the treatment of Chinese as slaves. Readers will follow the stories of several characters as they discover a resistance movement and attempts to help it grow…or become suppressed.

The end of the novel is almost abrupt (and quite different than the television show), but the final chapters will command your attention. This is a fun, fast read.

GeekMom Cait just finished The Signature of All Things by Elizabeth Gilbert and enjoyed every minute of it. She’s a sucker for a big, heavy book, especially over a holiday break! Switching gears a bit for the New Year, Cait just started reading The Opposite of Spoiled: Raising Kids Who Are Grounded, Generous, and Smart About Money by Rob Lieber. Every year, Cait and her husband talk about setting up an allowance for their three children, but then life happens and they never do it. After reading this article, which talks about the best ways to “do” allowances for your children, Cait decided to pick up the book. She’s only just cracked the cover, but already she has enjoyed heaps of food for thought.

Cait’s kids (ages 7, 6, and 4) are enjoying a month of biographies. A few months ago, Cait’s friend introduced the Ordinary People Change the World series, written by Brad Meltzer, to her family. It was love at first sight! The kids have enjoyed reading about kids who grew up to do amazing things, like Albert Einstein, Amelia Earhart, Hellen Keller, MLK, Jr., Abraham Lincoln, and Rosa Parks. Cait loves the books, too. These are not the biographies of your youth. Instead, they are engaging and funny and addictive. The family can’t wait until the Jane Goodall book comes out in September!

Author Gregory Maguire had helped bring new life to the Land of Oz in his bestselling Wicked series, but GeekMom Lisa opted to follow him into Wonderland with his newest book, After Alice. This story follows a different visitor down the rabbit hole, a briefly mentioned character from the original Alice in Wonderland story, Alice’s friend Ada.

Ada takes a tumble down the rabbit hole not long after Alice’s disappearance and spends a good deal of time pursuing her friend. One aspect of the book, which Lisa didn’t enjoy as much as she thought she would, was its tendency to jump from Wonderland to the “real world” Victorian England, where Alice’s sister, Lydia, is also trying to find answers for her sister’s disappearance. The narrative is lyrical and very much a tribute to Carroll’s playful style, but the transition from world to world was a little inconsistent and distracted from the more interesting adventure into the rabbit hole itself.

After Alice had reminded Lisa another favorite non-Alice-centric Wonderland adventure she enjoyed even more, the aptly titled graphic novel Wonderland by Tommy Kovac and Sonny Liew. This compilation of the six-issue comic series, features the often-mentioned Mary Ann, housekeeper for the White Rabbit. Despite realizing the White Rabbit is quite inept at distinguishing one human girl from the other (hence the reason for the famous Alice in Wonderland case of mistaken identity), Mary Ann is very much at home in Wonderland. She is smart, resourceful and bears an almost OCD knack for cleanliness. She does get to face her own adventures featuring the Queen of Hearts, Queen of Spades, Cheshire Cat, the Jabberwocky and other familiar and new Wonderland faces.

This graphic novel can easily be read in a leisurely afternoon, and is a recommended companion to After Alice. Once the reader follows the adventures of Ada and Mary Ann, they’ll begin to see Alice herself is just a small part of the wonderful and wild Wonderland landscape.

Lisa is also currently making her way through the Edgar Award-winning novelist Andrew Klavan’s latest, Werewolf Cop. Despite the obvious title, this book falls neither in the form of a goofy parody or an emo supernatural love story. It starts out as a fast-paced crime thriller on its own, as Texas detective Zach “Cowboy” Adams, is on the hunt to take down an underworld gangster. This journey takes him takes him out of his comfort zone to Germany, where, the story — and Adams’s fate — take very strange and bloody turn.

Klavan is well known for bestselling suspense thrillers like True Crime, but Werewolf Cop is more her style. Yes, it’s dark and gritty,  yes, it’s quite funny at times, and it actually has a some “jump scare” moments, but the reader will also find themselves drawn into the soul-crunching journey Adams takes as he not only has to deal with the evils of organized crime but his own newly-acquired inner monster. Will this edgy suspense and emotional attachment remain throughout the novel? That remains to be seen, but Lisa certainly hopes it does.

GeekMom Fran has stolen her spouse’s copy of The Thing Explainer, from xkcd.com creator and line-drawing genius Randall Munroe. You can hear her chuckling over there in the corner. When not otherwise occupied, she’s also reading Jerry Brotton’s The History of the World in 12 Maps — a history of cartography — and three novels: Charlie Jane Anders’ All the Birds in the Sky  – about what happens when a witch and a mad scientist meet (adult SF); Barb Ferrer’s Between Here and Gone  – set in the 1960s about a young Cuban emigree, which got a recent Romantic Times rave; and Silver on the Road by Laura Anne Gilman a second time because the first was just that much fun. She also recommends The Drowning Eyes, a weather-magic novella with excellent nautical writing by Emily Foster, which she had the pleasure of reading for a blurb last fall.

GeekMom Rebecca Angel picked up what she thought would be a fluffy romance for Christmas with A Christmas Hope by Anne Perry, but is wasn’t! Yes, the novel was a quick read, set in Victorian times, but romance was not even part of the plot. The main character, Claudine Burroghs in stuck in a loveless marriage and upper-class shallow society. She volunteers at a hospital for prostitutes, which is her only source of fulfillment. Then a murder mystery presents itself at one of her required high-class balls. She is determined to find the truth, regardless of what society (and her husband) thinks of her.

As You Wish by Cary Elwes, who played Wesley in The Princess Bride took Rebecca behind the scenes from pre-production to filming to afterward of one of her favorite movies. The book was a gift from a friend, and brought many smiles during the reading. The chapter on Fezzik was her favorite. For fans!

Currently, Rebecca is reading Hunger, Hope, and Healing by Sarahjoy Marsh. It’s not a weight-loss or exercise how-to book, instead it is a way to find out the root cause of unhealthy habits and thinking associated with food. Rebecca is already a yoga lover, so she figured this would be a good way to jump on a happier path to health. 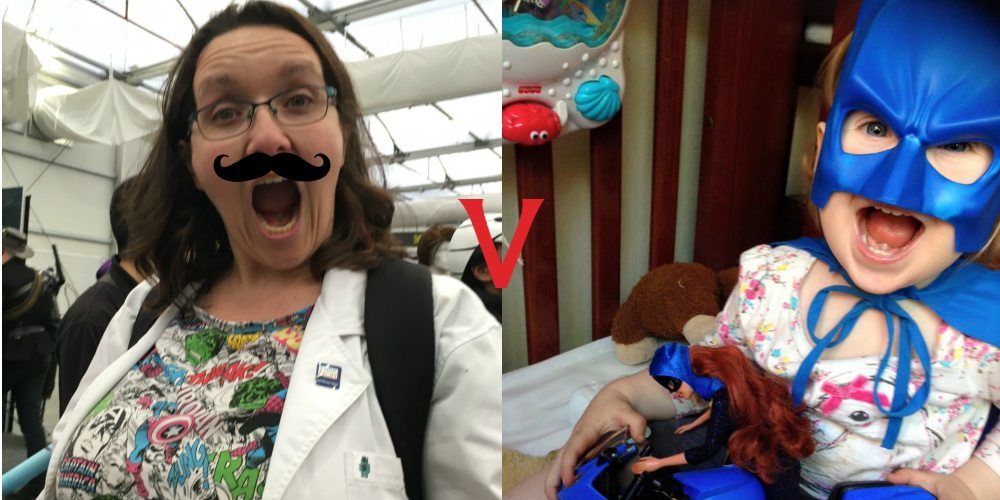 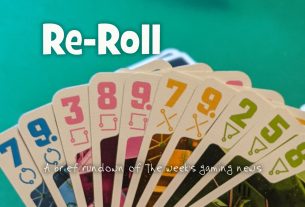 Set Sail With a ‘Pirates of the Caribbean’ Reading List