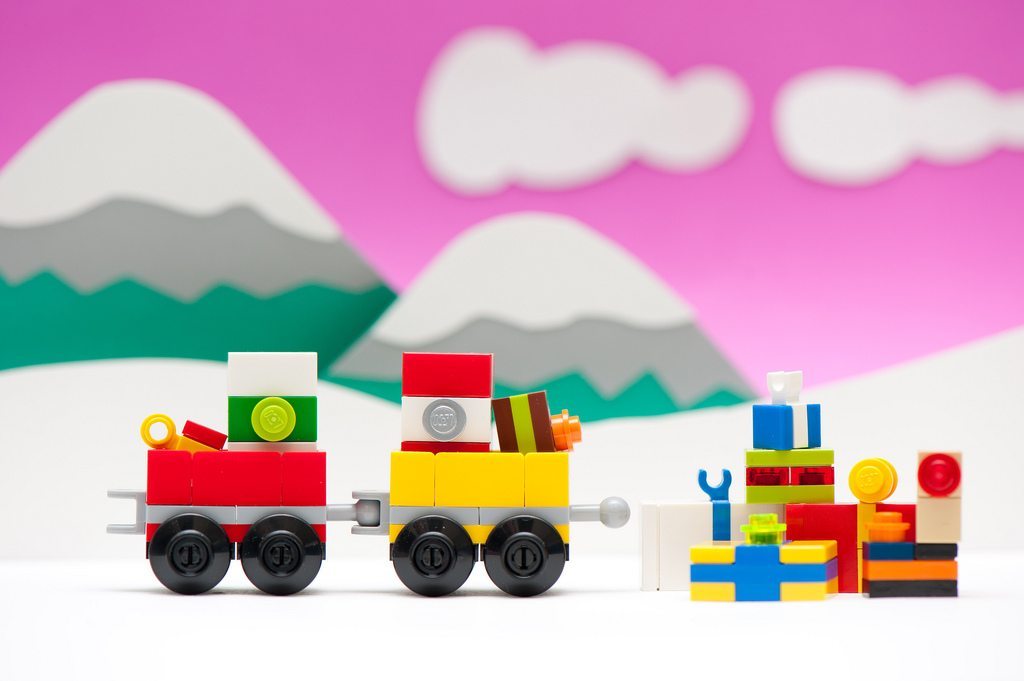 Given that there are more than five million Lego bricks being made every hour (yes, really!), there’s a good chance there will be a box of them under your Christmas tree this year. But why just wrap them up in paper when you can get more creative with your Lego gifting? Here are four ideas to try:

Lego sells ready-to-go Advent calendars. Each day you open a panel and get a minifig or tiny set. They come in a variety of themes, including Star Wars, City, and Friends. This year there’s also a Minions-themed Mega Blocks calendar. But I’m more of a DIY-er.

There are two ways you could go to build one on your own. You could get small sets, like minifigs, Mixels, and the small polybag sets. It won’t be a cheap Advent calendar, but it’s an option! Or you could split up a set and dole out a few pieces each day. The most straightforward way would be with the Creative Supplement (which also comes in the bright Friends-set colors). It’s a box of 303 basic bricks. You could either put a dozen or so in the calendar each day, or you could use it as a countdown or count-up. With 303 bricks, you could give 1 on December 1, 2 on December 2, and so forth all the way to Christmas Eve (or vice-versa with 24 on December 1 counting down).

If you’d like to build anticipation a little more, you could do the same with an actual set. To reduce the torture, be sure to give out the pieces in the order it takes to build the set! A few sets with just about the right number of pieces for the countdown method are:

If you don’t already have an Advent calendar, there are lots of ways to make them. You can buy them or find instructions for making them all over the internet. Last year I used 24 of these stackable storage boxes and put anything too large to fit in them in our “magical monkey box” (a gift box shaped like a monkey) with a note in the storage box to ask the monkey. This year I’m making this gingerbread house calendar.

One of our favorite holiday traditions is the Christmas morning scavenger hunt. It started when I had a large gift for one of our kids when she was little, and I didn’t want it to dominate the morning and make her ignore everything else. So I hid it upstairs and sent her on a scavenger hunt to find it after everything else was opened. Every year since, we’ve done this, and as the kids get older, we’re able to make the hunts more difficult.

For the 2014 hunt, I had a Lego set that I’d bought on clearance because the front of the box was ripped. I took advantage of that by pulling out all the bags of bricks and replacing them with the first scavenger hunt note. Each subsequent note had a few more bricks until finally at the end, the whole set was back together.

This one is for the people who give a lot of Lego sets. I was inspired by the assortment of book trees I’ve seen floating around. You could add in some Lego books (or other books—make a whole gift tree!), wrap it in lights and tinsel. Who wouldn’t want to wake up to that on Christmas morning?!

The boxes do slide a bit, so stack carefully. If you’ve got freely roaming pets in the house, this might not be the best plan.

As a tangible part of an intangible gift

I’ve noticed a trend in the last few years of families gifting themselves a big trip for the holidays. It’s a great idea, especially when your kids already have way too many toys. But there’s also something to be said for having a tangible thing to unwrap. With the wide variety of Lego sets available, there’s almost certainly something relevant.

This idea was inspired by the Flatiron Building in the Architecture line. For my family, this set was a good way to reminisce about our 2015 trip to New York, but in the reverse, it would be a great gift as a preview of a trip to the Big Apple. It’s a distinctive edifice in a city that can start to look like repetitive buildings after buildings to small eyes. Bonus, they’re likely to recognize it from TV shows and movies, including Spider-Man and Teenage Mutant Ninja Turtles. I found the Flatiron somewhat more difficult than other Lego sets to build, so you may need to offer some assistance for smaller children with less dexterous fingers.

The Architecture line is perfect for this trip-previewing gift project. There are sets available for Paris (Eiffel Tower and Louvre), Rome (Trevi Fountain), DC (Lincoln Memorial and White House), Seattle (Space Needle), London (Big Ben), and more. There are a few older sets no longer in production that you can still find, but you’ll pay a premium for them.

You could use other sets more creatively for specific types of trips. A trip to Disney could be previewed with one of the Star Wars sets, since, of course, you’ll be riding Star Tours! For a cruise, you could choose one of the Pirates sets. For a rural road trip, perhaps the Minecraft set The Farm. And for kids who don’t agree on worlds for their minifigs to live in, that one is a good opportunity to blend. The Friends and Elves can help Steve on the Farm, or he could be growing crops for the residents of the City sets. Put together a combination that reflects your plans so that you can pass the time until you go!

Ready for one last Lego challenge? I think you could turn The First Night into a Minecraft nativity scene. A little minifig creativity required. Happy building!

Disclosure: I recently received the Flatiron building and Minecraft Farm sets for review.

Fund Childhood Cancer Research With Heroes For a Cure