My parents likely made several questionable parenting decisions during my childhood, not the least of which was taking me to see the original Nightmare on Elm Street on the big screen at the tender age of five.

It could have gone horribly wrong, but it instead started a life-long love of all things horror.

I love scary movies, scary comics, scary stories, and scary podcasts. In honor of Halloween, which is my favorite holiday (surprise!), I’ve compiled a few of my favorite scary podcasts to share with you all. I listen to podcasts on many subjects and I really enjoy them because they allow me to listen while doing chores, driving, writing, and whatever else I end up finding myself doing during the day.

If you also enjoy things that go bump in the night, then you’ll likely find that at least one of these podcasts has something for you. Some are fiction, some are not. I’ll leave it up to you to decide which is which.

This one takes legends that you’ve likely heard about before (Bigfoot, anyone?) and gives them a new spin by digging deeper and interviewing or telling the stories of people who have had first hand encounters. The latest episode, “Kidnapped by Bigfoot,” tells a really fascinating story of a man who claims that he was… well… kidnapped by Bigfoot. I know that the mere mention of the big hairy giant is a non-starter for some people, but give this one a try. Most episodes are an hour or more, but they are engaging and free from profanity, so the (age-appropriate) kids can listen too.

The American South is ripe with stories of ghosts and mysteries of all kinds. There’s just something about those humidity-laden nights that brings out the spookiest of tales. This podcast focuses exclusively on that region of our country. And there is no shortage of material. The South also has a rich history of storytelling, and what I especially love about this podcast is that most are told by folks who definitely fit the bill of a great storyteller. Most of these are very short at 10 minutes or less. You can easily get in a quick scare between school pickups and practices. I haven’t heard anything that I wouldn’t play in front of children who can otherwise handle a ghost story.

Most of us have sat around a campfire at some point and listened to, and maybe even told, some scary stories. It’s practically a right of passage for adolescents and that’s the idea behind this podcast. Each episode, hosted by Jim Harold of course, consists of several people calling in to tell their true stories of the supernatural. It’s this aspect of it that makes it so great.

Hearing the stories straight from the person who experienced it definitely adds to the campfire atmosphere in ways that hearing them from a professional storyteller just does not. Each episode is about an hour, but features several individual stories within. These stories actually feel scarier than the two podcasts mentioned above. I think that’s because they’re told first-person. Although I’ve not found any profanity, etc., I do think I would recommend listening to a couple before letting the children listen (if they are so inclined). I would probably only allow my 12-year-old to listen to this one.

From the creators of Pacific Northwest Stories (have fun looking that up), The Black Tapes Podcast started when host Alex’s quest to create a podcast about “odd” jobs landed her an interview with a paranormal researcher. After that, she decided to ditch the original idea and make the entire podcast about the field. In these episodes, she works with the investigator as he works his way through his “black tapes.” These are the ones he hasn’t been able to debunk…yet. This is one that should be listened to from the beginning to gain a full understanding of what they’re trying to do. Most are less than an hour and so far there are only 12 full episodes. I probably would not share this one with my children as there is some language and adult situations that come up.

Another absolute gem from the creators of Pacific Northwest Stories, Tanis is the newest podcast on my list. There are only three episodes so far and I am hooked. Tanis explores the mystery of… well, Tanis. It’s something that’s mentioned throughout the years as a quasi-place that no one can seem to find. But the evidence of its existence is compelling, to say the least. Host Nic Silver tries to unravel some of the mystery through interviews and some seriously hard-core research. So far, he’s created as many questions as he’s answered, but I cannot wait until the next episode. I would definitely not let my children listen to this one.

Lore is probably my all-time favorite podcast. It was started by Aaron Mahnke in March of this year and each episode is a stand-alone story. Aaron finds stories that are, at least for me, relatively unknown and gives us an introduction and expertly explores the truth behind the mystery.

I’ve been on more Wikipedia rabbit-holes as a result of this podcast than probably anything else in recent memory. Each episode is usually only twenty-some minutes, but he gives us just the right blend of information, mystery, and longing for more. Aaron Mahnke is a brilliant storyteller and he definitely has a voice for radio, or podcasting in this case. I’m comfortable letting my older children listen to this one, but with caution on some topics. It definitely has a healthy dose of realism.

What about you? Any podcasts you would add to the list? How do you get your spook on? 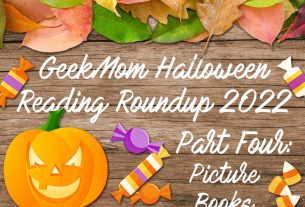