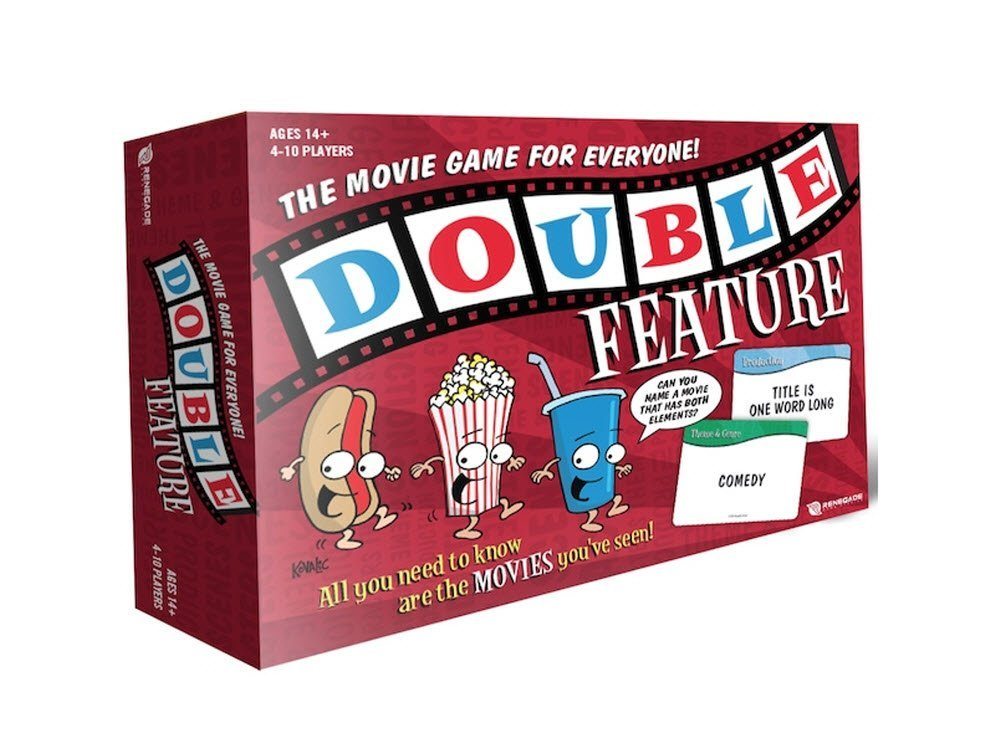 Double Feature is a trivia-adjacent game, in which players shout out the names of movies that meet the requirements of the two face up cards. Each card has a feature of a movie, such as a setting, character, or prop. The player who comes up with an answer first gets one of the criteria cards, and another is placed. The first player to collect enough cards wins the game. The number of points needed varies according to the number of players. The concept is printed clearly on the box: “All you need to know are the movies you’ve seen!”

Setting up the first time, we realized that there were very few rules, 120 cards, and lots of room for fun. The six features are Characters, Production, Props, Scenes, Settings, and Theme & Genre. Set up took about 15 seconds. Play began immediately.

We chose our first two categories randomly, and assigned myself as the Director (current judge). It was my task to decide the winner. Play flew quickly. We started with “HAS OR IS A SEQUEL,” and “GOLD, DIAMONDS, OR PEARLS.” The Fellowship of the Ring took the first victory. The player took the Production card.

The next card played was chosen by the current director, the player to my left. They chose to flip a Theme & Genre card, which happened to be “ROAD TRIP.” This combo was immediately snapped up by another person in the group with Diamonds, a fun film from 1999. The player received the Props card, because it had been face up longer. This keeps the criteria rotating, keeping players from stalling over a particular feature.

The best part of this game in our group is that the goal isn’t coming up with one specific movie, making it less about trivia, and more about connecting dots in movies you already know. With Double Feature, every player can use movies they know personally. This makes it easier to play with young kids, or with people you might not know well. Players just stack their cards in a staggered fashion, so it is apparent to all players how close to the end of the game they are.

Everything you need to play is in the box. The cards are decent quality, with the art done by the amazing John Kovalic. The box is a bit big for its britches, though. A small rulebook and one 120 total cards means this game could have been packaged in half the size. Not a deal breaker, but it does take up a bit more room than I’d like.

Play is suggested for 10+, but I can tell you our 11-year-old had a hard time. As a shout-it-out game, he struggled with getting answers out in time. Both of our kids struggled to play with adults, because of the huge number of movies adults are exposed to, even if they don’t watch them. I’d encourage kids to play with kids around their own ages. Adults should be prepared for thousands of movies to be fair game.

Play is intended for 4-10 players. A four player game requires ten points to win, meaning it has a maximum of 36 rounds, and can be finished in ten minutes, provided players are on point. An eight-to-ten player game requires six points to win, with a maximum of 46 rounds. Expect games to take significantly longer with more players, though. A ten player game can take anywhere from 15 and 40 minutes, due to the sheer number of players, and inevitable squabbling over who answered first, or whether an answer might be valid. Our group finds it easiest to play with a maximum of seven players. After that, it’s hard for everyone to keep track of the game.

I totally suggest this game for smaller groups, or when players need a palate cleanser without too many rules. I’ve taught the game in less than twenty seconds, and finished games quickly many times, regardless of number of players. Double Feature runs $14.99 on Amazon.

GeekMom Talk Like a Pirate Day!: Ahoy Matey, No Parlay In These Rules