My husband and both sons are all Uncle Grandpa fans, eagerly awaiting each new episode, especially since Season 3 started last month.

So perhaps you’re wondering: What’s Uncle Grandpa about? Most of the stories follow the (mis)adventures of Uncle Grandpa and his friends, who include his Belly Pack (a talking fanny pack), Pizza Steve (a vain slice of pizza, voiced by Pitch Perfect’s Adam DeVine), Mr. Gus (an analytical dinosaur), and a realistic cutout of a tiger.

Yes, you read right. I know, I know, the strangest thing. I thought so too. The animation itself is rather basic, drawing on influences from Mad, The Far Side, and classic Looney Tunes cartoon characters. After my sons watched most of Season 1 without me, they convinced me to watch several episodes from Season 2, and I enjoyed the review of Uncle Grandpa: Good Mornin’ DVD as well.

The cartoon is hilariously surreal, filled with personified objects and hilarious personality conflicts that will leave both the kids and adults laughing. The plot lines are clever, and many of the episodes’ antics will leave you nodding in agreement, thinking, “Yes, I’ve thought those same silly things when <insert mundane task here>.”

In the Good Mornin’ DVD, you will enjoy the following 12 episodes from Seasons 1 and 2:

Many of the 11-minute episodes are capped with parody commercials and how-to videos between 1-2 minutes in length. On Episode 12 of the DVD, be sure to watch for the commercial for “Uncle Grandpa Babies“, which pays homage to Muppet Babies, A Pup Named Scooby Doo, and The Flintstones Kids cartoons from the 1980s. I got a kick out of Pizza Steve as a ball of dough with a diaper.

Like many of the other Cartoon Network compilation DVDs, there are no bonus features. There is a simple menu that allows viewers to choose episodes to watch, or else one can choose to play all of the episodes in order. In addition, these episodes aren’t in order of original air date. In the context of this series, that shouldn’t matter. Each short stands alone perfectly well.

Cartoon Network’s Uncle Grandpa: Good Mornin’ on DVD is available starting 7 April 2015 and will retail for $14.97, although I saw it on Amazon for only $9.98. The DVD makes a perfect gift for elementary-school-aged kids…and their parents!

GeekMom received a review copy of this product for review purposes. 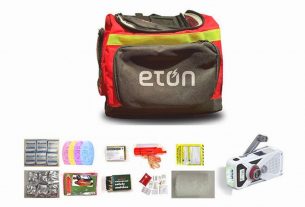